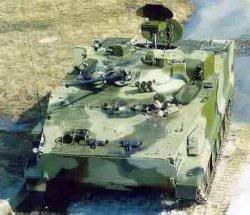 We bring to your attention the informational message “Italian impostor and Russian BRM-3K“ Rys ”(pictured), published on the portal“ Herald of Mordovia ”29.06.2013. For more information, please contact the Department of Strategic Communications Concern Tractor Plants.


In 90-s of the last century, Russian designers developed a number of promising models of equipment, which at that time were among the best in the world. But, unfortunately, for a variety of reasons, primarily economic, these combat vehicles did not enter service.

One of these models is the combat reconnaissance vehicle BRM-3K "Lynx", which was equipped with modern equipment.

According to the manufacturer's website, the machine, weighing 19 tons, was intended for conducting troop reconnaissance at any time of the year and day under conditions of limited optical visibility. For this purpose, a thermal imager was installed on the “Lynx”, which can be seen at 3 km.

The maximum range of detection and identification of targets using an existing radar station is about 12 km. So the tank is found at a distance of about 10 km, and people - at a distance of 4 km.

The machine has a place to store the anti-tank guided missile system (ATGM), 6 small units weapons and 15 hand grenades. In the case of the car there are 2 embrasures for shooting from small arms.

BRM is equipped with navigation and orientation equipment, an electronic computer for information processing, communication and data transmission facilities. There is a hardware for classifying speech and digital information.

There are places for placement of equipment for the organization of a remote observation point. This BRM would be very useful during the fighting in the North Caucasus and during the war "888".

During various shows, the author had to talk with representatives of the manufacturer, and industrialists expressed the hope that the home state would still find the means to purchase the required amount of these armored vehicles from a domestic manufacturer. 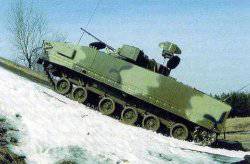 But the funds were found for another car, which the intelligence officers decided to do too. True, the manufacturer was foreign, and the car did not have even a small fraction of the equipment that was in the arsenal of the BRM-3K. As if in a mock foreign car, too, was called "Lynx". It is not clear why this was done. Maybe the people who did this simply did not know that we already have one modern intelligence vehicle with the exact same name. If this is so, then this very much characterizes the level of competence of the decision makers.

As a result, a strange situation has arisen, the real “Lynx” almost did not reach the troops, and история with an Italian impostor wallowed in a series of all sorts of scandals. Suffers from this army, exploiting, in the main, rather outdated technology. One hope is for an armored reconnaissance vehicle based on the crawler "Kurgants-25" or wheeled "Boomerang".

Ctrl Enter
Noticed oshЫbku Highlight text and press. Ctrl + Enter
We are
The project of modernization of BRM-3K "Lynx" with the use of the combat module AU-220M "Baikal" was announced.Innovation Day of the Southern Military District. Armored car "Lynx"
Military Reviewin Yandex News
Military Reviewin Google News
12 comments
Information
Dear reader, to leave comments on the publication, you must to register.