The collapse of Somali pirates 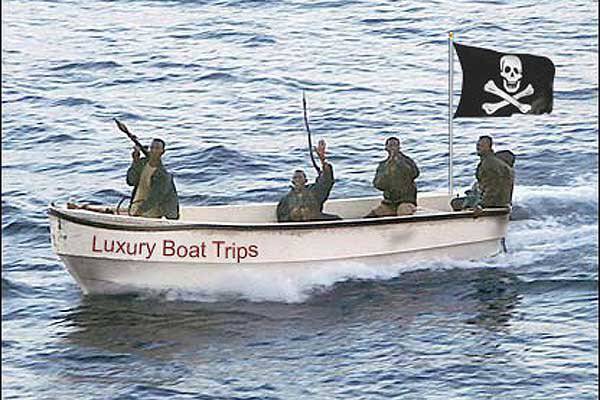 For the past year, Somali pirates have failed to seize a single vessel. The once formidable force crumbled for several reasons: the struggle of the Western Navy, and especially the most brutal sailors of India, the overbought tribal leaders of Somalia, the planting of Christianity among pirates. Gallery of pirates shows how their life is arranged.


The activity of Somali pirates has recently dropped significantly. This conclusion was made by experts of the global anti-piracy organization. For the whole year, the sea robbers have failed to capture a single ship. Just a couple of years ago, pirates seized dozens of ships off the coast of Somalia. In 2011, 129 attacks were recorded, in 2012 their number was reduced to 19, and those in the first half of the year.

What is the reason for the collapse of the effectiveness of Somali piracy? For a start, a brief report by the World Bank that explains the phenomenon of this phenomenon.

The global fight against piracy in Somalia focuses on the pursuit of pirates and the use of naval forces. However, according to a World Bank study, in order to get to the root cause of the problem, the international community needs to focus on helping the country create a functioning political system.

“Piracy is one of the manifestations of the collapse of the political system in Somalia,” says Ki-Toan Do, a senior economist at the Bank’s research department and the main author of the report Pirates of Somalia: End the Threat, Rebuild the Country. “It is necessary to fight with the system as a whole, and not just with pirates.”

According to this study, the “seizure for ransom” phenomenon in Somalia, where as a result of inter- and clan fighting and European colonization, many areas were left without functioning institutions, is based on three elements - political capital, human and financial resources. This allows pirates to attract local youth, to purchase weapon and speedboats and, most importantly, get at their disposal coastal areas where they can hold captured ships for several months or years.

Pirates in this East African country prefer places like Puntland and central Somalia, which provide sufficient political stability to do business, but not so strict government control to challenge piracy. Then they use bribes and threats of physical violence in order to tilt the scales in the struggle of politicians for power and gain long-term access to the coast.

According to the study, the political cover goes up to 86% of the proceeds from piracy. A large sum — sometimes 300 thousand dollars per ship — goes to government officials, businessmen, clans, militia and religious leaders as bribes and “development fees” to ensure non-interference by politicians in the pirated business. Teams of pirates are often hired from a specific clan or district, and their members receive significantly higher salaries than those paid by local employers. Pirates also pay more than local customers for food, energy and water. Thanks to local custom sharing of resources, income from piracy reaches local people and other interested parties, which creates a favorable political environment in which pirates can operate. 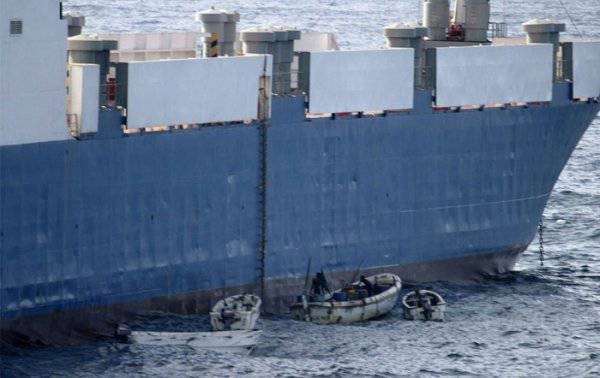 Their success has global implications. During the period from 2005 to 2012, more than 3740 crew members from 125 countries fell victim to Somali pirates and 97 of them died. It is estimated that hundreds of pirates were killed on the Somali side at sea. The ransom received during this period reached 385 million dollars. Piracy also harms trade, because shippers are forced to change transportation routes and spend more on fuel and insurance premiums, which, according to this study, costs the global economy 18 billion dollars a year.

The economy of Somalia is also affected: trade losses associated with piracy amount to 6 million dollars per year, and this is without taking into account the fact that piracy limits the possibilities of economic activity at sea. Cooperation between pirates and Islamist rebel groups also raises concerns about political stability in Somalia.

The international community has mainly focused on measures to combat piracy at sea, such as expanding naval patrols and ship security equipment, which has helped reduce the number of seizures. But in order to end piracy, these costly measures need to be strengthened and made permanent, which is unrealistic in the long run. Prophylactic measures on the coast, for example, to pay more young people so that they do not join the pirates, will only encourage boat owners to pay more crew members. Given the poverty level of the population from which pirates are usually recruited, owners can afford to pay more to pirates without significant damage to their profits. 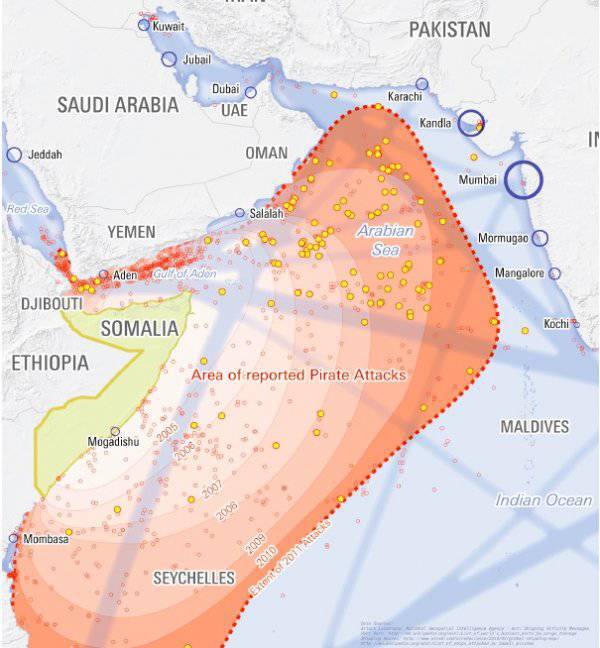 To end piracy in the Horn of Africa, the study urges that emphasis be put on those who make it possible not to deal with piracy. Since the number of suitable coastal vessels for parking seized ships is limited, piracy will be less beneficial if Somalia closes access to safe anchorages or significantly increases the cost of access to the coast. In addition, central government could offer — along with built-in controls — incentives that encourage local stakeholders to end pirates, and learn from the successes and failures of the policy of opium poppy cultivation in Afghanistan and the fight against coca cultivation in Colombia.

At the core of this policy is the need for a deeper understanding of the political economy of resource sharing in order to correctly determine winners and losers and compensate for the losses of the latter. The lessons learned from this study go beyond the problem of eradicating piracy and raise the fundamental issue of state-building in Somalia. ”

One of the ideas of the fight against pirates in Somalia - the armed opposition of the Navy of different countries - was perfectly implemented. Much has been written about these operations, we will not repeat. We mention only the fact that a tacit order to the commanders of warships said about the sinking of pirate boats without any warning. With the surviving pirates too, did not stand on ceremony. The Indian Navy, who drowned the pirates, killed and tortured them without any regret, especially remembered the robbers. 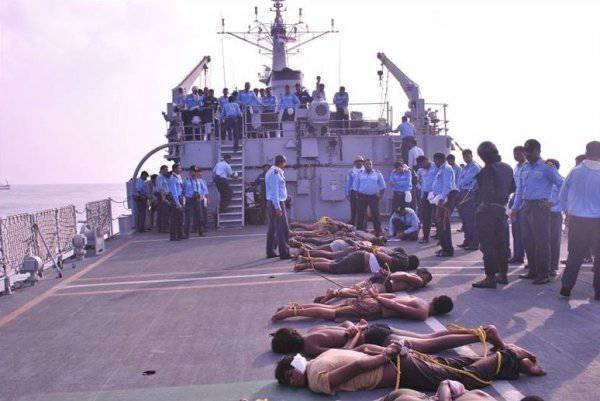 For example, in 2008, the Indian frigate INS Tabar intercepted and shot from guns a Thai fishing vessel Ekawat Nava 5, which had just been captured by pirates, with guns and did not assist the crew dying in the fire. The next day, Indian and world media exploded with reports of the first in stories sinking of a pirate ship base. The triumph lasted for almost a week, until a single surviving fisherman was picked up by a passing vessel, who told about what really happened. But there was no condemnation of the world community. That is, the Indians were the first to show the pirates that they would not be able to stand under the protection of the hostages - they would be killed all together.

No less cruelty to pirates was shown by Russian sailors. Somali robbers captured the Moscow University tanker in May 2010. Special forces from the ship "Marshal Shaposhnikov" took the tanker by storm. How events developed further - no one knows, only the final is clear - the pirates were destroyed. The capture versions were different. "Russian commandos who rescued the Moscow University tanker from captivity did not release Somali pirates, as the Ministry of Defense had previously reported (one of the versions was that the robbers were put into a boat 500 kilometers from the coast and allowed to sail freely; after an hour, they lost contact with them ), and they shot them at point blank range, put the bodies in a boat and put them into the open sea. He made such a statement through news SomalilandPRESS portal is a pirate spokesman who wishes to remain anonymous. According to him, at least 10 people were killed in this way. ”

Another way to combat piracy is to legalize them, make them businessmen or rentiers, and ensure that their income and risks from this activity are no less than from robbery. In particular, from 2007 to 2012 in the year, the leaders of Somali pirates invested around $ 100 million in the purchase of residential and commercial real estate in Kenya. Basically, the money of the naval raiders went to buy housing in a suburb of Nairobi, namely in the Eastleigh area, where people from Somalia mostly live. 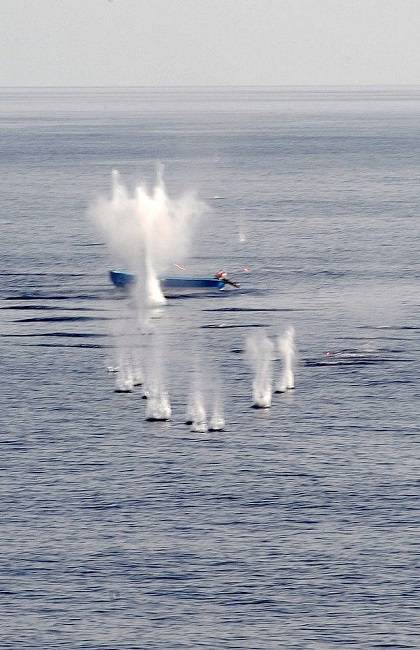 Somalia has become a testing ground for new military equipment. Since 2012, the US has been testing an MQ-8B Fire Scout reconnaissance unmanned helicopter there. The Americans installed on board the Fire Scout high-precision laser-guided missile, called the Advanced Precision Kill Weapons System. They turned this device into a helicopter version of the Predator drone so that it could destroy the target as soon as the cameras spot it. The idea is to use an infrared thermal imager under the bottom of the helicopter as a laser target designator to capture the target to hit it with a rocket.

Another way to fight is to hire private military companies for money from Western countries that have established bases in Somalia to suppress pirate activity. Especially noticeable was the PMC Sicopex, a company created by senior retired officers of the elite units of the French army and special services. Since 2010, she has served on the coast of Somalia. Her tactics are the most severe persecution of any armed persons appearing on the coast. Over the past two years, the French have killed at least 300 Somali militants. Payment services PMC «Sicopex» is not less than 50 million euros per year. 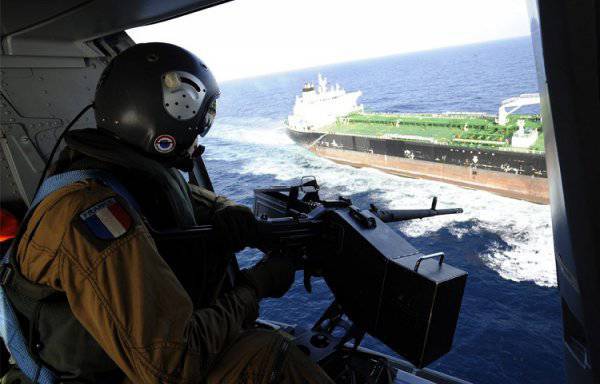 In addition to the "stick" is the West and the "carrot". Some ringleaders of pirates of the West simply paid "rent" so that they would stop doing this activity. So, Mohammed Abdi Hayer, nicknamed “The Big Mouth”, received 20 million euros for promising to resign and disband his brigade.

The West also modernized Somali prisons, and also turned the practice of keeping detained pirates in prisons in the Seychelles. The Seychelles torture chambers are recognized as one of the most violent in the world - from 2007 to 2012, there are 47 Somali pirates who died for various reasons 19 people (mortality over 40% is higher than in Nazi concentration camps).

Today, Somali pirates are serving sentences in prisons with volleyball courts, computer classes and sewing lessons. The US has allocated $ 1,5 million to a new prison in Hargeisa, the largest city in the northwest of the capital of the unrecognized state of Somaliland. And the UN has built two more prisons for Somalia, each of which is designed for 500 people. The plans of the West construction of at least two more prisons in Somalia.

Finally, in these prisons, the West is actively spreading Christianity among pirate prisoners. It is believed that the transition to this religion from Islam reduces the risk of recurrence of robbery. In the past two years alone, more than 100 Somali pirates convicted of robberies against ships in the Indian Ocean have become Christians by accepting the biblical baptism in the Seventh-day Adventist Church,

“The circumstance that radically changed the fate of the inveterate thugs, for whom robbery and violence constituted the meaning of life, was the recent permission issued by the Somali authorities to watch the imprisoned Christian channel Hopechannel,” Christian preachers say. This is the only television channel allowed for viewing in Somali places of detention.

This whole story with Somali pirates - how the West can easily invent a new story in backward societies. The colonial practices developed by the First World over the centuries continue to work successfully in our days. 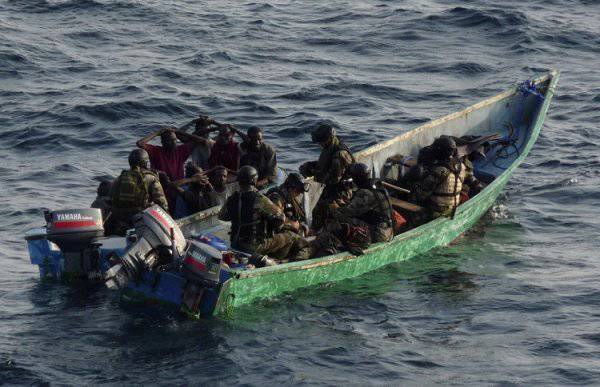 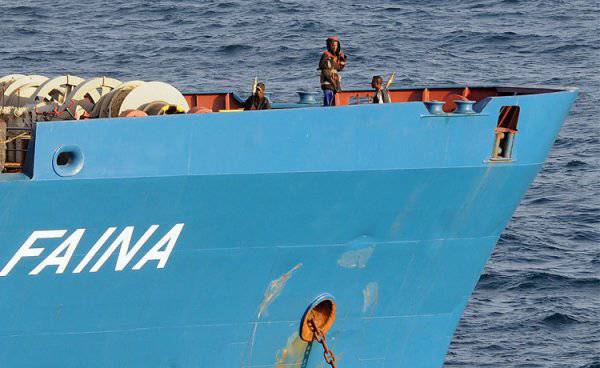 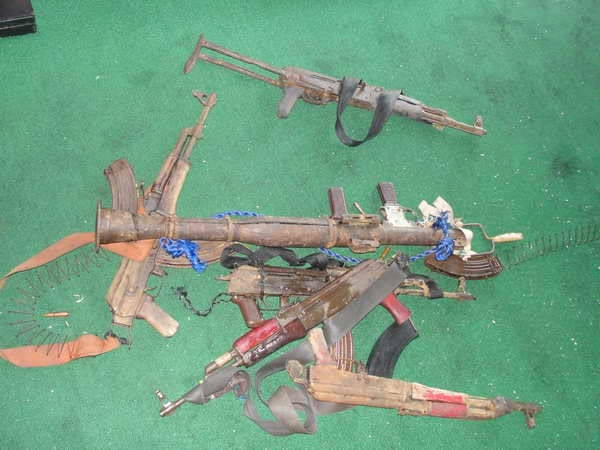 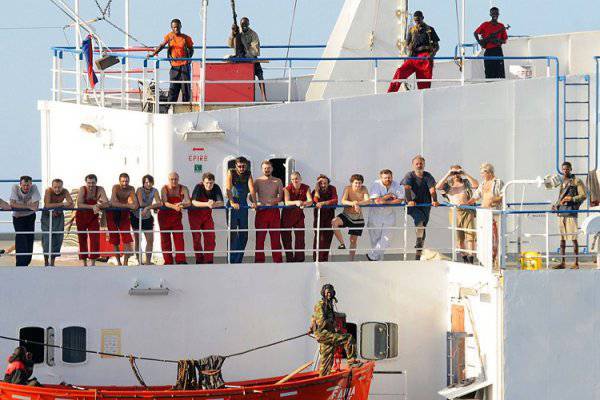 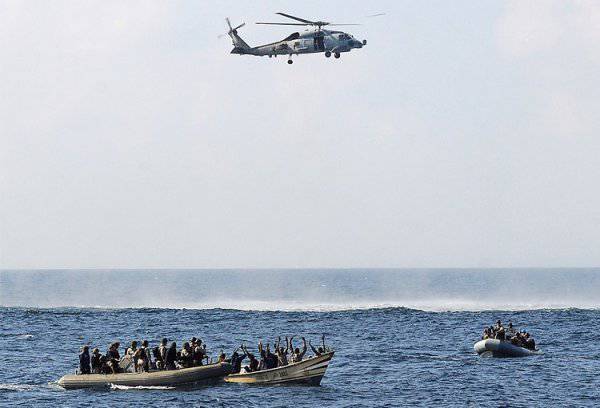 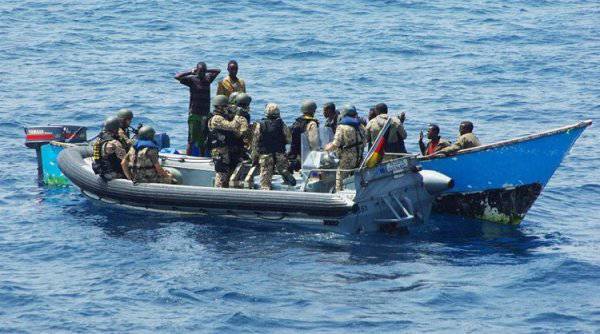 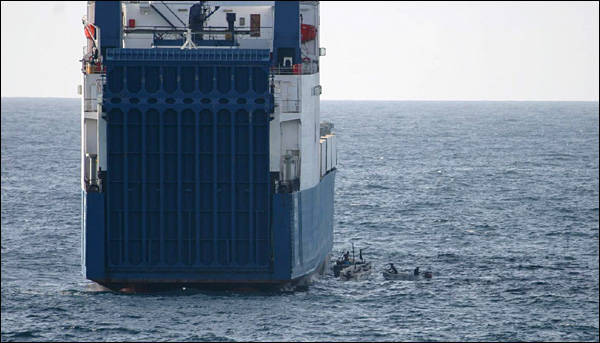 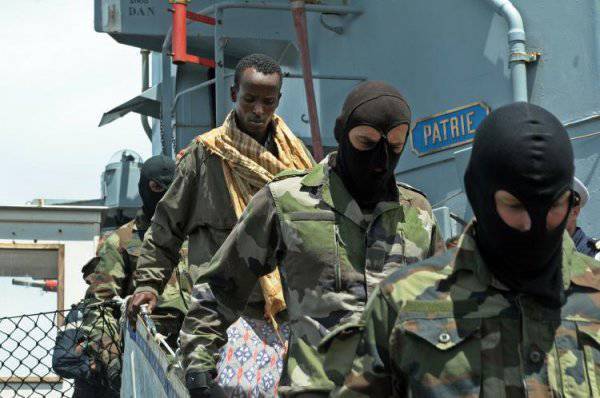 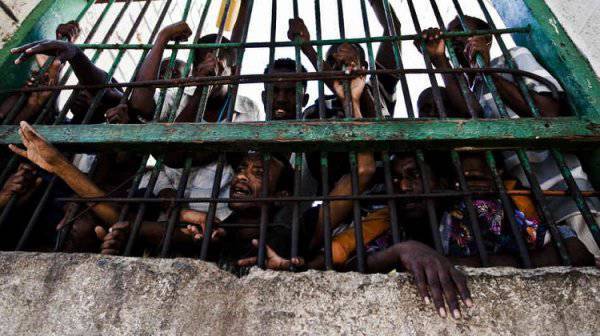 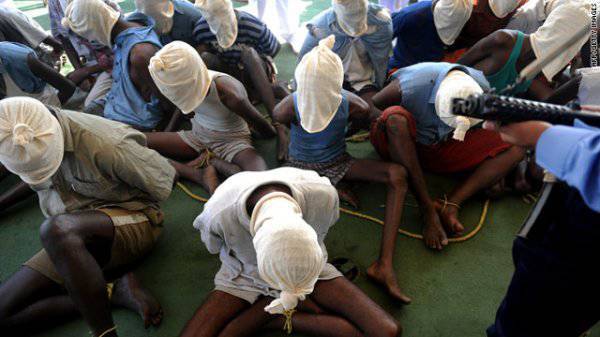 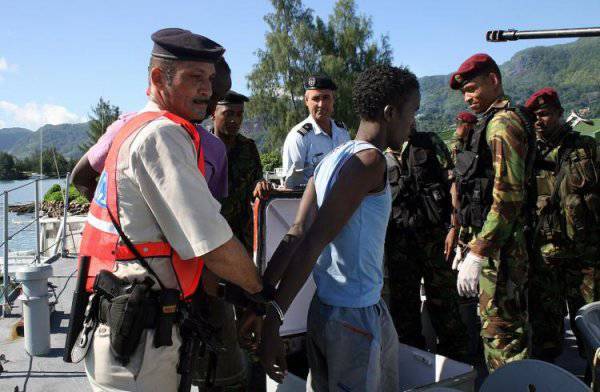