Putin's toughest speech has not yet been uttered 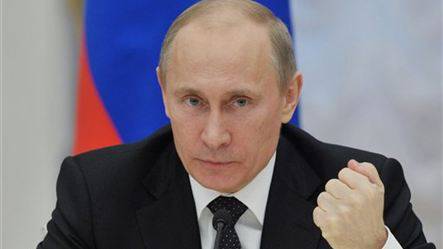 Western fears about Putin are not at all groundless, but this has nothing to do with democracy. It is already clear that Putin is trying to slow down some "undesirable", in his opinion, changes. For example, it became known that Putin dismissed the chief negotiator with Ukraine on territorial issues, Alexander Golovin, who held this post since 2008 of the year, that is, since Putin’s departure.


Putin has the understanding that democratic approaches to resolving issues postpone achieving results. It’s good or bad, but we’ve managed to achieve a little in relations with Ukraine. It may seem that there are achievements, for example, the Black Sea Fleet, isn't it enough?

It turns out a little. Black Sea deal the fleet it was only a mutually beneficial deal, it was not some kind of special political victory, namely, Putin now needs political victories. If, say, American ships no longer entered Ukraine, this would be a significant foreign policy or even geopolitical victory.

“Honestly playing” the president with Medvedev, Putin did not hang over Dmitry Anatolyevich and allowed him to play the game according to his rules in the case of Libya. For Putin it turned out to be more than confirmation of the correctness of his methods. The West’s execution of the 1973 resolution only strengthened Putin’s firmness. panicked by Putin’s arrival and will do (and is already doing) everything not to be allowed into power. The paradox, however, is that the more efforts the West makes in its struggle with Putin and his discredit, the more crushing his victory will be.

There is no need to blame the Russians, here you need to blame the completely mediocre leaders of the highest echelons of the power of the European Union and the USA. They are accustomed to Yeltsin’s weak and supportive Russia, who has surrendered one milestone after another. If Putin has hatred for the West, then the West itself has raised this hatred.

Now he gets his own product in full measure. When Sarkozy realizes that his call to President Medvedev in Moscow may not take place only because he has the blood of Libyan people in his arms, that he is not man-made in a decent society, then perhaps the understanding of the crime of the crime will come to him.

Incidentally, this gesture of Medvedev may cost Sarkozy a career. Who will vote for the president with whom they simply do not want to talk? Sarkozy received a knockdown from President Medvedev, it is possible that he will receive a knockout from Putin already. French presidential elections will be held on April 22, just six weeks after the elections in Russia. However, this time will be enough for Putin, if that is his will, to leave Sarkozy without a place in the Elysee Palace. Only two statements in a negative way about the actions of President Sarkozy, can force him to start packing his bags.

This is not an exaggeration. Lavrov’s negligent attitude toward meetings or conversations with Hillary Clinton led to talks in the Washington corridors about her uselessness in this post. Now her department is completely demoralized and can not articulate anything but her own powerlessness. Probably everyone drew attention to the fact that the head of the State Department almost does not appear in public, her statements are even more unfortunate than before and their number has become minimal. And this is at a time when such serious foreign policy events take place in the world ... boggles the mind.

Sharply started his career, Michael McFaul is now almost no nose from the Savior House. Who can remember what the last he said or did?

Some vague meeting at the Ministry of Defense and a statement from the Russian side clearly shows that in this case the level of the meeting prevailed over its meaning. In Washington now is a complete commotion. No one knows what to do. There is no resolution on Syria and, apparently, it will not. Iran is sluggish - you will not catch it, and then Putin will soon become president. All past instruments of influence on Russia do not work at all.

Let no one be deceived by the lull before the elections in Russia. Everyone knows that Putin will win in the first round. It may seem that the opposing forces are preparing Putin for a “bath” on election day, or after the results are announced. This is a completely erroneous wait. If there is even the slightest desire to raise a rebellion, most likely Putin will have to restrain the crowd that wants to deal with the “red Germans”. It is generally better for them to leave the city for these days. The people are angry at them, not at Putin.

The military budget of Russia has already been revised, Prime Minister Putin has already announced that Russia will receive 100 new intercontinental ballistic missiles, and this at a time when the West is dreaming of reducing nuclear weapons. Do they not think in the Pentagon that the warheads of the rockets will be equipped with New Year confetti and Christmas decorations? According to some reports, over 10 trillions of dollars will be spent on rearmament over 1.5 years. Russia did not have such a budget yet.

Foreign policy changes will affect all CIS republics to the south and west of Russia. Defense enterprises, having received new orders, will be tightly controlled. Dmitry Rogozin is now responsible for this, they know this person in NATO, and his new assignment does not at all make them happy. It seems that the time of curtsies in Russian politics is over, they have not justified themselves. Everyone remembered Putin’s harsh Munich speech. It seems that the toughest of his speech has not yet been uttered.

Ctrl Enter
Noticed oshЫbku Highlight text and press. Ctrl + Enter
We are
Interview of V. Putin to Channel One and the Associated Press AgencyWhat you didn't want to know about England
Military Reviewin Yandex News
Military Reviewin Google News
112 comments
Information
Dear reader, to leave comments on the publication, you must to register.