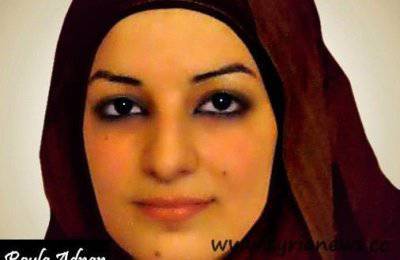 24-year-old beautiful Syrian Rula Adnan Hakuk was a deeply religious Muslim. Waking up on the early June morning, she began the day, as always, with a prayer, not knowing that he would be the last for her.


"Oppositionists" broke into the house and shot the girl right during prayer. What is she guilty of before them? Rula was the administrator of a Facebook page called “News Yabrud network ”, which described the atrocities of terrorists.

Yabrud is a small town located between Damascus and Homs. Last year, together with a group of journalists, I had to drive past a roadside cafe located on the highway. When we stopped, the owner of the institution, upon learning that we were Russian, offered us a glass of juice for free. Like many Syrians, he thanked Russia for its position. But when I tried to interview, I answered: “No. I can not. I could say a lot. But nearby is the city of Yabrud, where gangsters are rampant. At best, they will come and break all the windows. ” However, despite his caution, the owner of the cafe still angered the bandits with something, and those were not limited to smashing windows. When we drove there in May of this year - from a cozy roadside cafe there was only a pile of miserable ruins - the villains blew up the institution.

And in such an environment, a group of daredevils led a page on Facebook that told the truth about what the “revolutionaries” were doing in the city of Yabrud. The terrorists promised a million Syrian pounds to someone who would give information about the administrators of a disagreeable page. Apparently, there were those who sold the guys. 24-year-old girl shot. On the same day, a reprisal against her colleague, a young man, took place. He was taken to the courtyard and shot in the arms and legs. All members of his family were brutally beaten right in front of their neighbors.

... It seems that there is no influential human rights advocacy force in the world that would be able to oppose these murderers. The United States has repeatedly defended bloggers in Cuba, in China, and in other objectionable countries that were allegedly pursued by the authorities. But for Syrian bloggers killed by terrorists just for exposing their crimes, these “human rights activists” will not put in the words. On the contrary, as in the theater of the absurd - the more vicious and bloody crimes are committed by gangsters- “oppositionists” - the more voices are heard about the need to arm them. Allegedly, increased supply weapons “Opposition” will contribute to “establishing peace” - this is what the so-called “friends of Syria” have agreed upon.

In the province of Homs in the village of Az-Zafarani, a local resident, Muhammad Alwan, hid a girl abducted by terrorists and who managed to escape from captivity. The bandits demanded that he extradite her. The owner turned out to be a man of honor and dared to say “no” to scumbags, “oppositionists”. The terrorists shot the man. But they tried to blame his murder on the Syrian army, and from the minarets there came a call to pray for "the shahid Muhammad Alwan, who was killed by soldiers in the battles for the city of Rastan."

I already had to talk about the murder of 15-year-old teenager Muhammad Kataa in the city of Aleppo. He sold coffee on the street and refused to sell it in debt "for the sake of the Prophet Muhammad," for which he was accused of "blasphemy" and "atheism" and shot in front of his mother. That incident provoked an angry reaction from the Russian Foreign Ministry, which stated: “Such provocative blasphemous acts only lead to aggravation of the already difficult situation in Syria and throughout the region in the sphere of confessional relations.”

Now in Aleppo another young man is killed - his age mate. He was one-eyed and was forced to beg in the street, because of the actions of terrorists in his area he could not receive benefits, which are paid to people with disabilities. The militants, religious fanatics, thought that he looked like the one-eyed Abu Jandal, a negative hero of the Islamic religion. This was the reason for the murder.

Another teenager was killed in the city of Deir ez-Zor. Tnaa Suleiman, 15, was held hostage by the bandits and was shot in retaliation for a mercenary killed by an army from Saudi Arabia.

In the same Deir ez-Zor 19, June armed gunmen set fire to the Orthodox Church. The building was badly damaged, the entire interior of the temple, along with valuable relics, was destroyed by fire. And in the village of Hatla, in the province of Deir ez-Zor, a Shiite mosque was blown up by “oppositionists”. For a greater effect on inciting sectarian strife, gunmen burned Shiite literature.

A Christian priest, 59-year-old Murad Francois was killed by militants in the province of Idleb near the town of Jisr Ash-Shugur. The terrorist group flew into the Franciscan monastery in order to plunder. After the murder of a religious leader, they carried out everything valuable, and all that they could not bear was defiled and destroyed.

Truly, for these "oppositionists" supported by the West, there is nothing sacred!

On the highway between Palmyra and Deir ez-Zor, an assault on a convoy carrying humanitarian aid occurred. Two trucks and an ambulance were traveling to Deir ez-Zor in order to bring food and medicine to the needy, to provide medical assistance to people. The terrorists attacked the vehicles, arrogated to themselves all the boxes with humanitarian aid, wounded and brutally beat the convoy of medical personnel and humanitarian workers accompanying the convoy, destroyed the vehicles. The defense never reached the defenseless civilians in need of food ...

In southern Syria, in the province of Quneitra, bandits kidnapped an ambulance officer in the village of Khan-Arnab Rafik Abbas. He was taken away in an unknown direction.

In the city of Damascus in the Mezze district, law enforcement agencies managed to prevent a terrorist act. 25 June police detained a car in which there were 200 kilograms of explosives.

The terror of the "opposition" against peaceful, defenseless people continues. Comprehensive assistance to terrorists from the West, Qatar, Turkey, Saudi Arabia also continues, and it is carried out under the sugary slogans of "freedom" and "democracy" ...