After meeting "friends of Syria" - bloody Sunday in Damascus 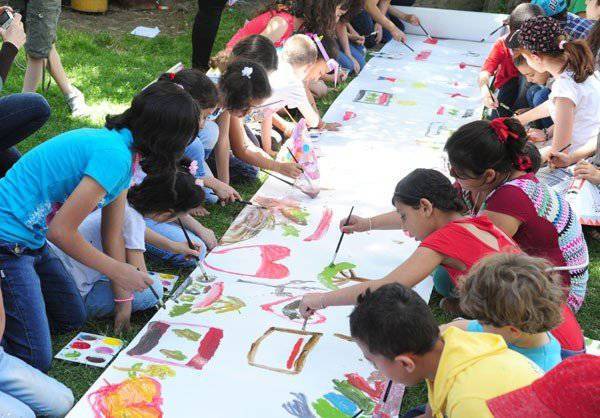 “The solar circle, the sky around is a drawing of a boy” ... In the early years of childhood, we sang this song in a simple Soviet school, on pioneer lines. And on the political information in the classroom they talked about the barbaric acts of the NATO black bloc led by the United States. Did we then understand everything we heard to the end? Perhaps not, and the war was far from us, and we did not hear the shells exploding. And the Syrian children - hear. Some of them die under them, some lose their father and mother. More recently, two years ago, Syria was one of the safest countries in the world, where a traveler could put up his tent in any forest or desert and spend the night quietly. Yes, with the same Bashar al-Assad, who is now trying to blame everything that happens. And who is trying to blame? Those that themselves systematically incited this senseless war.

And the Syrian children want to live and see the solar circle above their heads. In the ancient citadel of Damascus an event called "My Homeland - my love." On it were presented children's drawings. The children drew the sun, sky, trees, Syrian flags ... and a simple peaceful life. The fact that many of them took overseas directors and directors of the war.

... "You see, soldier, you hear, soldier, - people are afraid of explosions." Sunday June 23 painted the capital with blood. The terrorists, supported by the US, NATO and their puppets in the Middle East, as if broke the chain. Early in the morning, three suicide bombers committed a terrorist attack in the Rukn-ed-Din area near the police station and bakery. Five people died, nine injured. Among the victims of crime are law enforcement officers and civilians.

Another terrorist attack was prevented. In the Damascus area of ​​Bab Al-Musalla, three suicide bombers also attempted to enter the criminal investigation building. Fortunately, the gangsters were destroyed on time, their suicide belts were neutralized.

But the criminals did not calm down on this. On the same day, in the densely populated residential area of ​​Mezze-86, which has repeatedly become the object of terrorist attacks, tragedy occurred again. A car bomb exploded. A three-year-old child and two more citizens died, more than 10 suffered. It should be noted that in this metropolitan area live simple workers, who, basically, support the legitimate government. 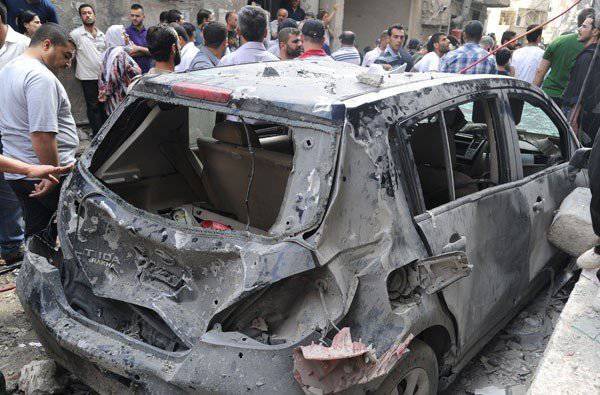 At the other end of Damascus - near the Abbassiin Square and the stadium of the same name - the gangsters fired mortar shells. One citizen died, 7 citizens wounded.

In one day, five terrorist attacks at once. What caused such activity of criminals? And the day before, 22 of June, when Russia celebrated the 72 anniversary of the attack of Hitlerism on the USSR, the faithful heirs of the fascists gathered in the Qatari capital Doha. The meeting, more precisely, a gathering, bore the hypocritical name "Friends of Syria" ...

The United States stubbornly denies this fact and covers up its desire to arm the terrorists - no matter “good” or “bad” - with a desire for peace and democracy. Attacking the USSR, Hitler also "wanted peace" and, of course, fought "for freedom."

And in the best traditions of his fascist teacher, John Kerry knocks from a sick head to a healthy one, reproaching Russia for “intensifying military operations in Syria”.

During the press conference given to them after the meeting of the “Friends of Syria”, Kerry said that, they say, “there is a big difference between those for whom the Syrian opposition is fighting and for whom - Assad. Assad is against the majority of the people of the Syrian state, and the opposition is fighting for the people of Syria. ” He further threatened that he would “work very closely on this with Russia,” without specifying how. Maybe composing regular “Magnitsky lists” or giving money to a crowd of “human rights activists”?

So, two interrelated theses of Kerry: allegedly, the "opposition" protects the people, and Assad opposes the majority of the people.

Let's start with the second statement. In 2014, the presidential election will be held in Syria, which can show the real mood of the people. There is simply no other way, and all other speculation is nothing more than speculation on the concept of "people." The legitimate president of Syria, Bashar Al-Asad, repeatedly and without fear spoke of the presidential election. The United States is afraid of these elections and, together with its satellites and hired terrorists, are trying in every possible way to derail them, thereby depriving the Syrian people of the right to show the will of the majority. Consequently, they understand that no people will support “opposition” candidates - otherwise they would rely on elections.

As for the statement that the “opposition” allegedly protects the people — we see by what methods it does it. Parents of a three-year-old child who died in a car bomb explosion in Mezze-86, or an 12-year-old teenager who died in Jaraman on the same day during a mortar attack on residential areas by terrorists, can say a big thank you for protecting the people ... And not only the "opposition" itself. But, above all - to the very "friends of Syria", after the meeting of which the inspired terrorists staged a "bloody Sunday" in Damascus.

And - a question for Mr. Kerry and the rest of the "friends": those who committed the five terrorist attacks in one day - are they "good" or "bad" terrorists?
In other countries of the world, the spiritual brothers of the Syrian "opposition" are committing no less bloody crimes, covering them up with the "struggle against the infidels." In Lebanon, 6 soldiers killed, the country is desperately trying to get involved in the war.

In Pakistan, a chilling crime was committed. The armed group, known for its struggle with the Shiites, this time elected the victims of simple tourists, climbers. An Islamist group has withdrawn from the hotel 10 innocent citizens of Ukraine, China, Slovakia and other countries. All of them were shot in cold blood. A representative of the Jundullah group, who claimed responsibility for the massacre, said: "These foreigners are our enemies, and we are proud to take responsibility for their murder, we will continue such attacks in the future."

Exactly the same statements are made and the Syrian terrorists. The rhetoric and handwriting are very similar. US statements about “good” and “bad” terrorists and helping them, as well as gathering friends of terrorists, inevitably encourage villains to commit crimes. And not only in Syria.

Ctrl Enter
Noticed oshЫbku Highlight text and press. Ctrl + Enter
We are
Syria: Americans scare themselves, and Asma Asad buys chairsSyria: the rebels do not give up because they do not want to die
Military Reviewin Yandex News
Military Reviewin Google News
39 comments
Information
Dear reader, to leave comments on the publication, you must to register.