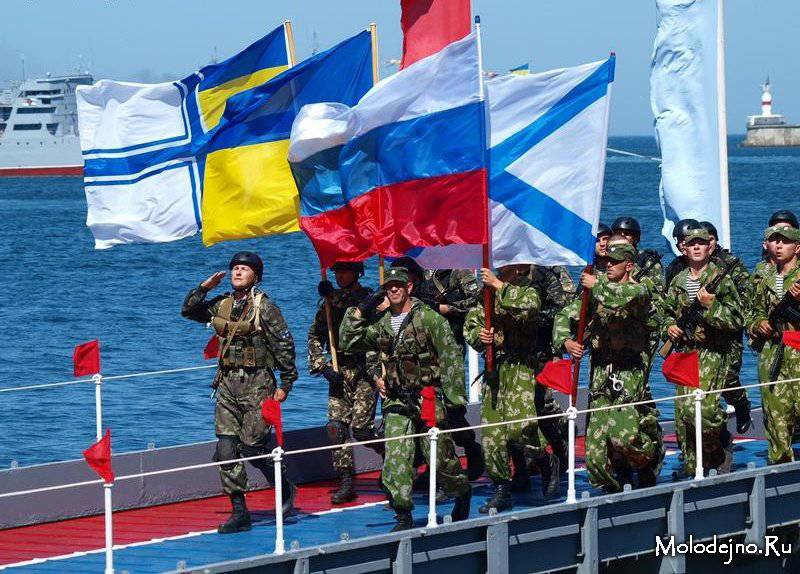 In Sevastopol, the exercises of the Naval Forces of the Armed Forces of Ukraine and the Black Sea began fleet Russian Federation “Fairway of the World 2013”, the theme of which is “Conducting joint anti-piracy actions at sea”. The opening ceremony was attended by the Commander of the Navy of the Armed Forces of Ukraine, Vice Admiral Yuri Ilyin, Assistant Minister of Defense of Ukraine Viktor Maksimov, the Head of the Sevastopol City State Administration Vladimir Yatsuba, the head of the exercises - the Commander of the Black Sea Fleet of Russia, Vice Admiral Alexander Vitko, the First Deputy Commander Naval Forces of the Armed Forces of Ukraine - First Deputy Head of Exercise Vice Admiral Sergey Eliseev, Dean of the Sevastopol District Sergey Khalyuta, private owners exercise. At the beginning of the ceremony, a minute of silence was declared in honor of the memory of those killed in the Great Patriotic War.

The commander of the Ukrainian Navy, Vice Admiral Yuri Ilyin, in his welcoming speech at the rally, noted that these exercises were preceded by serious preparation.

- It is pleasant to note that after a long break we have been actively working together for the preparation and conduct of the exercises for the third year in a row. Over the years, we have managed to achieve a qualitatively new level of interaction between our fleets, ”said the head of the Armed Forces of Ukraine.

The commander expressed confidence that the personnel, participants of the exercises will demonstrate the coherence of mutual actions. He wished all the participants of the events a successful exercise and the achievement of new results on the way to increase their professional level.

The training objectives of the exercises are the development of common views on the forms and methods of anti-piracy, the development of joint actions by crews of ships (vessels) and aviation two fleets in naval combat exercises, on the organization of all types of defense on the go with combat exercises, tactical maneuvering, as well as testing the actions of aviation forces in carrying out anti-piracy tasks and joint search and rescue forces.

June 25 is scheduled for episodes of the marine phase of the exercise. In particular, in the sea, the forces of the two fleets will conduct exercises to control the safety of navigation and survey a suspicious vessel, perform artillery firing, depth bombing, shooting a floating mine, conduct exercises to combat survivability and assist the damaged ship. In addition, anti-piracy actions will be carried out, assistance to the emergency vessel (fire extinguishing), search and rescue of personnel floating on the water, etc.