Arlington in Russian. The long-term construction of the first national military necropolis is over. 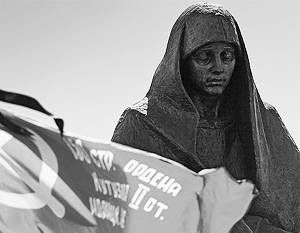 After years of delays in the Mytishchi district near Moscow on Memorial Day and Grief opened a memorial military cemetery. This is Russia's first national pantheon, which will rest as those who showed courage in the war, as well as prominent figures who have served Russia with dignity in civilian life. The memorial is often compared to the American Arlington Cemetery.


The opening ceremony of the Federal Military Cemetery took place on Saturday morning.

It was created by analogy with the Arlington National Cemetery in a suburb of Washington in the United States. The center of monumental and sculptural decoration of the FVMK was the ensemble of sculptures on the Alley of Heroes - 24 figures of soldiers with their inherent historical costumes weapons and attributes of six epochs: from the time of Alexander Nevsky and Dmitry Donskoy to the Great Patriotic War and the era of local wars of the second half of the 20th century.

The Pantheon-Columbarium, which is part of the memorial complex, is a composition in the center of which is a monument called “Sorrow”. The Monument to the Unknown Soldier consists of a figure of a mother holding a dead son in her arms. In front of him is a small black obelisk.

The ceremony was opened by Defense Minister Sergei Shoigu. He laid wreaths, passed the guard of honor, and then Shoigu lit the torch of the Eternal Flame. After this, a minute of silence was announced.

The day before, the first burial took place here. 10 June, near Smolensk, the remains of an unknown soldier were found. It was found that this is a private soldier who died in the 1941 year. He was probably called from the Altai Territory. This Red Army man found eternal peace under the stone.
The cemetery, as noted by Sergei Shoigu, should be a place where the memory of the outstanding Russians will be preserved. “The uniqueness of the Federal Military Cemetery being opened today is not so much on its scale as in that it is intended to become a place where the memory of the outstanding citizens of our country who have special services to the Fatherland will be preserved,” RIA reports.News».

The minister noted that many professionals took part in designing the memorial complex. “Their work was aimed at implementing one noble idea: to create a memorial that would serve as a symbol of the national pride of all the peoples of Russia,” said Shoigu.

The necropolis covers an area of ​​53 hectares (this is seven times the size of the Novodevichy cemetery) and is designed for 30 thousand sites for burial. The cemetery is intended for the heroes of Russia and the Soviet Union, the presidents of Russia and the USSR, prime ministers, ministers, marshals, army generals, citizens awarded the order of the holy Apostle Andrew the First-Called. In addition, employees of federal executive bodies, the State Fire Service, who died while protecting the interests of the state, can be buried here. Places in this cemetery can be allocated for other citizens, for the burial of which the president or the government will give permission.

The full circle of persons to be buried at the Federal War Memorial Cemetery is determined by government resolution of February 25 of the year 2005.
The idea of ​​creating a national pantheon appeared long ago. Back in 90, a group of veterans - generals and marshals of the USSR - repeatedly wrote to President Boris Yeltsin, proposing to create such a cemetery. With the first appeal, they were never heard, after the second power, Moscow and the region declared that there was simply no free land for the necropolis.

A few years later, the land was found: more than 50 hectares north of the village Sgonniki - part of the military range in Mytishchi. In 2000, a foundation stone was installed there. And in 2001, President Vladimir Putin signed a decree “On the Federal War Memorial Cemetery”, created to “commemorate the soldiers and other citizens of the Russian Federation who died while defending the Fatherland”, as well as people who “had special merits to the state”.

At the competition, won the project of the State Unitary Enterprise MNIIP "Mosproekt-4", invited as co-authors of famous artists of Russia: George Frangulyan and Ivan Lubennikov. Subsequently, between the sculptors and designers began conflicts on copyright. The case ended in court, and only by 2008, did the artistic battles subside.

Ctrl Enter
Noticed oshЫbku Highlight text and press. Ctrl + Enter
We are
June 22 - Day of memory and grief. 75-th anniversary of the beginning of World War IIThe Federal War Memorial Cemetery will be opened on the Day of Memory and Grief in the Moscow Region
Military Reviewin Yandex News
Military Reviewin Google News
16 comments
Information
Dear reader, to leave comments on the publication, you must to register.