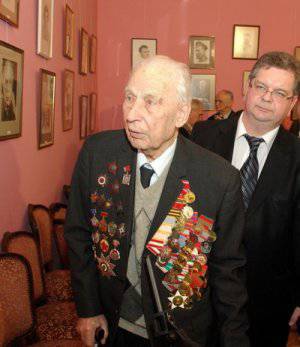 20 June marked the 100 anniversary of the birth of Pavel Georgievich Gromushkin - portrait painter, honored cultural worker. Gromushkin is famous not only for his works of art - for many years many Soviet intelligence officers worked abroad in our homeland according to the legends and documents that he prepared for them.


ALMOST 70 YEARS Pavel Georgievich served in foreign intelligence, and his way to this service was unusual. At first glance, the biography is very ordinary, like many of his generation: he was born in 1913 year in a peasant family in the village of Molodi near Moscow. Paul's father was an icon painter. At the end of the 20 of the last century, the family moved to Moscow, to Maryina Roshcha. Like all children of that time, Pavel was in the pioneer detachment - at the printing house of Rabochaya Gazeta.

From the memories of P.G. Gromushkina: “Even then I was always drawing something, making out, my notebooks with drawings were always at exhibitions. And once the director of this printing house saw my work. They liked him very much, and he invited me as a pupil of a chromolithograph to Rabochaya Gazeta. I was then 14 years old, and since I always dreamed of becoming a real artist, I naturally agreed. ” 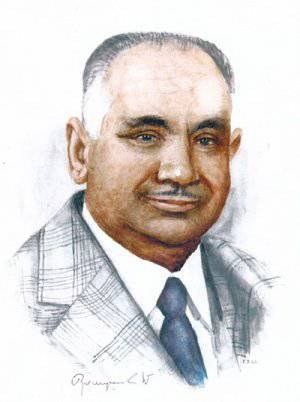 Work in the printing house was interesting. At 1920 – 1930, the heyday of Soviet caricature and genre drawing fell. The workshop where Pavel worked was preparing materials for the print magazines Crocodile, Ogonyok, Murzilka. He often met with the famous Kukryniki, Efimov, Rogov and other famous artists. He himself tried to prove himself, so far, however, only in the wall newspaper. She wants to paint according to science, so she regularly visits the circle of fine arts in the House of Culture, where Kukryniksy taught, goes to exhibitions, looks at the works of professionals. At the same time, he entered the Polygraphic Institute for the correspondence department of the art-graphic faculty. In the service of the printing house, things are going well, too, Pavel Georgievich has reached the head of the workshop.

From the memories of P.G. Gromushkina: Everything was clear to me there, I knew the whole production to the smallest detail. The timely output of magazines and, most importantly, the quality of printed products depended on our work. It was a well-adjusted and well-understood world to me. For myself, I called him "my truth."
Gromushkin worked in the Pravda printing house for about ten years. It seemed his future was predetermined, but in the second half of the 1930-s, fate was making a sharp turn — Gromushkin was suddenly called to the Lubyanka.

He was offered a job in foreign intelligence, a good salary and career prospects. Before starting work, Pavel Georgievich, like all recruits, appeared before Beria. He later recalled that Beria was interested in his place of residence: “Where do you live? - "In Marina Grove." - “A sign with counterfeiters? - followed by an unexpected question. “No,” Gromushkin replied. “Bad!” Beria snapped. Why the lack of acquaintances among counterfeiters negatively characterizes a person, Gromushkin did not understand. But they still took him to work. In 1938, Pavel Georgievich was enlisted as a staff member of Soviet foreign intelligence.

From the memories of P.G. Gromushkina: In 1938, I was enlisted as a full-time employee of the NKVD-INO foreign intelligence unit. Found myself like on another planet or in another dimension. The impression was also strengthened by the fact that there was complete uncertainty: why did I actually need it? What specific case will I do? But gradually, this unknown and exciting world opened up before me. That was the world of intelligence. Intelligence was and remains an integral part of the state apparatus; she is able to solve serious problems to ensure the security of the country. The power is useful and indispensable ... " 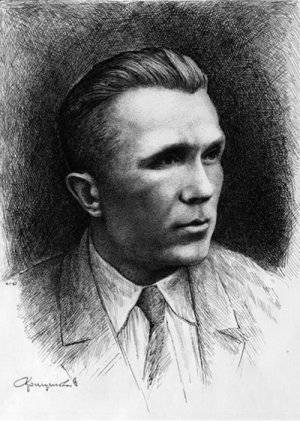 CALLIGRAPHIC talent and draftsman's skills led Paul to the department, which was engaged in the production of documents for the work of our intelligence officers abroad. This special unit was created at the initiative of Naum Eitingon, and at that time he was headed by an Austrian - communist Georg Miller, a surprisingly intelligent, extensively knowledgeable man and a professional intelligence officer. Paul had to learn quickly. Soon Gromushkina began to trust independently to perform tasks. First, simple, and then more complex. At that time, William Fisher, who entered the history intelligence under the name of Rudolf Abel. Like Gromushkin, he was fond of painting and painted all his life. William and Paul became friends. Subsequently, Pavel Georgievich will create several portraits of Abel. All of them are imbued with deep respect for the legendary scout.

In 1941, Gromushkin was sent to the first business trip to Bulgaria for a special assignment. One of the most complex operations in which Gromushkin took part was connected with the military bloc of the Berlin-Rome-Tokyo axis countries. It was in Bulgaria that the most valuable source of information was located, through which Soviet intelligence obtained information about the plans and concrete steps of this block.

The peculiarity of working with him was that the source trusted only one person - Vasily Ivanovich Pudin. All related activities were entrusted with providing a group of intelligence officers, including Gromushkin. The information received was necessary for our command to make important strategic decisions. The operation was successful.

In April, 1942, after returning from Bulgaria, Pavel Georgievich is involved in the work of organizing and coordinating the partisan movement. The spontaneous actions of the local population against the invaders had to be quickly transferred to the rails of a systematic armed struggle, and the fighters were trained, provided with communications, weapons and well-trained commanders. This problem was solved by Pavel Georgievich and his colleagues. 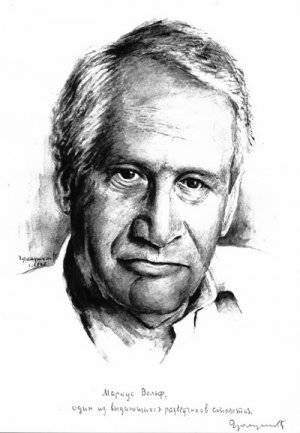 DURING the war, his main work was the production of German documents for the needs of the partisans. Gromushkin recalled that it was not too difficult to fake the “Ausvays”, although he had to “sweat” over some papers. So, he prepared documents addressed to Paul Siebert for the legendary Nikolai Kuznetsov. In the case of Kuznetsov, a long and painstaking work was carried out. We were looking for such a “legend” for him that it was impossible to doubt her.

During the battle of Moscow, our German regimental documents were captured. There was a case of a certain Paul Siebert. He fit perfectly - there were no relatives, no one could accidentally find out. Gromushkin used Zibert’s real military card, pasted a picture of our Kuznetsov there. Then he made Kuznetsov a shoferskoy and award certificates.

“It was easy to make German documents,” said Pavel Georgievich. - True, the paper for their documents was used very good, but we had it. The difference between German documents and ours was that they are very pedantic. Everything is recorded in the military ID card - from the issue of the footcloths to the rewarding. And in each column there is a stamp with a date, and where there should be a painting, a stamp indicating the title. In order not to pierce, we studied all the trophy documents. For example, the military tickets of the soldiers of the ground forces had a brown cover, the SS troops had a gray one, with an SS badge. And the form was different: for example, the edging of the epaulettes in the infantry was white, in the sappers — black, in the gunners — red, in the signalers, poisonous-lemon. ”

In many ways, thanks to the "iron" documents Kuznetsov managed to work successfully, extracting invaluable information. It was he who learned about the location of the rate of Hitler near Vinnitsa, the first to report the impending assassination attempt on Stalin, Roosevelt and Churchill in Tehran. The documents of Nikolai Kuznetsov were checked more than 100 times, and the papers never worked by Gromushkin did not arouse suspicions among the Germans. Later, Gromushkin wrote a portrait of his friend Nikolai Kuznetsov.

After the war, Pavel Georgievich traveled to almost the whole world to perform various kinds of tasks, but the time had not yet come to talk about this period of his life.

IN 1979 YEAR, Colonel Gromushkin resigned. But, as you know, there are no former intelligence officers, and even after retirement he worked: he advised, wrote tutorials, met with young foreign intelligence officers, betraying them his many years of invaluable experience. Thus, we can assume that, in total, Pavel Georgievich was in the ranks of almost 70 years, until the last day of his life.

His contribution to the cause of ensuring the security of the Motherland was marked by many orders and medals, including the Order of the Red Banner, three orders of the Red Star, the Order of the Patriotic War of the II degree, two orders "Badge of Honor". For his professional services, Pavel Georgievich was awarded the sign "Honorary Officer of State Security", an award especially esteemed by intelligence officers.

Despite his work in intelligence, Pavel Georgievich did not stop drawing.

From the memories of P.G. Gromushkina: “When time fell out, he willingly took a pencil or brush, tried not to lose his gift. Independently comprehend the secrets of the portrait painter. He studied how to express individuality, the nature of his chosen nature, how to penetrate the secret of a secret person. Little by little my creative inclinations were determined, the arsenal of methods and means of work was accumulating. ”

At first, these were portraits of his own people: wives, daughters, grandchildren. The artist has beautiful landscapes and portraits of famous people. Yuri Gagarin, Yuri Nikulin, Leo Tolstoy, Alexander Pushkin, Che Guevara - the heroes of his artistic canvases. Portraits of prominent people visited the International Space Station and returned to Earth with the ISS onboard seal.

And then Pavel Georgievich decided to leave the memory of those people with whom he was associated friendship and work in intelligence. 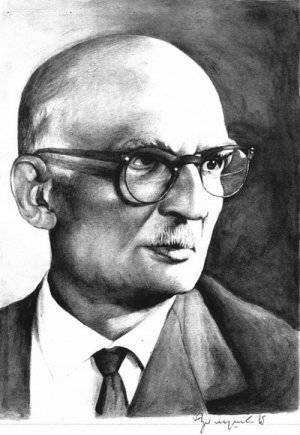 From the memories of P.G. Gromushkina: “I wanted to perpetuate in portraits those people who gave intelligence to themselves, their youth and their lives. Believe me, they were worthy of it even in life. The years allotted to each of us pass, the life forces end, but the memory tenaciously keeps what has left a deep imprint - and not only in personal life, but also in the history of power. ”

In 1987, Gromushkin was awarded the title of Honored Worker of Culture of the RSFSR for a series of portraits of intelligence officers.

Pavel Georgievich, having retired, was engaged in active social work. I met with students of various Moscow schools. His stories about intelligence and intelligence officers are remembered to this day. Thus, in 2007, at the State Institution “Social Rehabilitation Center for Minors“ Krasnoselsky ”, he helped students organize a permanent exhibition on the history of the Foreign Intelligence Service of Russia.

Exhibitions of artworks by Pavel Georgievich were also held with unchanged success. In February, 2008, in the Central House of Journalists on Nikitsky Boulevard, was organized his exhibition “Portraits, People, Fate”. The author timed the exposure to the 95 anniversary and the 70 anniversary of work in exploration. He was full of creative plans.

But, unfortunately, this exhibition was the last in the life of the artist. His heart stopped 16 May 2008, one month before the anniversary date.
... For five years now, Pavel Georgievich has not been with us, but for his comrades-in-arms and those who knew him, he will forever be remembered as a wonderful person, loyal and reliable comrade, a wonderful artist and the highest scout professional.

In the picture: P.G. Gromushkin at an exhibition at the Central House of Journalists, February 23 2008.

Ctrl Enter
Noticed oshЫbku Highlight text and press. Ctrl + Enter
We are
Father toldToday 79 would be the first man who flew into space - Yuri Alekseevich Gagarin
3 comments
Information
Dear reader, to leave comments on the publication, you must to register.