They fought for their country 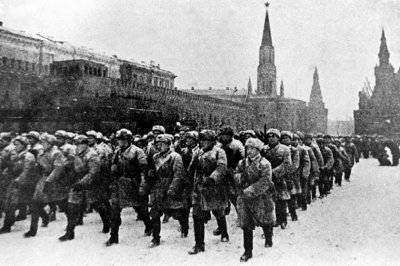 Fascist perceptions of the people of Soviet Russia, on whose territory they invaded 22 on June 1941, were determined by the ideology that portrayed the Slavs as "subhuman." However, the very first battles forced the invaders to change a lot in these views. We cite documentary evidence of soldiers, officers and generals of the German Wehrmacht about how Soviet soldiers appeared to them from the first days of the war, who did not want to retreat or surrender ...


"My commander was twice as old as me, and he had to fight the Russians near Narva in 1917 the year he was a lieutenant." Here, in these endless spaces, we will find our death like Napoleon, "he did not hide he is pessimistic ... - Mende, remember this hour, it marks the end of the former Germany "" (Erich Mende lieutenant of the 8 th Silesian Infantry Division about the conversation held in the last peaceful moments of 22 June 1941 of the year).

“When we entered the first battle with the Russians, they clearly did not expect us, but they could not be called unprepared. There was no enthusiasm for [us]! Rather, the sense of the grandeur of the upcoming campaign seized everyone. And then the question arose: where, at which locality this campaign will end? ” (Alfred Durvanger, Lieutenant, Commander of an anti-tank company of the 28 Infantry Division, advancing from East Prussia through Suwalki)

"On the very first day, as soon as we went on the attack, one of ours shot himself from his weapons. Holding a rifle between his knees, he inserted the barrel into his mouth and pressed the trigger. So for him the war ended and all the horrors associated with it " (anti-tank gunner Johann Danzer, Brest, 22 June 1941 of the year).

“The behavior of the Russians, even in the first battle, was strikingly different from the behavior of the Poles and allies who were defeated on the Western Front. Even when they were in the ring of encirclement, the Russians stood up firmly (General Günther Blumentritt, Chief of Staff of the 4 Army).

“The battle for mastering the fortress is fierce - numerous losses ... Where the Russians were able to be knocked out or smoked, new forces soon appeared. They crawled out of basements, houses, sewer pipes and other temporary shelters, aimed fire, and our casualties grew steadily ”” (from the combat reports of the Wehrmacht 45 Infantry Division, which was entrusted to seize the Brest Fortress; the squad against the 17-thousandth garrison of the fortress taken by surprise; the division lost almost as many soldiers and officers as for all 8 weeks of the campaign in France during the first day of the fighting in Russia). “For us, these meters turned into a solid fierce battle, which did not subside from the first day. Everything around had already been destroyed almost to the ground, there was no stone left on the buildings ... The assault team of sappers climbed onto the roof of the building just opposite us. They had explosive charges on long poles, they popped them into the windows of the upper floor — they suppressed the enemy’s machine-gun nests. But almost to no avail - the Russians did not give up. Most of them lodged in strong basements, and the fire of our artillery did not harm them. You look, an explosion, another one, everything is quiet for a minute, and then they open fire again. ” (Schneiderbauer, lieutenant, platoon commander 50-mm anti-tank guns 45-th Infantry Division of the battles on the South Island of Brest Fortress).

“You can almost say with certainty that not a single cultural inhabitant of the West will ever understand the character and soul of the Russians. Knowledge of the Russian character can serve as a key to understanding the fighting qualities of a Russian soldier, his advantages and methods of his struggle on the battlefield. Resilience and peace of mind of a fighter have always been paramount factors in a war and often in their significance turned out to be more important than the number and armament of troops ... You can never say in advance what a Russian will do: as a rule, he rushes from one extreme to another. His nature is just as unusual and complex as this huge and incomprehensible country itself ... Sometimes the infantry battalions of the Russians were confused after the very first shots, and the next day the same units fought with fanatical resilience ... Russian in general is certainly excellent a soldier and with skilful leadership is a dangerous adversary " (Mellenthin Friedrich von Wilhelm, Major General tank troops, chief of staff of the 48th tank corps, later chief of staff of the 4th tank army).

“On the Eastern Front I met people who can be called a special race. Already the first attack turned into a battle for life and death " (Hans Becker, tank crew of the 12 Panzer Division).

“During the attack, we stumbled upon a light Russian tank T-26, we immediately clicked it directly from the 37-graph paper. When we began to approach, a Russian leaned out from the hatch of the tower to the waist and opened fire on us with a pistol. It soon became clear that he was legless, they were torn off when the tank was hit. And despite that, he fired at us with a pistol! ” (from the memoirs of an anti-tank gunner of the first hours of the war).

“The quality of Soviet pilots is much higher than expected ... Violent resistance, its mass character does not correspond to our initial assumptions” (Hoffman von Waldau, Major General, Chief of Staff of the Luftwaffe Command, entry in a diary from 31 June 1941 of the year).

“We almost did not take prisoners, because the Russians always fought to the last soldier. They did not give up. Their hardening does not compare with ours ... " (from an interview with the war correspondent Kurzio Malaparte (Zukkertu) of an officer of the tank division of Army Group Center).

“... Inside the tank lay the bodies of a brave crew, who had only been injured before. Deeply shocked by this heroism, we buried them with all military honors. They fought to the last breath, but it was only one small drama of the great war. After the only heavy tank blocked the road for 2 days, it began to act ... ” (Erhard Raus, colonel, commander of the Raus campus on the KV-1 tank, who shot and crushed a convoy of trucks and tanks and the German artillery battery; in total, the crew of the tank (4 of the Soviet soldier) restrained the advance of the Raus battle group (approximately half-artillery division) two days, 24 and 25 June).

"July 17 1941 of the year. Sokolnici, near Krichev. In the evening, the unknown Russian soldier was buried [this is a 19-year-old senior sergeant-gunner Nikolai SIROTININA. - N.M.]. He alone stood at the cannon, long shot down a column of tanks and infantry, and died. Everyone was surprised at his courage ... Oberst before the grave said that if all the soldiers of the Fuhrer fought like this Russian, we would have conquered the whole world. Three times they fired volleys from rifles. Is he still Russian, is such a reverence necessary? ” (from the diary of ober-lieutenant of the 4 Panzer Division of Henfeld)

“The losses are terrible, do not compare with those that were in France ... Today is our road, tomorrow Russians take it, then again we and so on ... No one has yet seen any meaner than these Russians. Real chain dogs! You never know what to expect from them. And where do tanks and everything else come from them ?! ” (from the diary of a soldier of the Army Group Center, 20 August 1941; after such an experience in the German troops, the saying “Better than three French campaigns than one Russian” came into use).

“You just won't believe in this until you see it with your own eyes. The soldiers of the Red Army, even burning alive, continued to fire from the blazing houses ” (from the letter of the infantry officer of the 7 Tank Division about the battles in the village near the Lama River, mid-November of the 1941 year)
“Russians have always been famous for their contempt for death; the communist regime has further developed this quality, and now massive Russian attacks are more effective than ever before. Twice attempted attack will be repeated for the third and fourth time, despite the losses suffered, and the third and fourth attacks will be carried out with the same stubbornness and composure ... They did not retreat, but rushed forward uncontrollably. The reflection of this kind of attack depends not so much on the availability of technology, but on whether the nerves survive. Only battle-hardened soldiers were able to overcome the fear that encompassed everyone. ” (Mellenthin Friedrich von Wilhelm, Major General of the Tank Forces, Chief of Staff of the 48 Tank Corps, later Chief of Staff of the 4 Tank Army, member of the Battle of Stalingrad and Kursk).

“My God, what did these Russians intend to do with us? It would be nice if up there at least listened to us, otherwise we all have to die here. ” (Fritz Siegel, corporal, from a letter home from 6 December 1941 of the year).

From the diary of a German soldier:

“October 1. Our assault battalion went to the Volga. More precisely, to the Volga still meters 500. Tomorrow we will be on the other side and the war is over.

3 October. Very strong fire resistance, we can not overcome these 500 meters. We stand on the border of a grain elevator.

6 October. Damn grain elevator. It is impossible to approach him. Our losses exceeded 30%.

10 October. Where do these Russians come from? The elevator is no longer there, but every time we approach it, there is a fire coming out of the ground.

15 October. Hooray, we overcame the elevator. From our battalion left 100 people. It turned out that the elevator defended 18 Russians, we found 18 corpses. ” (the battalion of nazis who stormed these 2 heroes of the week numbered about 800 people).

“Bravery is a courage inspired by spirituality. The stubbornness with which the Bolsheviks defended themselves in their pillboxes in Sevastopol is akin to a certain animal instinct, and it would be a profound mistake to consider it the result of Bolshevik beliefs or upbringing. Russians have always been like that and most likely they will always remain so. ” (Joseph Goebbels)

“They fought to the last, even the wounded and they would not let us close. One Russian sergeant, unarmed, with a terrible wound in the shoulder, rushed at ours with an engineer shovel, but he was immediately shot. Madness, the most real madness. They fought like beasts - and died dozens " (Hubert Coral, corporal of the sanitary division of the 17 Panzer Division, about battles along the Minsk-Moscow highway).

From the letter to the mother of the Wehrmacht soldier: “My dear son! Maybe you will still find a piece of paper to make yourself known. Yesterday I received a letter from Yoz. He is fine. He writes: "Before, I terribly wanted to take part in the attack on Moscow, but now I would be happy to get out of all this hell."