"Consistent pacifism has never been inherent in the Christian Church"

22 2013 June
80
The sad day of 22 June 1941 of the year forever changed the fates of millions of our compatriots, most of whom since weapons in their hands they rose up to defend the Motherland from the German fascist invaders. Nowadays, not only the outcome and significance of the Great Patriotic War, but also the key concepts for previous generations - “loyalty to duty” and “love for the Fatherland". Portal Pravoslavie.Ru asked me to share my thoughts about this with the church doctor stories, a teacher of canon law at the Sretensky Theological Seminary Archpriest Vladislav Tsypin. 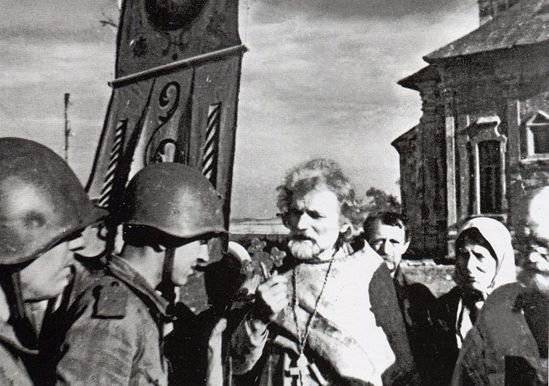 - What does the concept of "Fatherland" mean to you, as an Orthodox priest? Is it a territory, a people or more narrowly - neighbors, a family?

- I think this concept includes the territory, people and neighbors. It seems to be more correct to call the land on which a man grew, limited by state borders, because it is impossible to call the Fatherland, in the context of war with an external enemy, a separate place - city, village, village. Fatherland in the sense of the word we are discussing is still a state in which people of different nationalities can live. It was him who went to protect our fathers and grandfathers. The boundaries of this territory, of course, may change over time, so we consider it in relation to this particular historical time.

- From your family, someone participated in the war?

- Of course. Father, grandfather, uncle and other older relatives. I never saw my grandfather and uncle alive; one of them died at the front, the other went missing, probably also died.

- From your point of view, is patriotism a Christian virtue or some kind of external manifestation of human bias towards the earthly world, which is in no way connected with the salvation of the soul?

It is erroneous to believe that only the last two or three centuries began to speak about the patriotic feeling of Christians. The word “patriotism” was only introduced as a term into Orthodox society in the 18th century, but much earlier our great saints spoke and wrote about the need for love for the Fatherland, who with their own lives set an example of how sacrificially we should treat it. The most striking example is the holy Prince Alexander Nevsky - the personification of the Orthodox patriot. 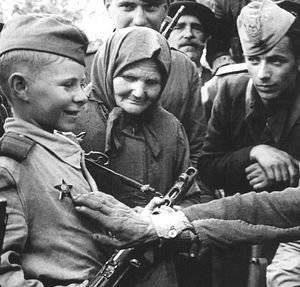 - Among those who defended our Motherland during the Great Patriotic War, there were quite a few Orthodox people, but now you can hear opinions that they thereby helped to preserve the God-fighting anti-church regime. What would you answer to such an accusation?

- This judgment is unfounded, because in our history political realities have changed, and the country, the Fatherland, the state, and the people are concepts that are incomparably more permanent than the political regime. Then he really was unfavorable for the Church, but it was an argument of a secondary order for those Orthodox people who went to the front or worked in the rear compared to the issue of state independence and the prospects for the very existence of the peoples inhabiting our country, first of all the Russian people. .

During the First World War, there was no question of upholding the independence of the Russian Empire, only of the territories, borders and place of the Russian state in the political system of the world, but Orthodox Christians were ready to defend these very earthly values ​​in arms, considering it their sacred, moral duty. .

- Today, sometimes the Russian Orthodox Church is also accused of the fact that during the years of World War II, in addition to the intensified prayer for granting victory, she was engaged in fundraising for the army, for example, to create tank columns, which then went to physically destroy the enemy.

- It is quite in line with the Russian tradition, which is based on the tradition of Rome and Byzantium, where the Church also fully supported the state in the struggle against an external enemy. If we turn to closer examples in time, in particular, to the history of the liberation of the Balkan countries from the Ottoman yoke, the Orthodox Church participated in this in the most direct way. This was the case even in the 20th century. It is known that the national liberation struggle in Cyprus against the English colonial regime was headed by the spiritual leader of the Cyprus Local Church, who personally led the rebels, who later became the first president of the independent Republic of Cyprus. I'm talking about the famous Archbishop Macarius. Similar examples can be found in the history of the Catholic and Protestant churches. Consistent pacifism of the Christian Church has never been inherent.

- In 1943, the Council of Bishops of the Russian Orthodox Church condemned collaborationism and anathematized those who changed the oath, in particular General Vlasov. Opinions are now being expressed that the Council was not competent in this, since the acts of the preceding 1917-1918 Local Council, which were more numerous, included, besides clerics and laymen, bishops, political bans were forbidden. In addition, representatives of the first wave of emigration who participated in the war on the side of the fascists, who sincerely believed that helping the Bolshevik enemies, they are fighting for the liberation of Russia, were referred to the traitors by the Soviet authorities. Among them were many Orthodox Christians. How do you assess this situation?

- Indeed, the 1943 Council adopted a special definition, which read: “The Holy Orthodox Church, both Russian and Eastern, has already issued its condemnation of traitors to the Christian cause and traitors to the Church. And we, today, gathered in the name of the Father, the Son, and the Holy Spirit, reaffirm this condemnation and decide: whoever is guilty of betraying the general church cause and has gone over to the side of fascism, as an opponent of the Cross of the Lord, should be excommunicated, and the bishop or cleric deprived of dignity ” .

The Council of Bishops of 1943 was recognized to be fully legitimate due to the fact that no one in other Local Churches at the level of the highest ecclesiastical authority challenged the lawfulness of electing Metropolitan Sergius (Stragorodsky) as Patriarch, and his elections were held at this Council. In this regard, the question of the legitimacy of the Council is not worth it. Canonically, he had complete power, due to the fact that the participation or non-participation of clerics and laity fundamentally does not affect the canonical authority of the Council. The absence of many bishops in it for a completely good reason is also undoubtedly of no fundamental importance, since in church history it was not the case that absolutely all those who had this right in their archpastoral dignity participated in the councils.

Personally, as far as I know, nobody was anathematized at this Cathedral, including Vlasov. If it were a personal anathema, this question should have been studied in detail beforehand, a church-judicial process should have gone through, which then, of course, did not exist. The conciliar anathema to the traitors was nevertheless an act of a declarative nature, the purpose of which was to remind those who committed treason of the need for repentance, and those who intend to change - the severity and moral consequences of this step. It is known that anathemas in the church history of Russia were also uttered for political reasons, let us recall the excommunication of Hryshka Otrepyev, Stenka Razin, Ivashki Mazepa. I deliberately use their names as they sound in anathema.

The Council of Bishops of 1943 relied on the rules of St. Gregory of Neocessaria, which are part of the canonical heritage of the Christian Church. In 8, of these rules, those who under the pretext of war rape and kill civilians are mentioned. The reason for these canonical restrictions was the behavior of some inhabitants of Neokessarii, who suffered during the invasion ready in Asia Minor. The parallels with the Great Patriotic War are quite appropriate here even in the sense that the state power was then pagan and the Christians were subjected to consistent persecution. According to the rule, Christians who went over to the side of the barbarians were subject to spiritual responsibility. Literally in this church-canonical document it says so: “As many as were attached to the barbarians, and with them, during their captivity, they participated in the attack, having forgotten, supposedly there were Pontians and Christians, and hardened to the point that they killed their own tribal or tree, or by strangling, they also pointed out ways or houses to the leading barbarians: even those who listened to must be barred from entering the ranks of the hearers, until the holy fathers, or even their Holy Spirit, were pleased with them. ” This rule is directly directed against betrayal in wartime.

As for the emigrants, who found it possible for themselves to participate in the war on Hitler’s side, they could subjectively believe that they were continuing the Civil War, after all, the White Civil War was waged in some alliance with the Entente countries. Here, however, the composition of the union has changed. In the circumstances of the Second World War, the relations of the Russian émigrés with Hitler were a little like those of the allies. This, of course, does not make it possible to justify them, but suggests why they could consider their conscience clear and their actions right. To General Vlasov, all this does not apply. In his case, going over to the side of Hitler was purely an act of betrayal and betrayal. He swore allegiance to his country, but being in captivity, he went to cooperate with the enemy.

Treason to the motherland, betrayal of the oath - a fundamentally different phenomenon than the transition to the side of the enemy for ideological reasons. In all Christian states, treason has always been considered a grave crime. In this case we are talking about an indisputable crime, in any case, from the point of view of traditional legal conscience, in which nothing has changed in this sense under the influence of Christian ethics.

Ctrl Enter
Noticed oshЫbku Highlight text and press. Ctrl + Enter
We are
What you didn't want to know about EnglandReligious conflict in Abkhazia? It is possible
Military Reviewin Yandex News
Military Reviewin Google News
80 comments
Information
Dear reader, to leave comments on the publication, you must sign in.