Our response to a “quick global strike”

21 2013 June
50
The lag in high-tech weapons can be compensated for by ultra-low nuclear weapons.


Weekly "MIC" in the number 15 published materials, indicating the need to develop tactical nuclear weapon RV and A low and ultra-low power. We represent the point of view that, in order to solve the tasks of regional deterrence, our country should withdraw from the indefinite Treaty between the USSR and the USA on the elimination of their medium-range and shorter-range missiles.

In 2009, the Federation of American Scientists, which included Nobel Prize winners 68, and the Council for the Protection of Natural Resources prepared a report “From Opposition to Minimum Deterrence. New nuclear policy on the way to the elimination of nuclear weapons "(From Counterforce to Minimal Deterrence. A New Nuclear Policy on the Path Toward Eliminating Nuclear Weapons). In our country, a number of experts interpreted this event as the US preparation for the transition to a new stage of the arms race: having achieved decisive superiority in conventional weapons, technical equipment of the armed forces and information technologies over their main rivals - Russia and China, the Americans suggest that the rest of the countries abandon the strategic nuclear forces (SNF). A further reduction of the nuclear arsenals of the two most powerful nuclear powers, the United States and Russia, was conducted through the Strategic Offensive Reductions Treaties - START-1, START-2, START-3. This reduction is not removed from the agenda. To this day, work continues in this area, both from the United States and from Russia.

At the same time, a provision is made in the US National Security Strategy to significantly replace the SNF with conventional weapons.

Formulation of the problem 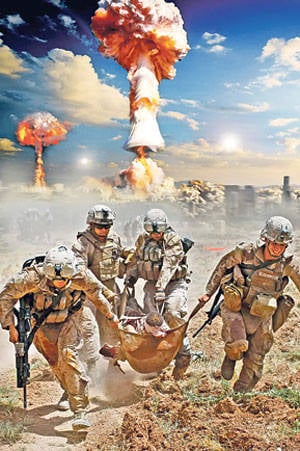 In military science, even in a peaceful political process, a clear concept of “nuclear deterrence at the global level” has developed. As a rule, it is said about SNF primarily of two states - the USA and the Russian Federation.

For the Russian Federation, the preservation and strengthening of strategic nuclear forces at this stage is the only guaranteed way to ensure sovereignty. On the other hand, apparently, with the development of high-precision weapons, information warfare weapons and weapons based on new physical principles (ONFP), the role of nuclear deterrence will decrease. Accordingly, nuclear weapons will no longer be the guarantor of sovereignty. And for this we must prepare.

The US military leadership said that the Americans would not develop high-yield nuclear munitions. In Washington, they believe that spending significant money in this case is inappropriate. Therefore, the United States plans to develop low-precision and ultra-low-power high-precision nuclear munitions. Among other reasons, the indicated class of nuclear warheads requires significantly less time and financial costs than ONFP. As for the latter type of weapon, Russia cannot be kept up with America today. But nuclear warheads of small and ultra-low power should be used in containment at the regional level, since they can be used on the battlefield from conventional carriers without special modifications of the latter and they are more effective compared to traditional high-precision ammunition. It is necessary to take into account the technical condition: the proposed high-precision nuclear warheads must be adapted for air explosions in order to ensure the least environmental harm (this is relevant for a regional conflict).

The collapse of the bipolar system of mutual deterrence made the world less secure. There was a temptation to solve political problems by military methods. The United States arrogated to itself the right of armed intervention almost anywhere in the world, adopting a new form of deterrence, which is based on the concept of “fast global strike” (BSU). In accordance with the latter created the Main shock command of the US Air Force (Air Force Global Strike Command - AFGSC). 450 installations were assigned to it. In the future, they can be used as a means of launching precision tools with conventional ammunition.

The concept of BSU implies delivering a powerful concentrated strike with several thousand high-precision means to the target country within two to four hours, destroying the most important objects of the state and forcing it to surrender. At the same time, the United States insures against retaliation from Russia and China by deploying a strategic missile defense system.

If we take as an axiom that the United States and the Russian Federation will refuse to use megaton nuclear weapons that could destroy Earth civilization, then the only way to ensure Russia's national security is nuclear deterrence at the regional level. This concept has long been developed by Russian military experts, but for a number of reasons, it has not become widespread.

Imagine the following scenario. The United States inflicted BSU on the most important sites of Russia, and from the territory of the Baltic states (Lithuania, Latvia, Estonia) crossed the state border of the Russian Federation the ground forces of the NATO bloc, captured Pskov, and advanced to Moscow. Given the limitations of the scenario in question, Russia can influence offensive troops with tactical nuclear weapons (TNW), including low-precision and ultra-low-power nuclear warheads. Cash TNW and carriers: front-line bombers with nuclear bombs, cruise missiles, air, sea and land-based. In the near future, the Iskander-M missile system will also have low-power nuclear weapons. In addition, it is necessary to restore the nuclear artillery (caliber 152 mm), for which a significant amount of nuclear warheads are still stored, including the development of ultra low power charge.

The experience of armed conflicts involving the United States and its allies in the first decade of the 20th century showed that the armies of highly developed countries often outperform the RF Armed Forces in basic qualitative and quantitative indicators. In these armies there are well-developed information systems for combat command and control of troops and armaments, including modern ACCS. Thus, in the US war against Iraq in 2003, the presence of such systems allowed the US command to preempt the enemy in making decisions, in the combat use of forces and means, in firing strikes on critical objects with conventional means of destruction.

The only way to solve the problem of abandoning the use of strategic nuclear forces (megaton charges) in the conditions of the qualitative superiority of the enemy will be the possibility of the Russian Federation to implement the mentioned concept of nuclear deterrence at the regional level using high-precision low and ultra-low-power nuclear warheads.

So, regional nuclear deterrence is carried out by tactical nuclear weapons and is an integral part of the global one for which the classical triad is intended - the Strategic Missile Forces, the NSNF and YES. This concept is not only a threat to the use of TNW, but also in the event of an armed conflict - the actual use of a limited number of nuclear strikes in the continental theater of operations or strategic directions. The latter allows restraining the aggressor, which has a clear advantage in human resources, a more modern technical base and, as a result, superiority in equipping the troops with modern automated information support and combat control systems with minimal costs and less damage to their troops.

According to the established views, TNW can be used in the form of a deterrent nuclear strike (NPS). The latter is intended to demonstrate the determination of Russia's intentions in preventing aggression or its escalation. SIAU is also possible as part of the ongoing military operation. Forces and means of tactical nuclear weapons can be used both before the start of active actions, and in the course of repelling aggression. Previously, the Armed Forces of the Russian Federation carry out tasks for disinformation of the enemy, informational countering of technical means, increasing the grouping of forces and means of tactical nuclear weapons.

With the onset of aggression, forces and means of tactical nuclear weapons solve the tasks of defeating individual elements in the opposing grouping of enemy troops in order to disrupt control or reduce its effectiveness at the operational level (this will keep the aggressor from escalating the conflict). Single (selective) nuclear strikes of the minimum total power are applied to individual elements of the military grouping, to the extent possible excluding the direct defeat of the civilian population.

Successful fulfillment of nuclear deterrence tasks at the regional level depends on the range of damage to enemy targets, our ability to deliver single demonstration and deterrent nuclear strikes with available forces and means of tactical nuclear weapons, and the ability to hit typical targets with the required damage.

Of all the forces and means of tactical nuclear weapons, consider the most modern missile system (RK) "Iskander-M".

Currently, the following classification of defeat zones has developed: the tactical zone for building enemy battle formations — distance from the 100 – 150 LBS; operational-tactical (200 – 300), operational (400 – 500), operational reserves and rear facilities (800 – 1000) . Given the maximum range of the launch of the Iskander-M complex and the removal of its battle formations from the LBS, we will determine the capabilities of the Republic of Kazakhstan. The missile launch range with YABCH - 400 kilometers. At the same time, important enemy targets are affected in tactical and operational-tactical (200 – 300 kilometers) zones.

However, Iskander-M is designed for missile brigades of operational commands, and the launch range limitations for this complex, established by the INF Treaty (up to 500 kilometers), do not allow this RC to hit enemy targets in the operational zone and operational reserves where the most important objects. In our opinion, for a long time it would have been expedient for Russia to get out of compliance with the specified agreement to modernize the Iskander-M for launch range to 800 – 1000 kilometers. If the demonstration of low-power demonstrative deterrent nuclear strikes by the Republic of Kazakhstan does not stop the enemy, then tactical nuclear forces can launch a group nuclear strike against the main group and thereby force the enemy to de-escalate the aggression.

An example of a successful resolution of an emerging conflict in the nuclear deterrent system is the Caribbean crisis of 1962. The Soviet Union conducted a brilliant operation "Anadyr", as a result of which our launchers with YABCh were deployed in Cuba. For the American side, these actions were completely unexpected. At that moment, the world was hanging by a thread from unleashing a global nuclear catastrophe. The US leadership demanded the immediate withdrawal of Soviet strategic forces from the island. The USSR set its own conditions: America was demanded to withdraw the carriers of nuclear weapons stationed in Turkey and Italy. A compromise has been reached. This example showed the real capabilities of the nuclear deterrence system, therefore, at the regional level, the security of Russia can be ensured.

Thus, nuclear deterrence at the regional level has the full right to exist. At present and in the near future, new types of weapons, including ONFP, will not be developed and introduced into the RF Armed Forces, the considered concept will become a real deterrent to aggressive aspirations. These proposals have already been worked out in research centers. Today, it is necessary to start working out in the troops in various types of exercises questions of regional nuclear deterrence, and also to include them in the system of combat and professional training in military educational institutions.