Hot summer of 53 in East Germany

25 2013 June
15
This 60-old event at the very beginning of its development was reminiscent of the modern non-violent color revolution.


However, 17 June 1953, demonstrations of workers in the GDR with acceptable economic requirements for the authorities quickly turned into riots. The seizure of state institutions, attacks on prisons with the aim of releasing prisoners, reprisals against individual party-state officials, and a mob smashed border facilities began. It got to the point that not only criminals were released from imprisonment in the joyful turmoil, but, as they say, the Nazi concentration camp guard. Then came the purely political demands for a united Germany, as well as the inscriptions on the walls: “Ivan, go home.”

Under the conditions of the still occupying regime in this part of Germany, Soviet troops quickly and decisively without regard to the international community suppressed this uprising. 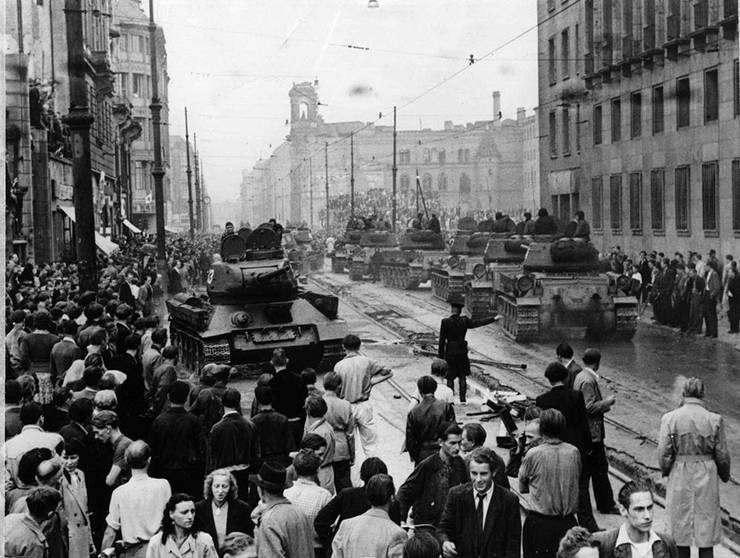 GUILLOTINE IS NEEDED IN ANY MODE

Despite the mass uprising, in the GDR, from 17 to 29 June, totally 125 people were killed on both sides. In Western countries, the death toll is overestimated, but many foreign researchers agree with the figure for the death toll. About 1 thousand were injured. About 20 thousand demonstrators were arrested and detained. The verdict of the Soviet military court shot five people. According to the verdict of the German court, two people sentenced to death were executed on the guillotine in Dresden. This instrument of execution went to socialist justice from the Nazi regime. As written in the West, "the guillotine was a proven and proven death machine." At the end of the war, the Nazis dismantled it and drowned it in a lake near Dresden. Guillotine caught with German diligence washed, cleaned, set up and re-launched into the same Dresden prison. It was used until the 1966 year. Historically, on the German lands, beheading was considered the “ignoble” type of death, unlike shooting.

Why were there few victims in the GDR, unlike the bloody events in Hungary in 1956? Hungary was a member of the UN and a sovereign country. There, part of its national army opposed the Soviet troops. In addition, the Soviet command in Hungary did not immediately give the order for retaliatory fire to defeat. And in the non-sovereign GDR, the occupation regime remained. No explicit intervention by the Western powers in the East German riots was noticed, except for loud and inflammatory broadcasts from West Berlin controlled by the American radio station RIAS. This radio station, which called for a breakthrough of the "Iron Curtain and the unification of the country," was listened to by a large part of the population of the GDR. The Soviet command did not respond to the statement of the commandants of the three western sectors of Berlin, who protested against the use of force by the Soviet side. And at the same time, these commandants did not stop the delivery of buses to the border posts in Berlin of numerous demonstrators from their sectors. And on the opposite side there were already formidable Soviet Tanks.

A shot from the attic of the house kills the Soviet tanker major. An order about return fire, sounded for the population, including tank guns in attics, is instantly issued. After that, the tanks were no longer shot. Stones were sometimes thrown at them to damage the radio antennas.

In the GDR in 1953, there was still no own army. Four motorized infantry battalions were part of the Barracks People's Police (CNR), the total number of which was about 11 thousand people. And in some units of the rest of the people’s local police, according to the legislation, there was no weapon weapons. Their weapons were considered rubber truncheons and shepherd dogs. The police were unable to resist the rebels. And those appeared rifles, machine guns and even machine guns. The conditions of the still occupation regime allowed the Soviet command to harshly suppress and eventually crush the armed resistance. A good example of the rapid response of the occupation authorities. We read the announcement of the Soviet military commandant's office of Magdeburg: “... Citizens of Darch Alfred and Herbert Strauch were sentenced by the court of the military tribunal to death by firing squad for active provocative actions of 17 on June 1953 of the year, against the established order, and also for participation in gangster actions. The sentence was enforced on 18 June 1953 of the year. "

Unexpected for Western countries was the fact that a large demonstration of 24 in June of the youth of East Berlin in support of the actions of the Soviet authorities came out a lot of citizens. And that was it! By 1 July 1953, the situation in the GDR was in fact normalized. And the famous German love of order, as well as the memory of the war and the crimes of German Nazism, close to everyone, became a holding force for many citizens of the GDR. They did not support and did not come to the demonstrations that led to unrest in the country and subsequent victims. 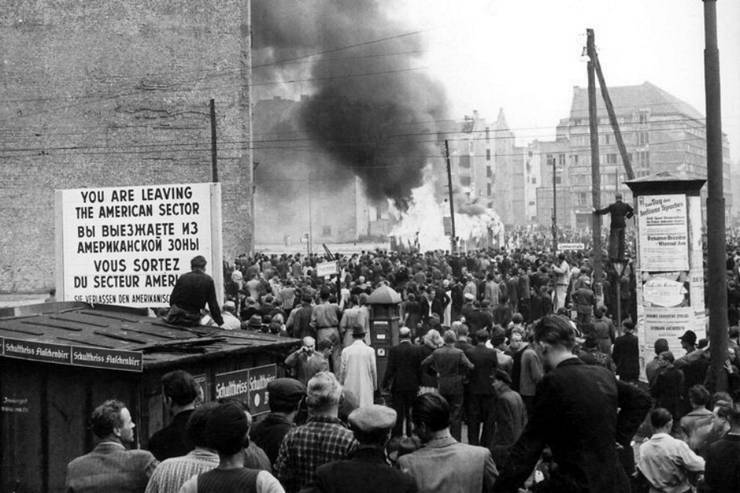 West Germany was not as badly affected by war as East Germany. She experienced rapid economic growth due to billions of dollars in US investments. And in the GDR, the economy developed extremely slowly. Almost all of the heavy industry and the raw material base of pre-war Germany were in the Federal Republic of Germany. The USSR simply did not have the means to effectively assist the GDRs in the form of loans. And Moscow could not reduce the size of reparations from the GDR at that difficult time. Tens of thousands of highly qualified specialists emigrated from the GDR to the Federal Republic of Germany.

Two months before the June 1953 events in the GDR, prices for clothes, shoes, public transport, as well as bread, meat and other products were raised. Then a government decree was issued, according to which production standards at enterprises and construction sites were increased by 10 – 30%. All this led to a sharp deterioration in the standard of living of the population. Meanwhile, West Berlin was turning into a "showcase of the free world". Noisy beauty contests, car races, the opening of huge and luxurious stores - all this made a depressing impression on the citizens of the GDR.

The serious political and economic mistakes of the leadership of the GDR on the intensified construction of socialism were sometimes and at first glance invisible, but provocative. Too late it was noticed in Moscow. And the accidentally developed "new economic course", sparing private owners and entrepreneurs, including in agriculture, did not have time to explain to most citizens. Moreover, raising production standards - the main reason for strikes at factories and construction sites - was not immediately canceled at the very beginning of the unrest. Because of these new norms, workers' wages have declined by one third. Another seemingly banal and supposedly insignificant fact. A very small spark can cause a huge fire. Higher prices for sugar and other products lead to higher prices for artificial honey and jam. For all Germans, these foods are historical, national and favorite food, as, for example, for Chinese rice. Everywhere followed an indignant murmur on this negative fact. The German worker began to receive less money. And his frau could no longer buy or make honey in the usual amount and jam. A bar of the same chocolate cost 5 times less in West Berlin than in East Berlin.

A popular uprising led to the lifting of the occupation regime in 1954 and the acquisition of sovereignty by the GDR. In August, 1954 of the USSR freed this country from paying the remaining 2,5 billion of reparations, and also transferred the GDR 33 industrial enterprises. In addition, the Soviet side provided a loan and made additional deliveries of goods. All this greatly improved the lives of the German population and led to the stabilization of the political situation. GDR will become a member of the UN. 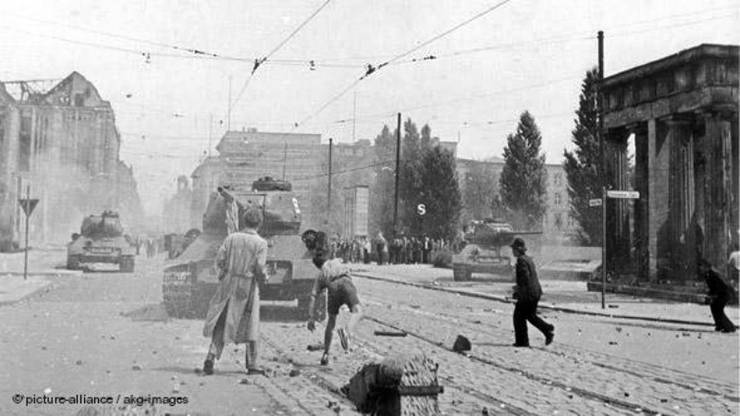 The report of the US High Commissioner in Berlin to the State Department 25 September 1953 of the year, in particular, said: "The Soviet army demonstrated the ability to quickly mobilize and suppress unrest on the first order ... Soviet troops demonstrated extremely high discipline, self-control and endurance, which came as a surprise to all but primarily for East Germans. ”

The June 1953 events of the year in the GDR took the anti-Soviet emigrant organization People's Labor Union (NTS) by surprise. Without proper verification of the facts, the NTS leaflet will fussily write about the executions of Soviet soldiers who did not shoot at the German workers. We read in a leaflet that, near Magdeburg, in a forest glade, 28 was shot on June 1953 of the year 18 soldiers of the 73 Infantry Regiment. Among them was the corporal Alexander Shcherbina, private Vasily Dyatkovsky and sergeant Nikolai Tyulyakov. Another 23 Soviet soldiers shot at the slaughterhouse in Berlin. A year later, in June, a modest obelisk was erected in Berlin’s US sector in 1954. Prominent figures of the Russian emigration, including Alexander Kerensky - the former head of the Provisional Government, arrived at its opening. On gray granite there is an inscription in German “Russian officers and soldiers who had to die because they refused to shoot 17 June 1953 fighters for freedom”. And what do famous German historians who studied this topic write about it today? They write: “These soldiers never existed. And they could not be shot. They were signs of a cold war. ” The rumor about the shooting of Soviet soldiers stubbornly spread. They contain references to the stories of Soviet officers who fled to West Berlin. One of them is Major Nikita Ronshin. But the latter fled to West Berlin two months before these events. And the specified 73 th regiment left Germany immediately after the end of the war. In 1989, German historians searched the USSR for documents about these shootings. Found nothing. Then they searched already in independent Ukraine and also did not find anything. One of the shot - my namesake Sergeant Nikolai Tyulyakov. I also tried to look to the best of my strength and capabilities, but also unsuccessfully. And those who claim to be executed write that by the order of Khrushchev all documents were destroyed. Like, there were reports to the Kremlin from the scene of events from two assistants to Beria: generals Amayak Kobulov and Goglidze (both shot by a court sentence). During Lavrentiy Pavlovich’s trip to the rebellious GDR, his duties as Minister of the Interior were performed by General Ivan Serov. He was close to Marshal Zhukov and would become the man of Malenkov and Khrushchev. Beria was arrested in the Kremlin 26 on June 1953 at a meeting of the country's leadership following his trip to the GDR.

The June events of 1953 of the year in the German Democratic Republic finally closed for the Kremlin the topic of the possible unification of the two Germanys. After the war, Stalin assumed the creation of a united, neutral Germany, friendly to the USSR. But history decreed differently. In Berlin, a separation wall was built between two different parts of the city. The CIA and other Western intelligence agencies, as well as politicians, used the miscalculations and mistakes of the leadership of the GDR in their subsequent subversive activities against the countries of the Soviet bloc. 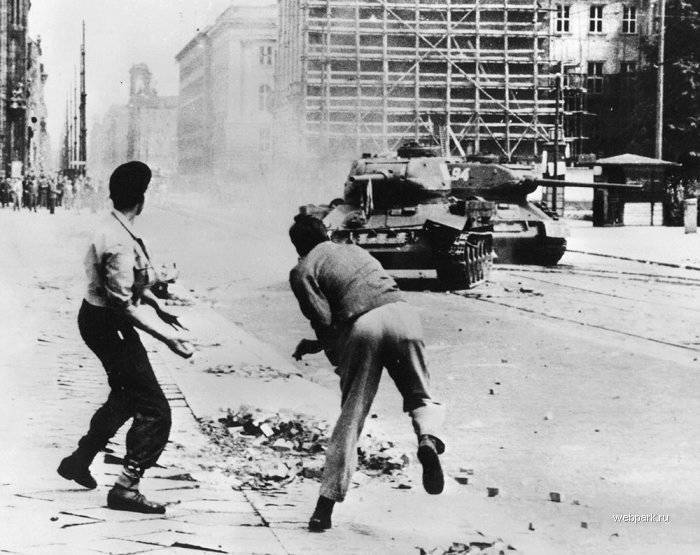 Ctrl Enter
Noticed oshЫbku Highlight text and press. Ctrl + Enter
We are
Sixty Years Since the Formation of the National People’s Army of the GDRPopular unrest in the USSR. 1953-1985
Military Reviewin Yandex News
Military Reviewin Google News
15 comments
Information
Dear reader, to leave comments on the publication, you must sign in.