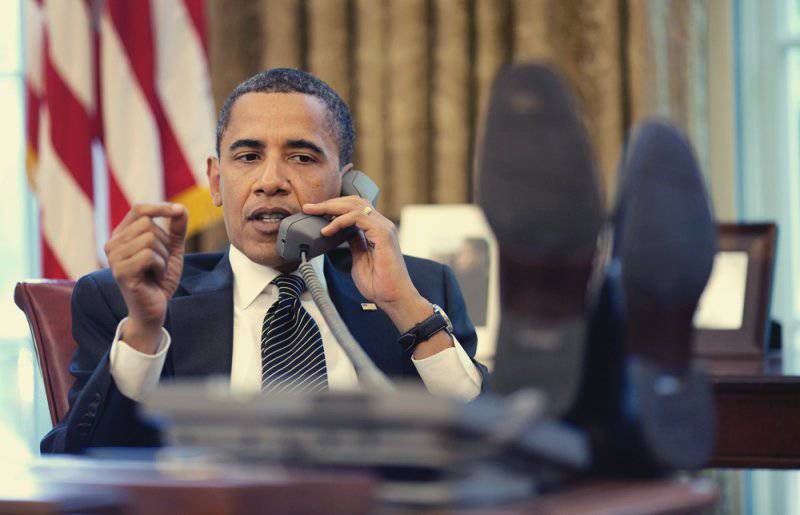 If you believe the sources in Congress, then the answer will be briefly - Iran and Hezbollah. “The victory of the Syrian army in Quseir was something more than the Administration could recognize, given the strategic position of the city in the region. The capture of the city by the forces of Assad essentially added Syria to the Iranian list of victories, which began with Afghanistan, Lebanon, Iraq, and its growing influence in the Gulf. ”

Our sources claim that in reality Obama did not want to provide direct military support to the rebels who are fighting to overthrow the Assad government, and did not even want to use American military force in Syria for several reasons. And among these reasons is the lack of public support by the Americans of another war in the Middle East; the fact is that it turned out - on the horizon, there is no acceptable alternative to the government of Assad; and the position of the US intelligence community and the State Department and the Pentagon is that intervention in Syria can go sideways for the US and destroy what is left of American influence in the region. In short, the fact that the US is being drawn into Syria may turn out even worse than with Iraq, leading to the intensification of regional religious wars in the absence of any visible positive result.

Obviously, Obama was previously, before Quseir, seriously tuned to a diplomatic settlement through negotiations, and even more positive signals came from Damascus, Moscow and even Tehran, according to John Kerry. But everything changed because Russia and the United States tightened their demands. Consequently, the Obama administration has now, in effect, surrendered at the diplomatic level. This observation is confirmed by more than one congressional officer — the Obama team decided that the Assad government did not receive its signal or did not take it seriously, and that the recent military successes of Assad and its growing popular support mean that no serious initiatives are expected at Geneva II.

In addition, Obama has recently weakened his domestic political positions, and a series of strife and potential scandals, not the least of which was the disclosure of data on the enormous violations of privacy protection by the NSA. In addition, the military lobby, led by Senators McCain and Lindsay Graham, continues to drum and claim that Obama has broken the oath taken when he took the presidency and endangers the interests of US national security, allowing Iran to effectively seize Syria. . Both senators welcomed preliminary data on the use of chemical weapons. For many months, they said that Obama is not doing enough to help the rebels. “Trust in the United States is at risk,” they say in a joint statement released this week. “It’s not time just to take the following necessary steps. It’s time to take decisive action, ”they said; This, for example, such as the use of long-range missiles, in order to suppress the air forces of Assad, and air defense systems.

Another neocon, Senator Robert P. Casey, Jr., said that opposition forces risk defeat due to the absence of heavy weapons and warned that such weapons may not be enough. "The United States must act quickly to change the situation in Syria by deciding to hold Syrian air forces on the ground with long-range weapons and creating a security zone in northern Syria using Patriot missiles deployed in Turkey," Casey said.

According to some analysts, Obama could, as an alternative, allow arming and training the Syrian opposition in Jordan without establishing a no-fly zone. This is unlikely, according to observers in Washington, because Petagon wants to end the Syrian crisis by the end of the summer, and “not to work for a long time with a motley handful of jihadists whom we could never trust and on whom we could not rely. The administration concluded that, giving a penny, you will have to give back a pound, that is, not to allow Iran to control Syria and Hezbollah in order to repair

Secretary of State Kerry 13 May 2013 held meetings with more than two dozen military experts. The Washington Post reports that Kerry believes that it may not be enough to supply the rebels with weapons too late to really change the balance of power in Syria; This will require a "military strike to paralyze the military forces of Assad." A source at the Pentagon reports that the United States, France and Britain are considering a tough decision to reverse the current impetus of Assad and quickly build a counter-impulse in support of the rebels no later than the end of summer.

Soon after the meeting began, the King of Saudi Arabia, Abdullah, hastily returned to Saudi Arabia from his palace in Casablanca, Morocco, after a phone call from his intelligence chief, Prince Bandar Bin Sultan. Bandar reportedly had a representative at a meeting with President Obama’s team at the White House. To King Abdullah, Kerry reportedly offered to prepare for a rapid expansion of the growing regional conflict.

What happens before the end of summer is likely to be a disaster for Syrian society and, possibly, Lebanon. “The red line with the use of chemical weapons” on Capitol Hill is not seriously considered, since the “substantive evidence” of the old months is the same that they suddenly began to quote to justify what might turn into, in essence, a full-scale war against the Syrian government and anyone who will stand in this way. Making hands on 125 victims of chemical weapons, who would not use them, fade away in comparison with more than 50 000 lives that will be lost in the coming months is a figure that the Pentagon and White House planners "laid" in the price of overthrowing the Assad government .

"We have to observe the rapid escalation of the conflict," - wrote the employee of the Committee on Foreign Relations of the US Senate in a letter sent by e-mail. - “The President has decided to provide humanitarian assistance, as well as political and diplomatic support to the opposition, if necessary. In addition, the Supreme Military Council will be provided with direct support, including military support. ” He quotes the words of Ben Rhodes, Deputy National Security Adviser, for the media 13 of May 2013 of the year and having the same meaning.

Part of this American “humanitarian aid” will be in the coming weeks to establish a “limited humanitarian no-fly zone” that will begin several miles from the Jordanian and Turkish borders in a number of areas of military operations on Syrian territory, and will be identified and presented as a limited attempt to prepare and supplying rebel forces and protecting refugees. But in reality, as we have seen in Libya, the Syrian no-fly zone is likely to include all of Syria.

Libyan no-fly zones made it obvious that there is no such thing as a “restricted zone”. In short, the “no-fly zone” means actually declaring war. If the United States and its allies begin to establish no-fly zones, they will expand and strengthen them, taking countless military steps to protect these zones - until the Syrian government falls. “It captures the spirit when you think about how it will all end, and what answer Iran and Russia will give,” one source concluded.

The White House is trying to reassure those few in Congress, like most American society, that America’s participation will be limited and that the establishment of no-fly zones does not require the destruction of Syrian anti-aircraft artillery. This is more nonsense. During the establishment of a no-fly zone in Libya in the summer of 2011, I witnessed how the United States supported it with all kinds of refueling, electronic interference, special forces, and by mid-July even a small bicycle child was not safe. During the 192 day of patrolling Libyan non-flying zones, the NATO countries made 24682 departures, including 9204 departures for the purpose of bombing. NATO said it never missed the target, but that’s not true. Hundreds of civilians in Libya were killed by planes in the no-fly zone, which either missed targets or dropped bombs before returning to the base, conducting approximately 48 bombings per day using various types of bombs and missiles, including more than 350 Tomahawks.

At the congressional hearings in 2011, then Secretary of State Robert Gates explained everything well, noting when discussing the Libyan topic, that “the flight-free zone begins with an attack to destroy the entire air defense ... and then you can send airplanes throughout the country and not worry about that our guys are shot down. That's how it all starts. ”

According to reports published in the American media, Obama could, as an alternative, allow arming and training the Syrian opposition in Jordan without introducing non-flying zones. But this seems unlikely, because the Pentagon is eager to end the Syrian crisis by the end of the summer, as explained, and “not to work for a long time with a motley crowd of jihadists whom we could never trust or rely on. The administration has concluded that it is not worth stopping halfway. ”

In response to a question about how events in the region could unfold in the coming months, a very knowledgeable and long-standing assistant congressman replied: “Well, Franklin, maybe someone will pull the rabbit out of his hat, like a magician, to stop the desire for war. But to be honest, I strongly doubt it. From the height of the post that I occupy, it is clear that the Syria that we know may not become soon. And perhaps other countries in the region too. ”

Ctrl Enter
Noticed oshЫbku Highlight text and press. Ctrl + Enter
We are
Situational analysis of the death of the MH17 flight (Malaysian Boeing 777), made on the basis of engineering analysis from 15.08.2014Syria: Americans scare themselves, and Asma Asad buys chairs
Military Reviewin Yandex News
Military Reviewin Google News
77 comments
Information
Dear reader, to leave comments on the publication, you must to register.