"British Lion" turns into a jackal 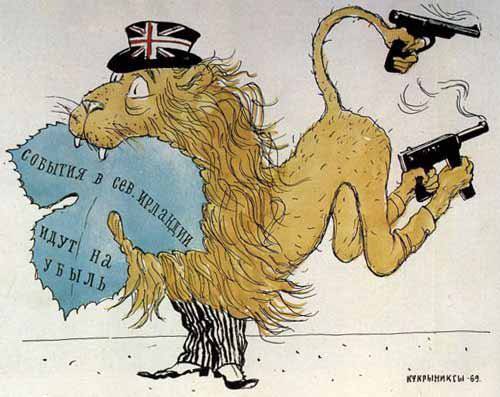 Who does not remember these lines of Mayakovsky: "Let, grinning like a crown, raise the British lev howl?" A century has passed, and Britain is once again "grinning with a crown," but its behavior does not resemble the king of animals, the lion, but the petty lackey - the jackal, who is running errands for Washington.

At a time when the great “fighter for democracy” - Turkish Prime Minister Erdogan - brutally disperses demonstrators in Taksim Square (so that the number of injured exceeded 5 thousands) - the West continues to look for violations of this very democracy in Syria to justify the supply weapons scumbag fighters.

Following the United States, which allegedly “found” chemical weapons in Syria and on this basis speaks of the need to support “good terrorists” - Britain also took over the baton - first the foreign minister William Hague and then the prime minister David Cameron completely, without any evidence, take for granted the words of the United States. Similarly, this country 10 years ago "believed" in the presence of weapons of mass destruction in Iraq (which was not there).

In an interview with the Guardian newspaper, Cameron said that he "shares the US confidence that the Syrian military used chemical weapons." At the same time, he, in the best traditions of double standards, blamed terrorists and said that they did not use chemical weapons.

The conclusion made by the British Prime Minister, as expected, is no different from the position of Washington. As befits the faithful jackal Tabaka, he repeated after the American Sherkhan that his country also intends to assist the Syrian "opposition". He openly admitted that he wanted to help this “opposition” to “achieve success in the fight against the president”, but did not ask how similar intentions contradict the UN Charter and the elementary principles of international law prohibiting interference in the internal affairs of other states.

At the same time, Cameron does not even stop understanding that radical extremists are present in the ranks of the Syrian militants. “I recognize that there are elements in the ranks of the Syrian opposition that we do not like very much, who are very dangerous, very extremist, but we don’t have anything to do with them and want to be expelled from Syria,” he said. “But among the Syrian opposition, there are elements who want Syria to be a free, democratic country where the rights of minorities, including Christians, are respected. We have to work with them, and we work with them. ”
Just forgets Cameron about a few points. First, the only force that can expel (and expel!) Extremist mercenaries from Syria is its Armed Forces, who do not spare their lives in the fight against these bloodsuckers. Secondly, the rights of minorities in Syria, in particular, of Christians, were always respected without it, Cameron's “democracy”. But the “oppositionists” wrote on the walls of the houses slogans “Christians to Beirut, Alawites in a coffin”, they execute people in Aleppo for “blasphemy” and “atheism”, they kidnap girls in Raqqa province only because they dare to walk without hijab.

As for certain “other elements” who want democracy, change, etc. - that is, non-extremist opposition - such opposition does not sit in Istanbul and Dohahe. This is the internal opposition that is in Damascus itself. Two representatives of such opposition are participating in the government. Such opposition creates its own parties and movements, sits in parliament, and does not raise weapons against its own country. And this opposition does not want the intervention of the Cameron, Obam and others like them. The non-extremist opposition needs neither weapons nor ammunition.
Cameron made a very valuable admission: "Currently, the UK, as well as the USA, France and allies from the Gulf countries provide assistance, train, supply non-lethal equipment, such as vehicles, to the current Syrian opposition and try to help it."

The Syrian side has been saying for more than two years that what is happening in the SAR is not a people's revolution at all, as Western media claim. This is foreign intervention, the arming of terrorists, their training and financing. And now Cameron confirms the very truth that the Western media are trying to hide throughout this time!

Moreover, Cameron confirms that the Gulf countries are allies of the West. What is this country - everyone knows: Qatar and Saudi Arabia. Monarchy of the medieval type, where it never smelled of democracy. Good allies have chosen to be "fighters for human rights", nothing to say!
Speaking about the goal of lifting the EU embargo on the supply of weapons to Syrian militants, he said that this is done to exert pressure on the president of the SAR, Bashar Al-Assad: “He must feel that he is under pressure. It is necessary to force him to sit at the negotiating table. ”

The irony of fate is this: it is the legitimate government and the president of the UAR that always spoke of their readiness to sit at the negotiating table. And they always sat at this table. And they have always cooperated with the UN, taking any reasonable initiatives.

So, at the end of 2011, Syria accepted the initiative of the Arab League to deploy Arab observers. But their report did not like the Qatari and Saudi monarchs, and the mission was curtailed. They began to say that the Arab observers, they say, are not professional enough, and they should be replaced by UN observers. In the spring of 2012, Syria, on the advice of Russia, agreed to host the UN observation mission. But the UN observers were forced to admit the existence of terrorist groups in the country, and they were also withdrawn. Syria again agrees to sit down at the negotiating table, this time within the framework of the international conference “Geneva-2”.

Does the so-called "opposition" sit at the negotiating table? Every time she says “no”, inventing various pretexts for this. That puts the preconditions, it organizes provocations. For the sake of breaking the cease-fire agreement at the end of May 2012, the terrorists staged a massacre of citizens in the village of Hulia, Homs province, blaming the most brutal crime on the army (although the al Qaeda handwriting in this massacre was visible to the naked eye). Before each key meeting or conference on Syria, barbaric attacks were organized in Damascus and other cities in which dozens of people died. Now they say that they do not intend to take part in the Geneva-2 conference.
However, many Syrians, in connection with the idea of ​​this international conference, fear that there will again be any provocations. Possible new violent attacks.

And now, returning to Cameron's words that pressure should be exerted on one of the parties in order to bring her to the negotiating table, we ask: so which side should we press on? To the one that agreed to participate in the negotiations or to the one that avoids them?

The answer seems obvious. But Britain for the sake of the United States gives another answer - absurd and contrary to elementary logic.

These days, the next G-8 summit in Northern Ireland begins - by the way, on the land of the oppressed “democratic” Britain, where a lot of Irish patriots have been shed.

On the eve of the event, negotiations were held between V.Putin and D.Cameron. Putin expressed Russia's position that the crisis in the SAR can only be resolved through political means. He stressed that the opinions of Russia and Britain regarding the crisis in Syria are different.

“I think you will not deny that it is hardly worth supporting people who not only kill their enemies, but also reveal their bodies and eat their insides. Do you want to support these people? Do you want these people to supply weapons? But then this, apparently, hardly has anything to do with humanitarian values ​​that have been preached in Europe for hundreds of years. In any case, in Russia we cannot imagine such a thing, ”he said.

The President added that Russia does not violate the laws by supplying weapons to the true government of Syria, and advises all others to also adhere to the norms of international law.

A few days earlier, on June 15, Russian Foreign Minister Sergey Lavrov also spoke out against a similar approach by the United States, Britain and France to the affairs of Syria. At the talks with his Italian counterpart, Emma Bonino, the Russian Foreign Minister said that according to the rules of the Organization for the Prohibition of Chemical Weapons, various samples of blood, urine, soil, clothing, etc. They are considered serious evidence of the use of chemical weapons only if they were taken by experts and controlled throughout the entire journey to the appropriate laboratory. “The materials with which we were introduced some time ago by our American partners, and to them the British and French, do not contain any confirmations or guarantees that the samples on the basis of which far-reaching conclusions were made met the strict criteria of the Organization for the Prohibition of Chemical Weapons,” Lavrov said .

He added that if Western countries really want to convene the Geneva-2 conference, then they should not indulge one of the parties, namely, the militants. Any steps to arm them will only strengthen the militants in the belief that they need to maintain an irreconcilable position, the diplomat said. With this approach, he concluded, the negotiations will never begin.

As for Cameron, while supporting the terrorists in Syria, he intends, nevertheless, to fight terrorism in general. The British prime minister said that his country under the chairmanship of the G8, focuses on the so-called "three T": trade, tax, transparency (trade, taxes, transparency). And there is also the fourth "T" - terrorism. He noted: “We will discuss in detail the fight against terrorism ... We will also discuss the fight against the financing of terrorism.”

But just now Cameron spoke about the need to provide any kind of assistance to Syrian terrorists, even despite the fact that there are scumbags in their ranks! It turns out that such a fight against the financing of terrorism, announced by the prime minister, should begin, first of all, with his own person!

However, in Britain itself the voices of sober people, whose heads do not burn with heat from the thirst for wars, are heard. So, the mayor of London, Boris Johnson, said that Britain should not use Syria as an arena for flexing muscles. He said that any weapon directed by the Syrian "opposition" could end up in the hands of al-Qaida.

In a letter sent to the Daily Telegraph newspaper, Johnson stressed: “We will not get a truce by handing the weapon into the hands of maniacs.” In his opinion, the only way to resolve the Syrian crisis is a general cease-fire.

But such a cessation is not in Obama's interests, therefore Cameron in every way promotes the idea of ​​providing military assistance to terrorists.

Thus, Britain is deprived of its own will. From the king of beasts, the "British lion" in his eyes turns into an American jackal and sings along with the will of Washington.

PS Meanwhile, Cameron pets continue their misdeeds. On the night of 16 on 17 June, a strong explosion thundered in Damascus near Mezze. A suicide bomber blew up a car bomb at a checkpoint at the entrance to the Mezze military airfield. He tried to break into the territory of the airfield, but he failed. CSM car seemed suspicious, and they tried to detain a terrorist, but he brought an explosive device into action.

A nearby residential area was affected.

According to preliminary data, 10 people died. Eyewitnesses say that there are a lot of wounded. The ambulance cars drove all night.

Ctrl Enter
Noticed oshЫbku Highlight text and press. Ctrl + Enter
We are
Results of the week "I do not need a Turkish coast"Turkey: fighters for democracy came together
Military Reviewin Yandex News
Military Reviewin Google News
57 comments
Information
Dear reader, to leave comments on the publication, you must sign in.