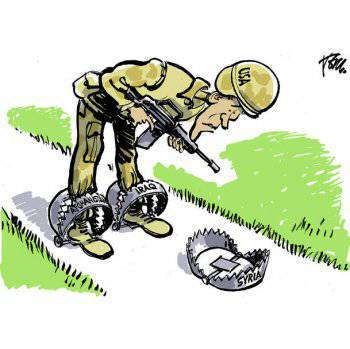 The Middle Eastern drama is entering a new phase. Bashar Asad won an important victory in the south of the country, took El Quseir and is close to success in the north, near Aleppo. For the US, this is apparently a red line, and he is in a hurry to accuse Assad of applying chemical weapons. These charges are worth the famous tube Colin Powell, which he waved before the US invasion of Iraq. But the fact that the US is so crudely fabricated as a pretext for a new invasion says that they are in an unenviable position.


In general, the very recent successes of Asad are already in themselves - a great success of Russia's policy in the Middle East. Let us recall, a year ago, even our specialists in the East, including Satanovsky, predicted a painful death to the “Assad regime” in a successfully past period. The question is, what are their predictions worth? This is just a retelling of Western scenarios. Which did not take into account the "Putin factor", and he firmly stood up for Syria, especially since it could be done, unlike Libya, and clearly showed that Russia is still a superpower. That is, it can defend its interests, regardless of the world hegemon.

The determination of the Russian position on Syria is indicated by the introduction of a squadron based on the Syrian ports to the Mediterranean Sea - this is a signal to everyone that Russia will be with Syria to the end, not to mention the fact that this is a painful click on the US naval nose. In this regard, a little strange information about the C-300 air defense system, which is supplied to Syria or not, is of heightened interest. Vladimir Putin said that the agreement between Russia and Syria for the supply of C-300 "has not yet been implemented." And what does this mean "bye"?

If you look at this “bye” a little wider, then it is easy to see that our Mediterranean squadron of 16 ships must be covered from the air, and also its Syrian bases. Therefore, C-300 must already be in Syria in order to cover our fleet, but at the same time they may not be “transferred” to the Syrian side. While this is not necessary. But if a “no-fly zone” appears over Syria, the C-300 may suddenly appear in the Syrian army and make it truly no-fly.

States need only threaten military supplies militants. But what weapons can they deliver, which Saudis couldn’t they? This is a game for the public. The real “last” argument of the American empire is the establishment of a “no-fly zone”, that is, the bombing of Syria to the Stone Age, but first it needs to unravel the connection between “bye” and C-300.

The firm position of Russia on Syria, which this time is unlikely to change all the beliefs of the West, the help of Syria from Hezbollah and Iran turn the “Syrian spring” into a trap for the States. In Syria, they suffer not only a military-political fiasco, but also lose face by supporting outright al-Qaida militants. The revelations of Edward Snowden of the global surveillance of the American special services turned out to be very useful. In violation of all human rights. “Big Brother” finally appeared from the shadows, and it turned out that he was not a superman at all, but just a spy, his word cannot be trusted.

What can they do in this situation? Perhaps the only lever of pressure on Moscow is “soft power”, activating our “fifth column” so that it repeats at least the “Turkish spring”. A pretext for this can be found, or it can be fabricated, but revolution is impossible in Russia in the summer, the people are resting, and no one can raise it. Americans are not lucky with Putin ...

Ctrl Enter
Noticed oshЫbku Highlight text and press. Ctrl + Enter
We are
Bashar al-Assad: In Syria, not the “revolution” that the enemies are talking about, but the revolution of the army and the people against terroristsSyria: Americans scare themselves, and Asma Asad buys chairs
Military Reviewin Yandex News
Military Reviewin Google News
274 comments
Information
Dear reader, to leave comments on the publication, you must to register.