Cruelty and the Middle Ages 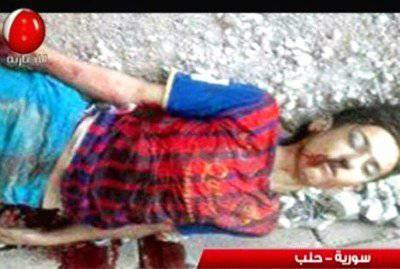 While the world is preparing for the Geneva-2 conference on Syria, constantly delaying its term, terrorist acts continue to be carried out in Syria. On June 11, two explosions thundered on Marje Square in central Damascus. it historical the area on which in the old days there were crowds of tourists. Next to her are budget hotels. Once upon a time, city guests from various countries lived in them, now they were filled with refugees.


This explosion is not the first in this area. He took the life of a 14 man. The police station was particularly hard hit. Dozens of people were injured, including children.

Syrian Health Minister Saad An-Naif visited the hospital "Dimashk", in which the victims are. He inquired about their state of health and condemned this barbaric crime.

A few days earlier, on June 8, a major terrorist attack occurred in the city of Homs. In one of the residential areas, Al-Adawiyah, in which many refugees settled, an explosion of a car bomb was heard near the church. 7 people died.

On the same day, a series of terrorist acts took place in the southern province of Quneitra in the town of Khan-Arnab. One explosion thundered near the bus station, the other - in a residential area. People suffered, houses, shops, workshops were destroyed. A third terrorist attack was to take place, but the sappers managed to detect an explosive device in time.

This is not the first time that history has been repeated - as soon as terrorists are defeated by the Syrian army, they begin to take revenge on innocent citizens who can reach their bloody hands ...

Meanwhile, the world is seriously affected by the murder of an 15-year-old teenager in the city of Aleppo, who was shot in front of his parents after a quick sharashkin "trial" on charges of "heresy." The UN Children's Fund UNICEF issued an official statement condemning this infanticide.

In general, such monstrous crimes, as a rule, are capable of changing the world point of view on what is happening. So, a few decades ago, after the world went around a photo in which a naked girl in Vietnam was fleeing from American napalm, such an anti-war movement arose that the United States was soon forced to curtail its “mission of democratization”.

Now public opinion is more inert. Why did not see the world in Syria! Massacres committed by militants (in the village of Al-Hula in May last year, which was dumped on the army. In the village of At-Tremse near Hama in June last year. In the Khan al-Asal district of Aleppo province, where the militants used a chemical warhead missile ). Cutting heads Mockery of the bodies. Involving children in the ranks of the so-called "Syrian Free Army". The “oppositionists” mockery of old people (in particular, the famous video in which pseudo-revolutionaries captured the once famous elderly man who loved to wear yellow clothes and therefore became a local celebrity. In the video, the rebels beat and humiliate the harmless old man). Finally, frank cannibalism was revealed to the world when the “freedom fighter” in front of the camera bit off a piece of the heart of a dead soldier. The same fighter boasted how he sawed another person with a chainsaw, just because he was an Alawitite.

And now - another blatant crime of bandits - infanticide. Covered with a kind of "judgment" - very quick and merciless. Despite the fact that the mother of the deceased boy begged the militants not to kill his son.

In a statement on this occasion, UNICEF called on all international organizations to pay attention to this murder, condemn it and make every effort to stop violations of the rights of citizens, especially children.

While UNICEF condemns infanticide committed with medieval cruelty, the EU and the US are discussing a completely different issue - on the supply of additional “opposition” weapons.

What is happening in Syria has affected many of its citizens, including those who seemingly left and considered themselves saved from the horrors of war. In fact, it turned out that many of them fell into refugee camps in Turkey and Jordan. Living conditions there leave much to be desired, and many refer to refugee camps as a large prison from which they are not allowed to go.

Under these conditions, many families are forced to take extreme measures. And again - in the course goes the medieval practice. Juvenile daughters are married for money to rich people. Fathers of families, agreeing in fact to the sale of girls, believe that perhaps it would be better for them.
Meanwhile, in Syria, a new monstrous crime committed by the hands of the "opposition" occurred. This is not even the Middle Ages, but the era of savages ...

In Deir-ez-Zor province in the village of Hatla, 30 people were killed by gangsters. Most of them are old people, children and women. Their whole “fault” is the refusal to support the pseudo-revolution ...

Will those who intend to continue to help the “opposition” supposedly fight for freedom hear about the crime? For freedom from civilization and from life itself ...

Ctrl Enter
Noticed oshЫbku Highlight text and press. Ctrl + Enter
We are
Who blew up Turkey? The explosion in Istanbul and the "wave of terror" on Turkish soilTerrorist attack in the heart of Damascus
42 comments
Information
Dear reader, to leave comments on the publication, you must to register.