If one people conquers another

13 2013 June
49
If one people conquers another, takes rich loot, or takes possession of the lands of the enemy, how do the winners explain to themselves the nature of their success? The easiest way to say: we are stronger, more active, more united. This is a dangerous path.


Dangerous because true God is not only the God of a separate heart, but also a universal God stories. It is He who governs the affairs of the Pharaoh of Egypt and weapons Kira Persian If the kings of the earth become haughty, He will punish them, as was shown in the proud Nebuchadnezzar, who was excommunicated for three years and ate straw. 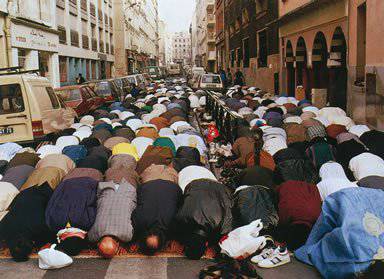 When the Jews took possession of the land of the Promise, Moses warned them: “You are not for your righteousness and not for the righteousness of your heart to inherit their land, but for the dishonesty of these peoples, the Lord your God drives them out of your sight and to fulfill the word Lord your fathers Abraham, Isaac and Jacob "(Deut. 9: 5)

Here is the formula: "not for your righteousness, but for their wickedness."

That is: you are not holy yet; You have many sins and moral weaknesses. But they are worse. They are wicked and disgusting. Therefore, you will win, however, not by yourself, but by My strength. Do not be proud.

To justify success, victory with moral superiority - what could be more natural? “Our cause is just, the enemy will be defeated, victory will be ours!” Outside the speaker’s personality, and without relativity to the time of pronouncing words, the text is quite biblical and goes far beyond a specific historical period.

The relations between the victorious and vanquished peoples are not limited only to battle questions. You can win the war and occupy a large territory, but learn from the defeated way of life, culture and anger Togo, from whom victory. There are many such “conquerors” who then themselves obeyed the conquered or became their disciples.

Therefore, it is said in a warning: “When the Lord your God destroys from your sight the nations to which you go to take possession of them, and you, taking them, will dwell in their land; then take care that you do not get into the net, following them, after exterminating them from your face, and not looking for their gods, saying: “as these peoples served their gods, so shall I” ”(Deut. 12: 29- 30) That is, the customs of the vanquished can be a network for the winners, and then a curse.

But how to apply what has been said to this day? This is not just a theory.

These are the thoughts that visited me and what I want to share.

Muslims are flooding Europe. Even the blind know about this fact, because, not seeing with their eyes, they hear about it with the ear of the ear.

The Muslim ethical thinking does not coincide with the European ethos: with the Christian - in many respects intersects, and in the new European it is the opposite. God needs to pray, neighbors need help, graves of ancestors need to be honored, for the sake of cleansing the mind and body you need to fast. All this is very clear to Muslims. Europeans only, the farther, the more these simple words are not clear.

Europe is the prodigal mother of all modern negative moral innovations. She, for example, is the mother of legalized perversions, crossing the family, as a fact. Europe is for abortion, for euthanasia, and for pederasty, and for the bashful silence of religious identity and the displacement of questions of faith to the periphery. Europe is “for” wherever conscience says: it’s a sin.

I hasten to say: this is not the whole of Europe. It has many faces, and there is a lot of “residual holiness” in it, as well as “residual beauty” and “residual wisdom”. But the European mental, ideological mainstream, which has lasted for several centuries, is not just atheistic, but also actively-godless.

Against this background, the Muslim population of the Old World arriving in numbers looks morally cleaner. Muslims are closer to the classical model of morality, in which elders are obeyed and respected, children give birth rather than being scraped out of the womb, perversions are called perversions, and not otherwise. The man is the eldest, the woman is subordinate to him, the children are obedient to their parents. What is easier? But Europe has recently learned to laugh at these words, like a medieval dream, and yet it is an integral part of the classical morality of the monotheistic people. For such people the future.

That's the conclusion. As the Jews who occupied Palestine heard from God that the wickedness of the inhabitants of Canaan destroyed them, so the multiplying Muslim population of Europe may consider itself the heir of European wealth because of moral superiority. That is: “If your men sleep with men and do not consider it even a sin, then I (a resident of the Maghreb says) will come to you, and eventually we will drive you out of your house, and settle in it, but God will be on my side” . Here is a capacious verbal expression of a very painful situation developing today.

It is warm and satisfying, and comfortable, and beautiful, and calm. However, it was calm. Already "was." A completely biblical scheme unfolds before our eyes.

And what about the locals? And it seems to me that for their wickedness they will be driven out from their land in various ways soon, because, as the Philistines of antiquity, fell in love with abominations and abandoned themselves to uncleanness with unsatisfaction. I do not know whether Muslims themselves think so. If not, that's fine. And if the scheme itself is clear to them, then - the end. They have the right to consider themselves to be a kind of Israel who seizes comfortable, alien cities on the basis of greater righteousness than the evaporating righteousness of the local people.

Righteousness and moral purity, loyalty to moral ideals, is the same survival factor as the careful operation of nuclear stations or road safety. Europeans worry about the purity of the water in the lakes and the right to life of those foxes from which they want to make fur coats. But somewhere here their moral concern ends. Meanwhile, God is really casting out of His sight and making outcasts of nations that have lost shrines and trampled conscience. The houses, wells and vineyards of these nations are given by God to others - those whose morality, though not flawed, is still higher than the morality of people who immensely sinners.

The picture is complicated. Complicated, if only because the multiplying Arab and African population of Europe itself is subject to corruption. They massively fall in love with the sinful "jolly" they see. But it is known that one rotten apple spoils the whole basket. Therefore, it was warned to the Jews at the time: “When you enter the land which the Lord your God gives you, then do not learn to do the abominations that these nations did” (Deut. 18: 9)

But one thing is clear: under the sign of the spread of debauchery and the loss of faith, there lives the sweet land of “holy wonders”. Their death is not our victory at all. You can not rejoice in their defeats. When the "Western" finally fall, the influx of sin we wash away themselves without a trace.

We ourselves can lose our own land because of personal iniquity. Strangers, surpassing us in morality, and therefore vitality, may soon have a smile and eat our bread before our own eyes. So constantly happening in history. Morality is not a habit and not a tradition accepted from fathers. This is a factor of survival and self-preservation.

Watch TV news and read the Bible carefully. Then the evidence base for the words just sounded will be obvious to you.