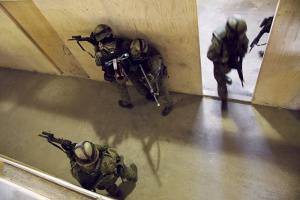 With cadet Sergey Ilyukhin and private Ilya Tiitto, natives of Sortavala and Petrozavodsk, we met in Helsinki on the island of Santahamin, in the Guards Chasseur Regiment of the Finnish Ground Forces. Sergey, a military specialist in communications and a civil engineer, completed his military service, was preparing to go to the reserve in the rank of junior lieutenant in a couple of weeks, and Ilya, the driver of an armored personnel carrier, still continued to pull the soldier’s straps. the stock was not very much - only a month and a half.


They were presented by the Russian delegation headed by Defense Minister Sergei Shoigu after we visited the barracks where recruits live, the commander of the Chasseurs regiment Colonel Pekka Saariho. “You can speak Russian with these soldiers,” said the colonel.

Finnish warriors introduced themselves to the Minister of Defense. They told him who they were and where they were from, how they turned out to be in the country of Suomi and what they like about their military service. Then, when the main group of our delegation switched to other objects that the hosts showed us, I talked with Sergey Ilyukhin for a few minutes, as far as time allowed. His monologue about himself and about service in the Finnish army - a little later. And now a little more about Sergey Shoigu’s visit to our friendly Finland.

The visit was very short. Only for one day. But according to the protocol of the visit, drawn up in advance and agreed upon, our head of the military department managed to do quite a lot during this time. He met and held talks with his young colleague, Finnish Minister of Defense Carl Christopher Haglund (born 1979), and exchanged views on a wide range of issues, ranging from the situation in Syria and Afghanistan, the expansion of NATO and the strengthening of European security and ending with the problems of military and military-technical cooperation between the two armies and states.

Sergei Shoigu laid wreaths at the grave of the famous son of Suomi, her prominent military, political and state leader - Lieutenant-General of the Russian Imperial Army, Marshal of Finland, who fought against our country before and during World War II, and its President from March 1944 to August 1946 years of Carl Gustav Emil Mannerheim. He visited the Helsinki parliament and in the absence of the head of state, who is now on a trip from the country, met there and held talks with Foreign Minister Erkki Tuomioja. Then he moved to the island of Santakhamina already mentioned by us, where he became acquainted with the training system of the armed forces of this country and, in particular, the Guards Chasseur Regiment of the Finnish Ground Forces.

Our neighbors showed the Russian defense minister not only military equipment in service with the Finnish army, but also how hot Finnish guys live and serve, and by the way, girls too. In the battle formation, including in the company of the guard of honor, who met Sergei Shoigu at the memorial complex "Hietaniemi", no less than 10% of women.
And if there is a universal military duty for the guys in the country of Suomi, everyone should serve, except, naturally, the sick and maimed, up to 30 years, then the girls enter the military service voluntarily. And serve with all on equal terms. Is that the barracks and showers they have separate.

TERRORISTS ARE REMAINED BY SCIENCE

And the fact that Finnish guys, like girls, dressed in camouflage and pretty well equipped with various kinds weapons and combat support systems, can actually operate with high dynamism and tension, Sergey Shoigu was shown by guards huntsmen in a planned or arranged in honor of the Russian minister ostentatious occupation. On the territory of the regiment there is a special building, arranged inside as an apartment dormitory of the corridor type. As conceived by the leaders of the classes, it was allegedly captured by terrorists, and the gallant huntsmen, rushing into the house, deafeningly firing their machine guns (of course, with blank cartridges), freed up room after room. And then, using special devices, they descended through the manhole into the basement, where they also “soaked” a certain number of “terrorists”.

The roar from idle shots of machine guns in the closed room of the training center was deafening, the cries of the jaegers, who were supposed to stun the invaders, also exceeded all permissible decibels. And the one who previously did not get saving headphones or earplugs, came out of this house a little deaf after the end of the showroom classes. Sergei Shoigu, like the entire Russian delegation, had headphones. The author of these lines frivolously put them on, remembering that in his youth he served in artillery and stood on the ranges for three years while firing near the 122-mm howitzers. Like, and not heard such a rumble. Not that I later regretted my hindsight, but I wouldn’t have started to chuckle a second time. I think that, despite the headphones, our delegation was very impressed with the ostentatious roar.

The Finns showed our minister his articulated tractor for the northern, mossy regions of the tundra. Sergei Shoigu even sat on the site of his driver, drove through the territory. I do not know how he liked the head of the military department. But, in my not very enlightened opinion, our similar tractors are no worse, even more powerful. Just on the eve of his visit to Finland, our head of the military department at the Bronnitsy firing ground got acquainted with the Russian tracked articulated armored personnel carrier DT-3PB, and he had the opportunity to compare our car and the Finnish one. Our similar machines are much better protected from bullets and shrapnel. And the sides of the Finnish looked like flaky plywood. Although they are warm, like a thermos, surely cherish properly.

The Finns and their new modular eight-wheel (4х4) armored personnel carrier AVM (Armored Modular Vehicle) demonstrated the head of the Russian military department. Actively praised him for his dignity, noticing whether it was a joke, or seriously, that it was “not the best, but the best,” as of today, an APC. They said that he could change his ground clearance depending on what ground he went on - in sand, snow or hard ground, that an 105-mm cannon, 120-millimeter mortar, and 7,62 machine guns could be in service with an armored vehicle. millimeter. On the turret of the car, which was shown to the minister, there was already a large-caliber machine gun with an optical and thermal sight. The creators of the car stressed that it was already bought by the Swedes, the Poles, the Slovenes. Apparently, they hoped that we would go the same way. However, when the author of these lines asked the commander of the training center whether the armored personnel carrier had a remote weapon control panel, which has now become a common place in Western armored vehicles, they were told in the presence of the minister that they had already ordered such a system to the company that AVM produced.

It is clear that order and have - the concepts are different. But it is curious that, by advertising their weapons to the Russian minister, the Finns also said that their army also needs re-equipment and modernization. Although the country's budget for these purposes is very small, and that should be reduced by 10%. Nevertheless, they are interested in military-technical cooperation with us. The army of Suomi, which, according to Western sources, including the well-known directory The Military Balance, has thousands of people in the 16 ground forces, has two hundred of our BMP-1 and -2, 250 tracked MT-LB, 350 122- mm D-30 howitzers, as well as Buk-М1 anti-aircraft missile systems, Igla man-portable air defense systems. Now the Finns are holding a tender for the purchase of new MANPADS, where in addition to our “Needle”, the American “Stinger” and the Polish “Thunder” are participating - in fact, our “Needle”, and by the autumn they have to decide what to buy. The chances of Kolomna mechanical engineering design bureau, where the “Needles” are made, as we have hinted, are very high. It is said that the Finns would not have refused from our Su-30MK multifunctional fighters, which should replace the American F / A-18C Hornet that is in service with them. But this is not the neighbor, not tomorrow's choice.

Although, according to experts, the prospects for military and military-technical cooperation are great. But here is the problem.

At the Academy of the General Staff of the Armed Forces of Russia only one Finnish officer is currently studying. There are no ours in their academy. Russian language in Finland is quite popular. We have Finnish - not very. A translator for our minister was taken from the Russian embassy in Helsinki. There is something to think about.
Yes, I almost forgot - about a conversation with cadet Sergey Ilyukhin.

SERVICE IS NECESSARY AND INTERESTING

He came to Finland with his parents at the age of nine. He graduated from school and university here, became an engineer. Then he went to serve in the army. In Suomi, there is a universal military duty, and if you for some reason (not due to illness) evaded it, your future career will be in doubt. Any personnel officer, and even more so in a state institution, will ask: why did you not give a military debt to your homeland? No one will listen to the excuse with all the ensuing consequences.

Serving in the Finnish army, as Sergey assured me, is easy and even interesting. After eight weeks, he had already fired a machine gun, and on the tenth he threw battle grenades. The service life of the Finns is divided into three periods - six months, nine and twelve. To whom how many to serve, define still before a call in analog of our military registration and enlistment office. Depending on the psychophysical qualities of a young man, his education and abilities. Engineer Ilyukhin had a one-year term, and he was sent to junior lieutenant courses before completing his service, and now he will be in reserve as an officer. Retraining every three years.

Another interesting fact is that those who serve six months are paid on 5 euros per day. Ilyukhin and his associates, twelve months, on Euro 11,80. For the year, you can save up to more than three thousand euros. For the first time after the demob a very decent amount.

We talked one-on-one with the cadet. None of his commanders listened to us, and the fact that the soldier was so pleased with his service seemed to me quite remarkable. I really want our fighters to feel before leaving to the reserve that it was not for nothing that they gave or devoted a year of soldier’s life to their country (as you wish).

Ctrl Enter
Noticed oshЫbku Highlight text and press. Ctrl + Enter
We are
What you didn't want to know about England"An undeclared war is going on in Finland against Russian children and mothers"
Military Reviewin Yandex News
Military Reviewin Google News
49 comments
Information
Dear reader, to leave comments on the publication, you must to register.