Information war against Russia - a threat to Syria 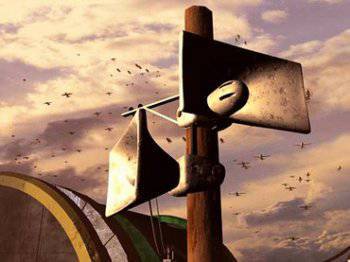 In the age of information technology, the Internet and independent media have become dangerous. weapons in the hands of special structures of different states. Information warfare is constantly being waged against a particular country.


The fact that the media is the fourth branch of government in the state has not been in doubt for a long time, and the governments of some countries have been successfully using the media for many years to justify their actions or to enlist the support of the people in one or another illegal or “foul-smelling” campaign. And also to create public sentiment in another country to achieve their goals. Many websites, television channels, print media and radio stations in all countries work to create public opinion that is beneficial to customers or creators of these information resources.

At present, an information war is being waged against Russia in order to create public opinion, which will further influence the power structures and, as a result, the official position of the Russian Federation in relation to the Syrian conflict. Today, Russia officially supports the Syrian government.

There are websites created on Russian domains (NEW-SYRIA.RU, OKO-PLANET.SU, etc.), which also have their own pages in all popular social networks. And they openly support the Syrian opposition, in whose ranks either mercenaries or militants are fighting, but clearly not the Syrian “peaceful” opposition.

In particular, I would like to talk about the site NEW-SYRIA.RU, which contains misinformation about events in Syria. It can be assumed that this site was specially created for these special purposes. US structures or their allies. The site openly distributes questionable materials that are not true.

So, in early February, a video was posted on the site called "Assad, stop killing children." The description says that the video shows a peaceful demonstration of students, which was shot at by government troops of Bashar al-Assad and one of the students was killed as a result of the shelling. In fact, the video does not record the fact of the use of weapons by government forces. A crowd of young people is shown, shouting anti-government slogans while moving along a city street, after which shots are fired, but no fighters of the government troops are shown, and it’s not at all clear where they shot and where. Then a crowd of people gets into the camera lens, which carries the body of a young man, but where did this crowd come from, and from where does the body of the deceased teenager remain and remains unclear. In this case, a completely opposite scenario is possible: the fighters of the opposition groups opened fire on a peaceful demonstration in order to discredit the government in the eyes of the people of Syria and the world community.

This fact of intentional misrepresentation of information is not the only one on the above mentioned sites. Also, the speeches of representatives of different countries, including Russia, are distorted, phrases are pulled out of context in order to achieve the opposite or other meaning of what was said or written by high-ranking officials.

Other activities of these sites and publications aimed at the dissemination of misinformation related to the combat readiness of Syria and its allies. This is confirmed by the fact that the events related to the Israeli air raids on Syrian objects are misinterpreted in the media.

The Strategy Page publication writes in its article: “Having completed three air strikes on Syria this year, Israel did not suffer any losses, despite the fact that Damascus, as is commonly believed, has modern Russian ground-to-air systems.”

This article aims to create a negative opinion about Russian weapons and create the illusion of the alleged superiority of the United States and its allies over Syria and Russia.

It should be noted that since these sites are located on Russian domains and all information on them is presented in Russian, their main target audience are Russians. This raises questions about how important Russia's support is for the Syrian government.

On the other hand, support for Syria is also strategically important for Russia itself, since the coming to power of opposition forces may mean, in the future, the presence of the American contingent in Syria, which in turn is a direct threat to the Russian Federation.

Ctrl Enter
Noticed oshЫbku Highlight text and press. Ctrl + Enter
We are
List of destroyed the largest and most high-tech enterprisesMilitary reform as an integral part of the security concept of the Russian Federation: Systematic dynamic assessment
Military Reviewin Yandex News
Military Reviewin Google News
15 comments
Information
Dear reader, to leave comments on the publication, you must to register.