Baltops-2013: against whom are we learning? 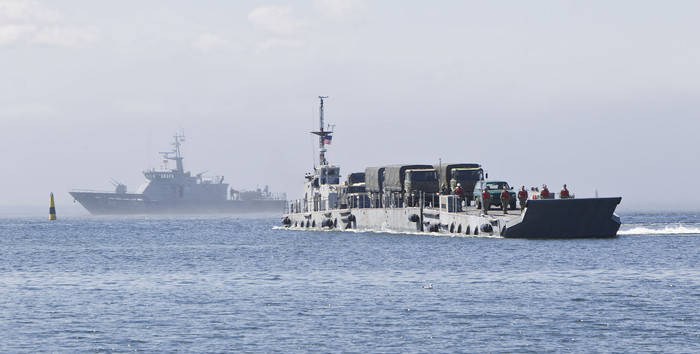 Balts and Poles are preparing for the largest NATO naval military exercises called Baltops 2013. They will go from 7 to 10 June in the Baltic Sea. According to LETA, in these large-scale exercises will participate 35 warships from thirteen countries. On these days and in the next few days, Latvian residents and tourists will be able to look at warships: Latvian, Swedish, Finnish, Danish.

Polish resource gdyniaturystyczna.pl reports nearly 30 ships from twelve countries and recalls that the Baltops naval exercises have been held in the Baltic Sea since 1972.

Initially, these were exercises in which NATO forces participated. In 1993, new participants were invited from the states of the former Eastern bloc, including Poland. Since then, these maneuvers have been organized under the Partnership for Peace program.

The exercise scenario this year is built on a fictional situation, and the action takes place in fictional countries. There was a local crisis at sea and on land. The situation led to the adoption of a resolution by the United Nations. Its result should be the restoration of peace and stability in the region. Around the disputed territories supposedly created a security zone, inaccessible for shipping. UN forces are authorized to take appropriate measures, including to prevent access by terrorists, as well as to carry out actions to enforce peace.

Alexander Novik ("Russian peacemaker") indicates that the Baltops-2013 exercises will involve 32 surface ships, two submarines, 20 aircraft and tactical and anti-submarine helicopters aviation NATO countries. The observer believes that since during the maneuvers, under the pretext of solving the tasks of preparing for peacekeeping, it is planned to actually work out the elements of the classical naval operation in the vicinity of Russian borders, this objectively reduces the security of Russia on its western borders. According to experts, NATO exercises, as a rule, are united by a single idea of ​​creating an alliance strike force, transferring it to the Baltic countries by sea and deploying them to designated areas, closer to Russian borders.

The author asks a question: what kind of peacekeeping operation is in the Baltic? Who can it be directed against?

Well, in the west it is directly said: against a fictional opponent from a fictional country. And the situation is also fictional. It is not only the UN that is invented, which, like in the good old days, will dance to the tune of NATO, pointing at opponents that prevent blood from building all over the world to build peace on the globe.

Comrade Novik also recalls that the Baltops maneuvers will be held simultaneously with the NATO exercise Saber Strike 2013, which will be a logical continuation of the verification of the organization of the deployment of the reinforcement forces of the NATO armed forces by sea and their combat use on the territory of the Baltic States begun in 2012. More than 1 thousand 200 people from the US, Lithuanian, Latvian, Estonian, Finnish forces, the German-Danish-Polish Army Rapid Response Corps and NATO experts will take part in these exercises, the author of the material writes.

Let us clarify the numbers.

The Saber strike 2013 (Saber Strike) exercise, which began on June 3 in the Baltic countries (end date - 14 June), involves 1800 troops from Estonia, Latvia, Lithuania, Poland, the USA, the United Kingdom, the Northeast NATO Corps. as well as Finland, which is not a member of NATO. The purpose of the exercise declared the preparation of parts for interaction in joint operations, transfers Interfax.

The main headquarters of the exercise is located in Lithuania. In Latvia (at the Adazhi range) it is planned to work out the interaction of land units and subunits. In Estonia, NATO provides exercises for NATO aircraft, as well as military personnel of the Northeast NATO Corps.

Rosbalt reminds that on May 24, two Polish amphibious assault ships with military equipment and equipment arrived at the South Port of Paldiski (northwestern Estonia). On board these ships - about 100 tons of military cargo for training. Headquarters equipment belongs to the command of the multinational NATO Corps Northeast - Multinational Corps Northeast (MNC NE), located in Szczecin (Poland). It is also reported that for the exercises, US Air Force units were involved in A-10 fighter jets and with KC-135 tanker aircraft.

According to Lieutenant Colonel Tiit Palyak, the person responsible for planning the Saber Strike exercises, the practical part of the exercises will be held in Latvia. The military units of different countries will not meet face to face very often: the fact is that the exercises will mostly be based on computer simulations.

“The technique has reached the point that simulation exercises allow headquarters to be located at different points, while the battlefield is one - virtual,” explains Palac.

Alexander Novik ("Russian peacemaker") believes that during the Saber Strike 2013 and Baltops 2013 exercises, elements of the operation at the European theater of action with the transfer of US and NATO troops to the territory of the Baltic countries and their deployment in the designated areas near the Russian borders will be worked out. Assessing the composition of participants and the target orientation of these exercises, the analyst assumes that the NATO leadership, in the event of a worsening of the situation, is considering the Baltic Sea zone as a region of the formation of a powerful assault force for action in the east.

What, strictly speaking, obviously and does not require special arguments: just look at the map.