LGBT terror and the decline of mankind 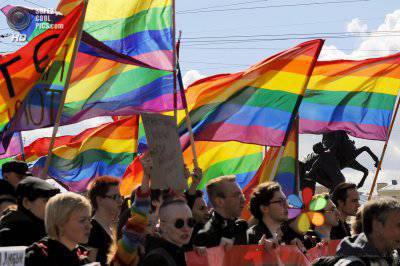 Before proceeding directly to the consideration of the topic stated in the title, I consider it necessary to once again draw attention to its full eligibility on the site.


In no case should the “Military Review” be led by crafty trolls, who systematically call upon their indignant comments to confine themselves only to the characteristics of individual types of weapons and military equipment. As any technical product is only a tool in the hands of man. It can be used both for the benefit and to the detriment of society. For example, with the help of an ordinary ax, you can build the eighth wonder of the world, like Kizham, or kill a person.

Therefore, considering the issues of military construction, along with the IWT, tactics and strategy of their use, it is imperative and first of all it is necessary to determine: against whom or in defense of which the created military potential should be used. In other words, we must constantly monitor: on the side of what forces we are or can be.

At the same time it is necessary to understand that recently informational (ideological) weapon It proved to be more effective than traditional material, including nuclear. The last decades in the international arena in the process of confrontation without the direct use of armed violence began to fall apart states and their coalitions. The emergence of crisis phenomena, internal instability and the disappearance of entire countries from the political map of the world is largely connected with the way of life of people, the state of their consciousness and culture.

Against this background, we observe that a new wave of the so-called “sexual revolution” has gained strength. Any revolution is a war to destroy the established society. And let us not be misled by the fact that this war has not been officially declared anywhere else. Gay parades, already held in many countries, show that there are winners who arrange these parades, and, therefore, there is war.

Tracing history The favorites of modern democracy - “sexual minorities”, can be divided into three distinct periods of their existence. The first is the original one, when all nations considered sodomy to be the greatest deadly sin, and the penalty for this sin in this world was execution or exile. The times then were harsh, therefore the punishments existed fair.

The second period, which passed literally before our eyes, is when they no longer considered sin to be a sin, but began to be called a disease. But instead of treating the sick, they forced the healthy to put up with the neighborhood of these lepers, who used the softness of society in order to spread their disease among others, especially the younger generations.

And, finally, the apotheosis of this tragedy is the thriving third period nowadays. Sodomites, renamed sexual minorities, lead to power in the leading Western states and they begin to dictate their laws and norms of behavior of the healthy part of the population. Any dissatisfaction with the new government is consistently suppressed with the help of the police repressive apparatus, based on the creative legislation in these countries. The police are everywhere guarding gay parade participants, demonstrators are grabbed by dozens of people against this dirt and dragged to the police stations.

Totalitarian gay regimes brought to power instantly organize the merciless pressure of a healthy part of the population, changing the laws in their own interests and carrying out further infection with the sodomy of normal citizens. (diseases, as it is known, are of physical nature like a plague, transmitted by airborne droplets by means of bacilli, and mental ones, transmitted verbally by visual means by means of “independent media”). In their terror, sodomites make special emphasis on children, trying to instill in them views on distortions as a norm, issuing not only laws for this, but also whole new literature, where parents of middle or third kind are present instead of mom and dad.
Conducting a merciless, aggressive policy of destroying the family, sodomites, along with their masters, have already created on a global scale juvenile justice, through which tens and hundreds of thousands of children are removed from their families, depriving them of maternal and paternal caress.
Considering this all-human catastrophe under the name of the sex revolution, it is impossible not to notice that its leaders are individuals who are not independent and who do not possess either powerful financial or other resources. However, they win in one country after another. It is clear that someone finances them, organizes and uses as a ram for the destruction and destruction of human civilization.

Although Darwin’s theory of man’s descent from a monkey has been unpopular lately, all religions of the world hold to a certain extent that there are two components in man: spiritual (divine) and material (animal). The LGBT revolution unambiguously lowers humanity into an animal state. In the world of the domination of animal instincts, the domination of the insatiable womb. What inevitably leads all of humanity to its decline: degradation and extinction.

In order to call for compassion, sodomites scream about the persecution they suffered from the Nazis in Germany. No need to be kept on these moans.

SODOMITES AND NAZIS ARE ONE IN GENERAL PURPOSE: DESTROYING HUMANITY. DIFFERENT ONLY IN THE APPLICABLE METHODS. NAZI WANTEDS TO DESTROY HUMANITY WITH THE HELP OF GAS CHAMBERS AND CREMATORIES, AND SEX-MINORITIES WITH THE HELP OF SODOMY.

Ctrl Enter
Noticed oshЫbku Highlight text and press. Ctrl + Enter
We are
Why rebuild repsMilitary reform as an integral part of the security concept of the Russian Federation: Systematic dynamic assessment
Military Reviewin Yandex News
Military Reviewin Google News
104 comments
Information
Dear reader, to leave comments on the publication, you must to register.