Bradley Manning: "Live in peace with yourself" 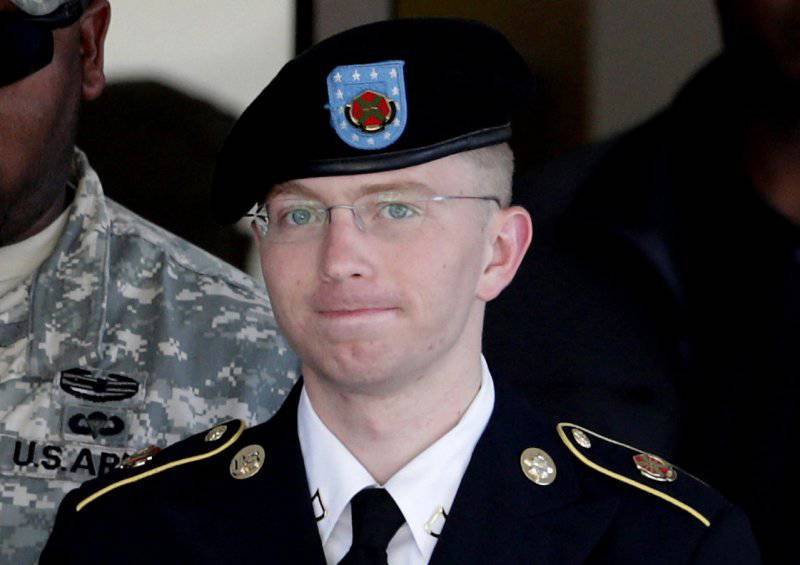 On June 3, Private First Class Bradley Manning, the WikiLeaks main informant, appeared before a military court in Maryland. According to the prosecution, in 2009-2010. Manning provided thousands of copies of diplomatic dispatches and 250 with thousands of military reports on the situation in Afghanistan and Iraq to the named site 500. "BBC" recalls that he pleaded guilty to the 10 of the 22 counts. Meanwhile, the private still rejects the most terrible point called "Aiding the enemy." Pacifists and supporters of Manning and WikiLeaks believe that the soldier is being punished for freedom of speech: after all, he exposed the crimes of the American military. The White House believes that he betrayed the interests of the state. Both are absolutely true.

“So who is he - Bradley Manning? - are wondering on the channel "Euronews". - A vulnerable, unbalanced young man who is not responsible for his actions, as described by him alone, or, on the contrary, he who understood well what he was doing and what consequences this could have, but wanted, in his own words, to provoke a debate about the actions of the American army and the foreign policy of their country to live in peace with themselves? "

The motivation of the soldier was as follows: he handed over a CD of documents for publication on the site because American citizens, he believed, have every right to know about the arbitrariness of the American military in Iraq and Afghanistan.

TV channel correspondent "RT" Marina Portnaya reports that, according to the materials of the prosecution, even Osama bin Laden used the data transmitted by Manning to the WikiLeaks website. As for the founder of the site, Julian Assange, who now lives at the Ecuadorian embassy in the UK, he noted that the emergence of a precedent with a trial and subsequent punishment would entail the threat of the death penalty to any soldier, and journalists can easily be enrolled as “accomplices of the enemy”.

Hundreds of Americans held a demonstration in support of Manning. At the US military base Fort Meade, where the trial is being held, on June 2 gathered from 450 to 700 demonstrators. They chanted the slogan “Freedom to Bradley Manning,” and held in their hands posters with the words “My hero” and “Americans have the right to know.” The next day the action continued.

There are two main versions of what prompted Manning to publish classified material.

According to the RIA News" With reference to CNN, Manning’s lawyer, David Coombs, said that his client wanted to fight in Iraq, but his views on the war changed one incident: a car full of peaceful Iraqi citizens exploded on a land mine, giving way to a convoy of US military. After this explosion, he began to collect classified information, believing that it would be better if it became public.

Prosecutor Joe Morrow, however, believes that ordinary vanity is to blame for everything: “He used the service in the army to achieve fame, which he strenuously sought.”

A shift in Manning’s mind occurred during a mission to Iraq in 2010. In those days he served as an intelligence analyst. An ordinary first-class soldier watched a video stored in a US military database and saw two pilots shoot civilians. Among them were children and two reporters from Reuters.

In February, 2013, at the pre-trial meeting, Manning read out his own statement, in which he noted that he was most worried about the loss of innocent civilians. He was shocked by the jokes exchanged by American military pilots.

They called for the mortally wounded civilian, who was trying to crawl to the shelter, "to take into weaponSo they can shoot him. When the pilots realized that they had killed the children by shooting the van whose driver was trying to save the reporters, they said: “Well, you are to blame yourself, you shouldn’t have to drag the children into the battle.”

In accordance with the US law on free access to information, Reuters Agency sent a request to show the video to the US Central Command. But they answered from there: “Perhaps this video no longer exists.” Another representative of the US Army said that, in the opinion of the Central Command, the video was not genuine.

It was then that Private Manning felt the need to share what he knows with other people, and do it through WikiLeaks. And shared, copying on mini-disks everything that had a “secret” neck.

Now, if Manning is found guilty under an article on the disclosure of state secrets, he can “shine” a period of twenty years. But this is only one of the articles in which he himself pleaded guilty. If he is "shot down" from all the 22 points of the prosecution and accused of maliciously complicity with the enemies of the state, he will sit for life. He is not executed in the electric chair: the procurator has already stated that she will not demand this. (By the way, it is not surprising: in this bustling trial, the death penalty would have made an extremely unpleasant impression on the world community). The Western press writes that Manning’s defenders in court cannot prove his innocence through “naivety,” “good intentions,” “ideals,” “public good,” and other vague arguments.

Evgeny Aronov ("Radio Liberty") cites the opinion of Tara Gelfman, a professor of law at the University of New York in Syracuse, who believes that such arguments will not affect the court decision:

“It is highly doubtful, since the legal proceedings are not based on ideological arguments, but only on the law and on concrete facts. In practice, it will be extremely difficult for lawyers to prove that Manning did not assist the enemy and did it absolutely consciously. According to the law, he is guilty of aiding, even if the information "merged" with him did not cause actual damage to America, but only could this do. Moreover, the defendant might not have known how this information will be used against the United States; to prove the guilt it is enough to show that he could not help but understand that in some way it could be used to the detriment of the country he served. ”

Nevertheless, the professor believes, ideological arguments remain in the arsenal of remedies. After all, Manning wanted to open his eyes to society on what is happening in Iraq and Afghanistan, so that it would put pressure on the government: the vicious foreign policy must be stopped.

There are other reasons, says Tara Gelfman. Manning was not fully aware of what he was doing: he suffered from bouts of anxiety and depression. Finally, he was gay, which means he was overwhelmed by the need to hide his sexual orientation from his superiors and his comrades. The professor believes that he was not quite sane.

Tara Gelfman recognizes all these arguments as shaky. But nothing better, she said, for protection, probably not.

Anna Malrayn in her article приводит opinion on the judicial argumentation in the Manning case of the former head of the military legal service of the US Army Richard Rosen, now the director of the Center for Military Law and Politics at the Faculty of Law of the University of Texas.

In particular, he said: “When they give you permission and trust, you must follow the rules for the security of documents, and it’s not up to you to decide what to make public. It seems to me that it is possible to be the whistleblower in the army. The question is how to do it. ” After all, the military takes the oath. Manning could write to the congressman and say, "Look at such and such information."

However, under the article “Assisting the enemy” (punishment is the death penalty) B. Manning will be difficult to blame. It will be difficult for the state to prove it, says Mr. Rosen. “Manning should have known that by merging this information, he helps the enemy. It is not enough that he made the information public ..., thinking that it would help people. ”

Alexander Khristenko ("Vesti") quotes in his report the words of one of the protesters at Fort Mead: “He is a hero because he defended the American Constitution by courageously speaking out against our government, which kills people all over the world with drones UAVs. The Constitution does not say a word about the fact that the US president has the right to issue such orders. ”

So, not only before the American society, but also before the whole world, stood - far from the first time - a question that is difficult to give a definite answer: the enemy Manning, or still a fighter for freedom and against the vicious foreign policy of that state, which is more two centuries advocating all kinds of rights and freedoms?

However, unambiguous answers just enough. Those who call Manning an enemy, repelled by the fact that he betrayed the interests of the state, violated the military oath and in general was a homosexual and vain guy, counting on fame. And even life-threatening imprisonment does not change their opinions. Those who consider Bradley a pacifist and whistleblower, a hero and a fighter, argue their position with the killings that the American military machine is doing all over the world - in the name of dubious "democratic values". If Leo Tolstoy were alive today, he would fully defend Manning and write an article against the state. Be alive, Ivan Ilyin, he was ardently advocated for the punishment of the private and for the state.

The military court at Fort Mide will certainly condemn Manning. The defense has too few arguments to cover the charges of the prosecutor's office as trump cards.

In conclusion, it should be noted that the Manning case could not but affect the fall of confidence in the world to the most diverse US institutions - to the special services, the army, the legislature. Brad Manning exposed the torture administration of Bush Jr., and exposed the military cynicism that was going on under Obama. Private vanity is exaggerated: he still hid his cooperation with WikiLeaks, and if it were not for his hacker friend who had handed him over to the authorities, it might have been continued.

Observed and commented on Oleg Chuvakin
- especially for topwar.ru
Ctrl Enter
Noticed oshЫbku Highlight text and press. Ctrl + Enter
We are
Results of the week. “A terrible holiday spirit was hovering in the air.”Results of the week. "Of course, he is guilty, but he ... is not guilty ..."
Military Reviewin Yandex News
Military Reviewin Google News
78 comments
Information
Dear reader, to leave comments on the publication, you must to register.