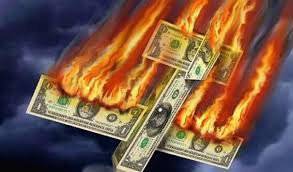 The streets are now much darker, since the municipal government rarely has the money to cover them. National parks have been closed for several years in a row. Some of them are already divided and sold to the highest bidder. Reports of dilapidated or even collapsing bridges have become commonplace. The air, in one city after another, hangs dirty and heavy (and the number of cases of asthma and other pulmonary diseases in children took off), since funding that would allow to observe the standards of cleanliness of the atmosphere set by the Environmental Protection Agency is in the distant past. Public education is curtailed to a minimum, which makes good schools a luxury, and, according to the Ministry of Education, two out of every five students will not finish high school.


This is 2023 a year - and this is America through 10 years after a comprehensive budget cuts, the so-called sequestering, first began to operate. It went on for 10 years, without making exceptions for effective programs that are vital to the economic health of America, which already lacked funding, such as vocational training and repair of infrastructure facilities. It could not be otherwise.

If you go back to 2013 - at the time when the sequestration began to operate - no one knew what its influence would be, although almost everyone, across the political spectrum, agreed that it would be bad. It so happened that the first signs of the collapse, which a decade later turned the United States into a third world country, could be found surprisingly quickly, only three months after the start of the cuts. In this short space, several government agencies, such as the Federal Office of Civil aviation (FAA), after the scandal due to flight delays, demanded - and received - a special exception. Naturally, the Ministry of Defense, with its pathetic $ 568 billion to the wind in its 2013 budget, also joined the elite list. On the other hand, the pressing costs of education, environmental protection and scientific research were not spared, and in many communities the effect of this was felt surprisingly soon.

Sustainable public investment in the previous century was the key to US prosperity. Then they were considered the main part of the "social contract", as well as the elementary truth of the economy. As almost everyone was aware of in those days, citizens pay taxes in order to finance worthy initiatives that could not be effectively and adequately satisfied by the private sector. An example is roads and research. In the years after World War II, the country invested huge sums of money into its interstate highways and was widely recognized as the best education system in the world, and research in well-funded government laboratories led to inventions such as the Internet. The resulting world-class infrastructure, an educated workforce, and a technological revolution fed a healthy private sector.

However, in the early years of the 21 century, a series of fabricated arguments in favor of "austerity" that had been wound up for decades, captured the imagination of the nation. In 2011-2012, Congress, which seemed to have little else to do, made trillions of dollars into what was later called "deficit reduction."

Sequestering was a strange and particular case of this particular disease. These comprehensive abbreviations, approved in August 2011 of the year and launched on 2 on January 2013 of the year, meant a cloud hanging over Congress. The sequestration was not intended to put it into action, but only to make the legislators listen to the voice of reason - to work out a less daunting plan to reduce the deficit by completely arbitrary 1.2 trillion. dollars for ten years. As it is now known, they never came to their senses, and the sequestration did indeed take effect. Then, although Congress could cancel cuts at any time, the country never turned back.

This does not mean that cuts in federal spending at such levels in the 2013 year were devastating, although an already weakened economy would be harmed by any cuts. Rather, the sequestration turned out to be completely corrosive from the very beginning, since all government spending — from research grants for renewable energy and disadvantaged public schools to HIV tests — should have been cut equally as if it were all fat to be pumped off (cut off). The elimination of even the monitoring systems of possible natural disasters, such as river floods and volcanological services in earthquake-prone areas, has begun. Over time, the reductions became huge: $ 85 in the first year and $ 110 billion for each succeeding, totaling more than $ 1 trillion. cuts in ten years, to top it to other cuts that have already occurred.

Since the lawmakers approved sequestration as a law, they have had more than a year to think again. And yet they did not lift a finger to work out an alternative plan and did not even bother to notice the signs of the coming chaos until a few weeks left before the expiration date. Then they gave themselves a couple more months - before March 1 of the year 2013 - to come to an agreement, which they never did. All this, of course, ancient историяbut even a decade later this annals of stupidity is worth analyzing.

If you remember, they tweeted on Twitter when Rome burned. House Speaker John Beyner, for example, sent out dozens of tweets to say that the Democrats are responsible: “The president suggested a sequestration, had 18 months to set priorities in cuts, and did nothing,” he wrote, as a rule, although no less than the rule - did nothing. For his part, the leader of the Senate majority, Harry Reid, wrote in a return tweet: "It is not too late to prevent threatening cuts in the sequestration, for which the overwhelming majority of Republicans voted." And it has become a model for a ten-year American political impasse, which has not been overcome to this day.

The beginning of ruin

The March 1 day came ... and passed, so the budget ax began to descend.
At first, things didn't seem so bad. Yes, the cuts were not as ubiquitous as expected.

The meat industry, for example, protested because the dismissal of sanitary inspectors slowed down its production lines, and therefore Congress patched the problem, and sanitary inspectors spared. But besides meat producers, there was a feeling that, perhaps, cuts in the end were not so bad. The cuts had to be carefully and thoroughly, based on the formula, in order to get the desired result - $ 85 billion cuts taken from the ceiling in the 2013 year — and no one knew exactly what could happen to each individual program. In April, more than a month after the start of cuts, the White House unveiled a presidential draft budget for the next year, an annual milestone document, usually containing detailed information on federal expenditures of the current year. But on thousands of pages of documents and tables, the new budget ignored the sequestration, and thus reported the meaningless 2013 figures of the year, because even the White House could not say exactly what impact these cuts would have on programs and public investment throughout the country.

It so happened that it did not take long to see results. The first circles actually began to spread rather quickly. Having lost some of the government funding, cancer clinics in New Mexico and Connecticut stopped accepting patients. In Kentucky, Oregon and Montana, shelters for victims of domestic violence have reduced activities. In New York, Maryland and Alabama, state lawyers were dismissed, which restricted access to justice for low-income people.

In Illinois and Minnesota, public school teachers were fired. In Florida, Michigan and Mississippi, “Head Start” (Educational and medical program to help children from low-income, mentally retarded, and disabled people funded by the Administration for Children, Youth, and Families; exists with 1965 - approx. Transl.) - reduced the school year, while in Kansas and Indiana some low-income children simply lost access to this educational program. In Alaska, a drug treatment clinic was closed. Across the country, the Meals on Weels program has cut 4 a million meals for needy old people.

It was only when the FAA extended layoffs to its air traffic controllers that public anger began to threaten to reach its boiling point. Long queues and flight delays at airports followed, and people became enraged. And not anyhow, but those who had access to members of Congress. In Washington, which usually baffled the most usual procedure, lawmakers took a dizzying pace, spending only five days to enact a special law to solve this problem. In order to avoid the dismissal of air traffic controllers and reduce the waiting time for air passengers, they allowed the FAA to spend funds intended for the repair, reconstruction and modernization of airports.

Flights for some time were left alone - at least until the runways collapse and collapse. (Of course, remember the 2019 scandal of the year at Cincinnati International Airport, when a bright young candidate for the Senate met her demise in a tragic incident during the landing).

And then, of course, he asked for the exception and the Pentagon. We are talking about the military monster of the planet Earth, which in 2013 on a global scale accounted for 40% of military expenditures, which exceeds the expenditures of its closest 10 military rivals combined. He also wanted a special exemption from some of the cuts falling on his share.

Sanitary inspectors from the meat processing industry, the FAA and the Ministry of Defense enjoyed special treatment, but the rest of the nation, as history textbooks recall, was not so lucky. Children from middle-class and low-income families saw even more scarce resources for schools that closed the window of opportunity. Young people, the elderly and the infirm have found themselves in front of endangered access to basic resources, such as medical care or just a hot lunch. Federal grants to the states have dried up, and in the state budgets there is less money for local priority needs - from the police to modest street lighting.

And remember that just at the time when the budget cuts began, the concentration of carbon dioxide in the atmosphere overcame the threshold of 400 particles per million. (Climatologists have long warned that for human safety, this concentration must be kept at a level below 350). Unfortunately, as with the breakthrough research that led to the emergence of the Internet, doing big things requires money, and the long-term effects of reducing environmental costs, extensive research and basic infrastructure meant that the US government could do little do something to prevent extreme weather events, which in 2023, have become such a part of our world and our lives.

Looking back from a country that is currently in a state of permanent crisis, it is clear that the Rubicon was moved in 2013 year. Then there was still a chance to reject comprehensive budget cuts, which would undermine national construction based on solid public investment and joint prosperity. At that crossroads, some struggled against austerity. Losing that battle, others defended a smarter approach: to close tax holes, to increase new revenues, or to reduce waste in health care, or to impose a tax on carbon dioxide emissions, or to reduce unreasonable expenses at the Pentagon. But too few Americans - besides having too little influence - have spoken, - and Washington has not heard.

The rest of this story, as you well know, is history.