28 May 2013
22
Metis ATGM 9K115 index (according to NATO codification - AT-7 Saxhorn) is a Soviet / Russian portable anti-tank missile system belonging to the 2 generation. It was adopted by the Soviet army in 1978 year. The complex is a means of anti-tank defense of the company level and has semi-automatic command guidance through the wires. The ATGM was created by the Tula Instrument Design Bureau. This anti-tank complex is intended for the destruction of visually visible fixed and mobile targets, with flank speeds up to 60 km / h, enemy armored vehicles and their firing points. In addition, "Metis" can be used for shooting at low-hanging enemy helicopters.


For the most part of the Soviet-made 1980 s that were in service with and in production of anti-tank guided missiles, the task of increasing armor penetration could be solved with the help of modernization (mainly related to the refinement of combat units and interacting parts of a guided anti-tank missile). Among all the most modern at that time controlled anti-tank missiles, Metis was the most worrying thing for designers. At the same time, the designers of the well-known KBP from the city of Tula managed to develop an 2-generation ATGM with a record low mass. But for the same reason, the reserves for further increasing the combat capabilities of this missile were minimal. It is for this reason that the work on the modernization of the Metis complex in terms of the ATGM resembled the creation of a long-range Tu-22M bomber as the modernization of the Tu-22. In addition to its name, a new model of controlled anti-tank weapons practically inherited nothing from its predecessor.

However, this did not indicate the development of a new complex - the very ideology of Metis itself envisaged the cheapening and ultimate simplification of the missile with the help of a certain complexity of reusable ground-based facilities. For this reason, the concept of modernizing ATGMs provided for a very high level of continuity in ground-based facilities in order to achieve the possibility of using the regular missile of the first Metis 9М115 complex and the upgraded Metis-M 9М131 with the PU. At the same time, the modern requirements of time were also felt in the ground equipment, which provided for the use of the Mulat-115 1PN86BVI thermal sight with a mass of 5,5 kg. This sight had a range of detection of armored targets at a distance of 3,2 km, which ensured the launch of an anti-tank missile even at night at a maximum range of destruction. 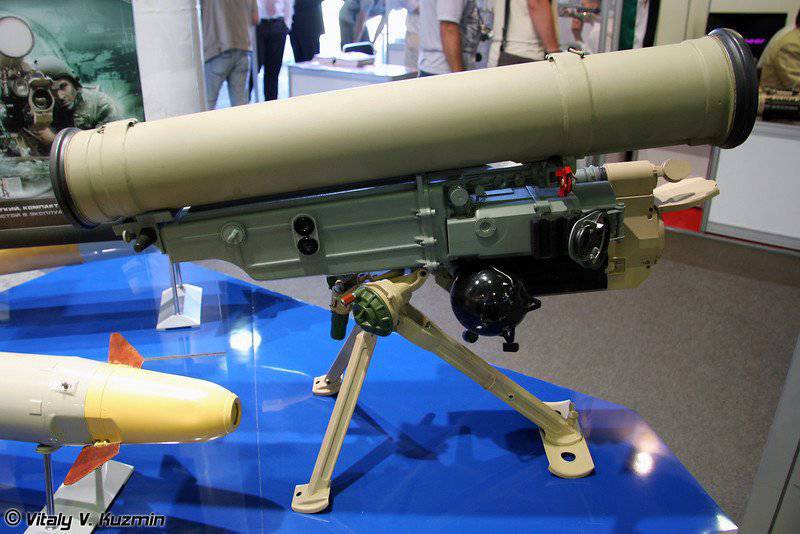 Despite the fact that virtually all elements of the 9М131 rocket are structurally new products, their overall design scheme is an enlarged model of the original rocket model. The only exception is a tandem warhead with a newly introduced precharge. The developers of this complex proceeded from the fact that the Metis-M and the new Kornet complex will replace the previously developed Metis, Fagot and Konkurs in the weapons system of a more distant future. For this reason, the Metis-M ATGM system also implemented an increase in the firing range (1,5 times) to 1,5 km. with a minimum range of fire - 80 meters. But the main advantage of the ATGM 9М131 over its predecessor (9М115) was the ability to destroy armored vehicles with armor thickness up to 900 mm.

It is quite natural that such a significant increase in the tactical and technical characteristics of the complex was achieved due to an increase in the dimensions and mass of the rocket. The length of the transport and launch container has grown to 980 mm. One soldier could only carry 2 TPK with new missiles in the number 2 of 28 kg. instead of the old-style 3-ATGM. The weight of the pack # 1, which contained the launcher directly from the TPC, was 25,1 kg. When replacing on the issue number XXUMX TPK with a rocket on a thermal imager, its mass was reduced to 1 kg. The operation of ATGN was ensured by the use of 18,5B9M and 81B9M test equipment.

The new complex was designated the Metis-M GRAU index - 9K115-2 (according to NATO codification AT-13 Saxhorn). This ATGM was already a Russian development, which was designed to combat modern and promising models of armored vehicles, which can be equipped with dynamic protection, as well as fortifications and enemy manpower at any time of the day or night, including in adverse weather conditions. The Metis-M ATGM was developed at the Tula city KBP and adopted by the Russian army in 1992. 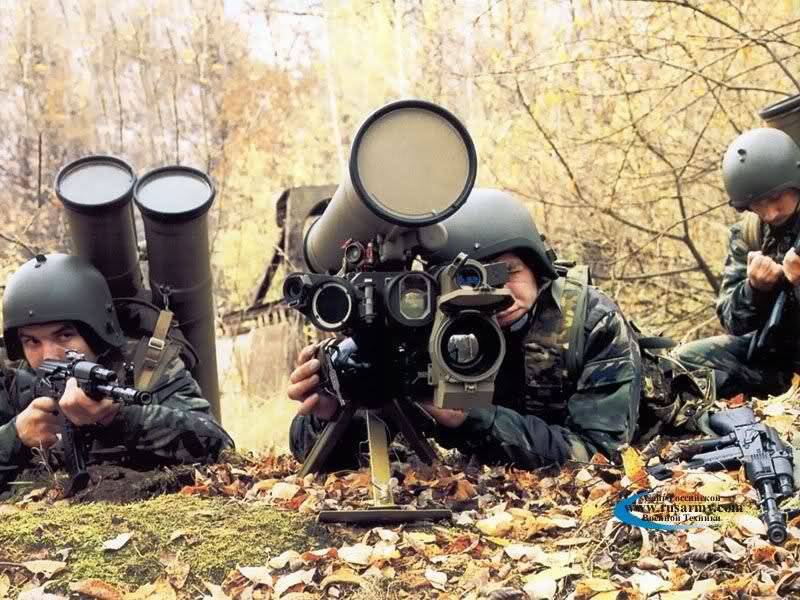 Additionally placed on the tripod PU can be equipped with a thermal imaging sight “Mulat-115” (1PN86BVI) weight 5,5 kg. This sight allows you to detect a target at a range of up to 3,2 km and identify it at a distance of up to 1,6 km., Which allows you to fire at night at maximum range. The guided anti-tank missiles are launched using the starting engine, after which the marching solid propellant rocket is launched.

"Metis-M" was adopted by the Russian army as a replacement for the Mestis first-generation anti-tank systems, as well as earlier systems such as Fagot and Konkurs. One of the most important features of the new complex was the use of missiles equipped with a tandem-shaped cumulative warhead, as well as missiles equipped with a warhead of a volumetric explosion or, as they are also called, rockets with a thermobaric warhead. The same missiles are used in the famous Bumblebee rocket jet-thrower.

Along with its main purpose - using as a portable infantry anti-tank complex, Metis-M can also be used as guided weapons for BMD and BMP, and in some cases used for modernization work, when using the Kornet ATGM with a fundamentally more advanced system Laser beam control is expensive and impractical. Shooting from ATGM "Metis-M" can be carried out both from prepared and not from prepared positions. The calculation can fire from a trench standing, from a prone position, and also from a shoulder. It is also possible to fire directly from buildings, but in this case the condition must be fulfilled according to which the launcher must have at least 2 meters of free space. 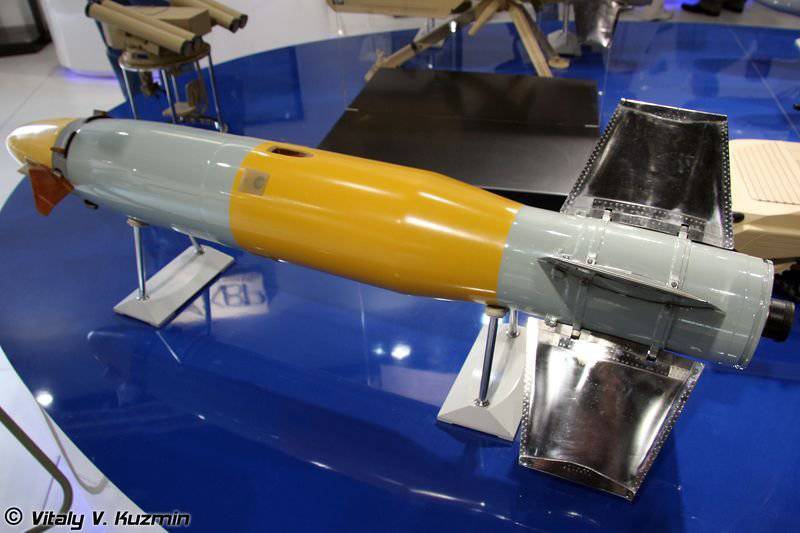 The wings of the new ATGM 9М131 are made of thin sheets of steel, their opening occurs after the launch of the rocket under the action of its own elastic forces. As in the 9М115 ATGM “Metis” complex, the implemented technical solutions, in particular the location of the tracer at the ending of one of the 3-x wing consoles, eliminates the use of gyro instruments, electronic units and onboard batteries. During the flight of the anti-tank missile, the tracer moves in a spiral, while the ground equipment of the complex receives information about the angular position of the missile and makes adjustments to the commands issued via the wireline to the BGM controls.

The 9М131 rocket is equipped with a new, more powerful tandem-shaped cumulative warhead that can confidently fight both modern enemy armored vehicles and advanced military equipment. For the destruction of manpower, fortifications and various types of shelters, thermobaric ammunition with a warhead weighing 4,95 kg has been successfully used.

Tactical and technical characteristics of the PTRC "Metis-M» 9K115-2:

Ctrl Enter
Noticed a mistake Highlight text and press. Ctrl + Enter
We are
Soviet infantry anti-tank weapons (part 3)An-12 in Afghanistan
22 comments
Information
Dear reader, to leave comments on the publication, you must to register.