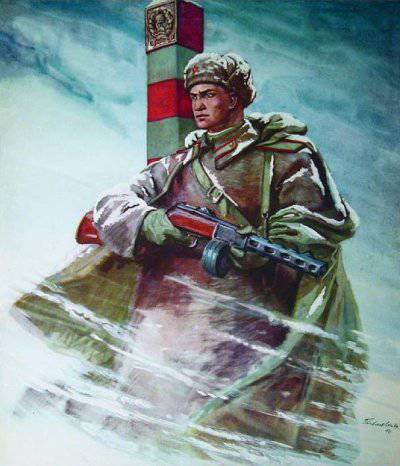 History domestic border service begins with the formation of Russian statehood and the determination of its territorial limits. The need to defend their territory from the raids of militant nomadic tribes forced the Russians to build guard posts and fortresses on distant approaches to large cities, which gradually turned into cities. As Russian lands were consolidated around Moscow in the 2 of the 14th century, the first guard detachments and stanitsa began to work to defend against the raids on Russian territory in the southern and south-eastern outskirts of the Moscow principality, which were transformed into cross-border lines and lines.
The first official document regulating the rights and duties of the guards and the procedure for the protection of state boundaries, was the "Code of the stanitsa service" 1571 of the year. Since then, border security has become a separate type of military service. Almost through 200 in years, in 1754, with the increase in the volume of trade with foreign countries in Russia, border customs are created, the staff of which were dragoon regiments scattered around border outposts, as well as customs hired volunteers. In October 1782, a “customs chain and guard” service was established in the country, with the task of directly guarding the borders and carrying out border controls.
In 1827, with the adoption of the “Provision on the arrangement of border customs guards,” the border service was actually subordinated to the foreign trade department of the Ministry of Finance, and was partially separated from this subordination only in 1893. It was then that the Separate Border Guard Corps (OCPS) was formed, whose main tasks were the fight against smuggling and illegal border crossing. With the beginning of the First World War, units of the OCPS finally left the structure of the Ministry of Finance and were reassigned to the military command and joined the armies.
With the collapse of the country in 1918, the OKPS was liquidated, and in March, 1918, again under the People's Commissariat of Finance, which was barely created by the RSFSR, was organized by the General Directorate of Border Guard. In November 1920, the tasks of guarding the borders of the RSFSR were assigned to the Special Department of the Cheka, and with the end of the Civil War in September 1922, they were transferred to the OGPU. Since July 1934, the leadership of the frontier troops has come under the authority of the Main Directorate of Border and Internal Guard of the NKVD. After the war, the border guards were subordinated to the USSR Ministry of State Security, and from 1953, they were transferred to the Ministry of Internal Affairs. The organizational and managerial evolution of the border troops received its logical conclusion in 1957, when the Headquarters of the Border Troops of the KGB of the USSR was formed in the country. After the 1991 catastrophe, the management of the border troops was abolished, and the Committee for the Protection of the State Border was formed instead. In October, the Border Guards 1992 were incorporated into the newly formed Ministry of Security. After a series of new organizational perturbations in December 1994, the Federal Border Service of the Russian Federation was formed, and since 2003 - the structural unit of the FSB of Russia.
The tasks of the border guards include providing comprehensive protection of the state border at sea and on land; anti-smuggling, illegal migration and trafficking organization weapons, drugs, as well as the suppression of the activities of gangs in the border area and much more. To date, the frontiers of Russia guard about 200 thousands of border guards.
According to a good tradition, on the Day of the Border Guard, all those who served in the border troops, put on uniforms and gather in public places, where they celebrate their holiday cheerfully and noisily. On the Day of the Border Guard in cities where the offices of border districts and groups of border troops are located, it is customary to produce festive fireworks.
Ctrl Enter
Noticed oshЫbku Highlight text and press. Ctrl + Enter
We are
28 MAY - Border Guard DayToday is Border Guard Day
113 comments
Information
Dear reader, to leave comments on the publication, you must to register.