Russian fleet returned to the Mediterranean with unexpected consequences 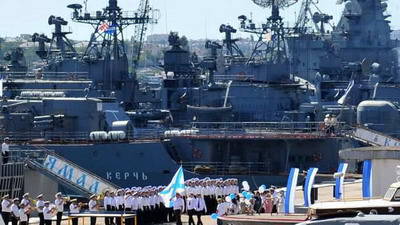 Israel’s recent attacks on Syria, in particular, the use of destroyers of nuclear bunkers was a gift from the sky for Russians, and opened the door for the deployment of the defense of its long-time ally in Syria. The Russians have returned to the Mediterranean to stay, and this can be a good lesson for the recklessness of the western policy of slowly building up aggression in the region.


Defense Minister Sergei Shoigu released the cat from the bag, saying that the constant presence of naval forces is necessary to protect Russian interests in the region. For two years now, the world has been observing how rationally Russia is coping with the ongoing escalation there, supported by a growing number of external countries, which, in fact, have declared war on Syria, believing that this will be a risk-free business.

And that's what corporate media doesn't tell you. The doctrine of the preemptive strike of the Israelites and the neocons will be challenged. Netanyahu can say anything about the “red lines”, the intersection of which will cause a preventive “defense” strike, but in the opinion of your humble servant, the goals set themselves will adopt such a policy.

Sources in the US Navy can arbitrarily sneer at the "old" Russian ships, but there is nothing old in what they carry - they are the work of art rockets, which they have made the highest priority of their defense policy.

Part of cheating by corporate media has become история that the proposal of C-300 systems for the region destabilizes it. Anyone who is puzzled by studying Jane's documentation (it seems that IHS Jane's consulting and analytical company; note from mixednews.ru) from 1996, will find that they are already in Syria. Perhaps they were under the control of the Russians, and were not officially Syrian. But it would be worth asking these lazy media what then put an end to the Turkish provocations, knocking down their F-16, which was an empty waste of the unfortunate pilots in peacetime.

Yes, C-300 were there all the time, and until they beat Israel. But all this will have to change. Israel’s unpunished flights in Lebanese airspace and their possibility of air strikes without entering Syria’s airspace may be stopped, or they will be stopped when the Russians so decide.

Their fleet, even their old ships, will carry such art objects. weapons systems like the S-400, which will give pilots only 2-3 seconds after they hear a “beep-beep” signal that is approaching them at great speed. Russian patrol ships will be able to shoot down any attacking Israeli aircraft, including those that will return to base after the strike. They will be able to shoot them down even on takeoff.

Any Israeli retaliation will cause a full-scale Russian response, which can be aimed at their bases and command structures. Their updated Iskander missiles are said to have speeds in the range up to 6-7 Mach, but our sources say their speed is over 8 Mach. When evading missile fire, they can deviate with overload by more than 30 G, and dive to the target at an angle of 90 degrees. Israeli bullies have never stood up to modern weapons, but they may have a chance. And they will not like it.

The beauty of the above scenario is that it can be carried out in a strictly defensive framework, while confronting an Israeli attack.

Yes, and I forgot to mention that targeting can be carried out either via satellite or programmed into the rocket’s memory, so that radio suppression is not useful. These are not mortar shells from the backyards of the Gaza Strip, which the Israelis claim is such a deadly threat to them that they constantly carry out retaliatory measures punishing the population as a “deterrent”.

As for accuracy, the Iskander can destroy Patriot batteries on the very first day. And the next day, the Russians may surrender to the mercy of an international court on the grounds that, under international law, the answer was completely legal. And if this is not enough, their second defense may be the Bush doctrine of a preventive strike for defensive purposes ... to destroy not the future threat, but one that already signals its hostile intentions.

If any of you think that I am exaggerating this scenario, I kept this material from publication until I received confirmation from the Israelis. The headline in Israel Hayom from 19 May was as follows:

"Expect Israeli strikes on shipments of Russian arms supplies to Syria-Hezbollah ... the US authorities told the Wall Street Journal that the next round of Israeli air strikes could be aimed at new Russian shipments of modern anti-ship missiles Yakhont."

This was nothing more than preparing the ground for the ongoing aggressive attacks by the Israel Defense Forces in support of Syrian militants. Pay attention to the automatic linking of Syria and Hezbollah, as if they share weapons with each other, or the Russians will allow them to give weapons to someone else. Did the Israelis get permission from the US? Something like that. Obama said Israel has the right to defend itself, which means that others also have that right. But the conditions of the game change significantly when there is someone in the Middle East who has the ability to take a full-scale retaliatory strike, including nuclear weapons.

And I forgot to mention something about the destroyers of nuclear bunkers that the Israelis used in Damascus. The Russians, of course, also have them. Despite statements by Netanyahu that Israel is ready for any surprises, he is not ready for any of this. And if the Russians respond to the Israeli attack, believe me, the United States will not intercede.

The United States has enough problems because of the involvement of the region in such a danger by arming Israel to the teeth, which its population itself could never afford, and even would not, even if it could.

When Israel suffers from a palpable retaliatory strike after its aggressive attack, I can promise you that ordinary Israelis will instantly change their minds about the cocky chatter they acquired by attacking a weak or defenseless opponent.

In the long run, more than a few international civilian and military think tanks have long suspected that this is what should have happened in the end in order to neutralize Israel as a universal threat. They will attack the wrong ones at the wrong time.

No one in the American army willingly agrees to die for a bully-Israel, except possibly Christian Zionists in the Air Force. So the world would become a safer place if they disappeared.

Ctrl Enter
Noticed a mistake Highlight text and press. Ctrl + Enter
We are
A great interview with Sergey Lavrov: about Ukraine, Obama and IranWhat you didn't want to know about England
421 comment
Information
Dear reader, to leave comments on the publication, you must to register.