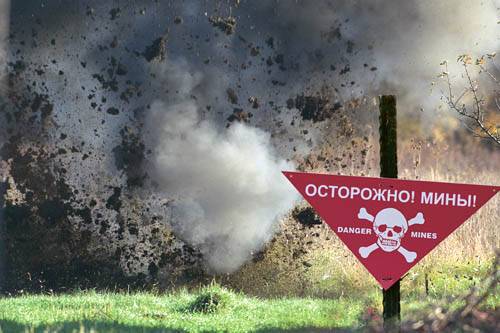 Everyone knows that an anti-personnel mine explodes if you step on it or hit it on a thin wire that gets in the way (the famous “stretch marks”). As a result, either an explosion force (high-explosive mines) or shrapnel (fragmentation mines) occurs.


However, the little-known mine PMP, which will be discussed, stands alone. It does not explode, but shoots. And at the same time never misses - a kind of "underground sniper". Mines, by the way, do not know any blunders at all.

The authors of the Ottawa Convention on the prohibition of anti-personnel mines left many loopholes for their use. The convention reads: “An anti-personnel mine” means a mine that is intended to explode from the presence, proximity or direct impact of a person and at the same time incapacitates, cripples or kills one or several people. ”

But, first of all, no mine can work at all from the “presence or proximity of a person”, because it does not have the mind and cannot determine this presence or proximity. In all cases, the victim, albeit unintentionally, itself activates the mine, affecting its sensitive elements - the sensors of the target. And secondly, the PMP mine, according to the Convention, is not at all, because it does not explode, but it shoots.

The family tree of the PMP dates back to ancient times, when hunters and warriors used various types of “crossbow”. Originally, they were bows or crossbows aimed at the path and triggered when the victim touched the cord or string. Later for this purpose they began to use firearms. weapon.

The reliability of such self-shooters was small, and their use was one-time. It was long and difficult to install a pistol or a gun, to aim it, to stretch the twine and especially to mask it. In addition, there was no guarantee that the bullet would hit the target and not fly past, which most often happened.

In the process of solving this problem, so-called bullet mines were born. In its most general form, a bullet anti-personnel mine is the simplest single-shot pistol dug into the ground with the barrel up. No aiming devices are required. The victim herself will force the mine to shoot, stepping on the trunk, the tip of which slightly sticks out of the ground and is almost invisible. Do not need this gun and complex shutter. He is not in a bullet mine at all. 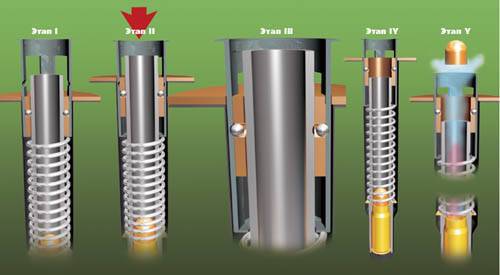 How does mine work? I. Mina in combat position. Ii. The victim stepped on a mine. Under pressure from the legs, the sleeve begins to descend, compressing the mainspring. Iii. The sleeve has dropped to the moment when the annular groove on it has reached the level of balls. Balls, which all the time pressed the spring-loaded barrel, roll out into the groove. Coupling coupling and trunk broken. The barrel is free. Iv. The barrel together with the chuck under the action of the spring quickly went down and hit the cap on the drummer. Shot! V. The bullet, passing the trunk and breaking through the rubber, falls into the victim's leg

Consider, as an example, a Soviet anti-personnel mine anti-personnel mine, which was adopted by the Soviet army at the beginning of the 1960s. The largest diameter of this mine is 3,6 cm, height - 12 cm, weight - just 145 grams. Mine is equipped with an 7,62 mm round cartridge for TT pistol. For a shot, you must press on its cap with a force from 7 to 30 kg.

When fired, a bullet pierces the foot or heel of a person stepping on it. This part of the human body is saturated with small, multiple bones, a large number of vessels, tendons and muscles. Along with a bullet, fragments of the sole of the shoe, as well as incandescent powder gases and powder particles, get into the wound. Foot injuries are always considered severe and require long-term treatment. Often after such injuries a person remains disabled, but under any conditions in the next two to three months, this soldier is no longer a fighter.

Although the engineers who developed the PMP proceeded from the task of creating a cheap, easy-to-use and installation mine intended for mass mining of approaches to their positions by low-skilled soldiers, it nevertheless fully fit into the American concept of “mine-minded weapons”.

This concept, which was presented in those years as a way to reduce soldiers' deaths during the war, actually pursued completely different goals. First of all, a sharp decrease in the cost of mines by reducing their size and the number of explosives, which made it possible to supply troops for the same money with a much larger number of mines. But most importantly, according to American economists, it is much more beneficial not to kill the enemy soldier, but to cripple him. This achieved several goals at once. Firstly, a crippled or killed soldier is equally unfit for war. Secondly, in contrast to the killed, the wounded is required to be taken out of the battlefield and delivered to the hospital, which consumes fuel, vehicles and distracts from the battlefield at least two soldiers. Thirdly, the state bears large expenses for the treatment, food and maintenance of the wounded. Fourth, the cripple in the future becomes a burden for the country, as it can not fully work. And most importantly, fifthly, the appearance of a large number of cripples inevitably undermines the morale of the population. 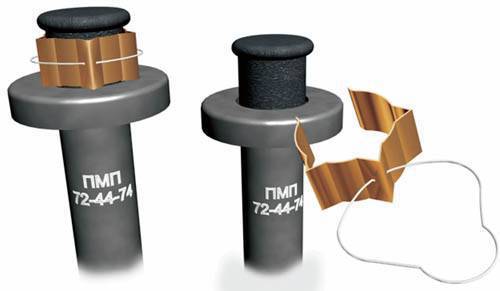 Handling a mine is extremely simple - you just need to fold the wire ring on the safety bracket and, pulling it, remove this bracket from the mine

Only in the cinema

Is it possible to have time to remove the leg from the mine at the moment of the shot? Artists in action movies can do this without much difficulty, even with ordinary, non-bullet mines. The reaction of the cine superman far exceeds the detonation rate of TNT (6000 meters per second). In life, everything is different. The mine triggering process lasts 0,2 – 0,4 seconds. The reaction of a person to an external stimulus (that is, the time from the moment of realization to the moment of giving the order to the muscles by the brain) - 0,2 – 0,7 seconds. It takes at least 0,4 – 0,8 seconds to contract the muscles and stop the foot from the mine. Total - 0,6 – 1,5 seconds. That is, even theoretically, there is no possibility of salvation.

Puncture in the ground

Installing mines is very simple. It is enough to pierce a hole in the ground, which is equal to the diameter of the mine body and depth to the body length, and lower the mine there so that only a rubber cap rises above the surface. For this purpose, the mines have a special metal piercer - a pin. If the ground is too soft or swampy, then a plywood circle (support washer) with a diameter of 10 cm, which is also included in the mine package, can be placed under the cap cap. 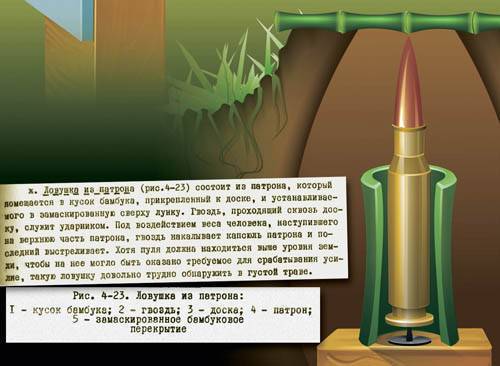 It seems that a mine is good for everyone - both simple and easy to use, reliable and effective and promising for mechanization of mining - it is very simple to develop a device that can install such mines by the thousands in a matter of hours. At least on the model of machines for planting forests. However, despite all this, bullet mines have not been widely used.

There is one reason. PMP does not possess the main damaging factor inherent in all other types of mines: it does not lead to the development of mine fear in the enemy. The fact is that on the battlefield a shot and a defeat of a soldier by a bullet are usually not perceived as the work of a mine. From the side it seems as if a fallen soldier is simply overwhelmed by an enemy shot. But just mine fear is a powerful psychological weapon that can stop the advancing infantry, deprive the soldiers of the determination to go forward, to paralyze their will.

Ctrl Enter
Noticed a mistake Highlight text and press. Ctrl + Enter
We are
Perspective anti-personnel mine POM-3 "Medallion"Anti-personnel mine Schützenmine 42 (Germany)
57 comments
Information
Dear reader, to leave comments on the publication, you must to register.