We just crush. Today, nuclear weapons are no longer enough to deter outside aggressive intentions.

22 May 2013
67
The role of science in the creation of new weapons is constantly growing. Advanced scientific and technological advances contribute to the emergence of fundamentally different types weapons - laser, electromagnetic, informational, which qualitatively changes the appearance of the armed forces. Traditional types of weapons and military equipment are no longer able to ensure success in modern warfare. Therefore, in the race of military technology, it is important not to be an outsider.


It is characteristic that the leaders of the leading countries consider the level of development of defense science and technology not only as a guarantee of military superiority, but also as a condition for a decent positioning of the state in the world community. And this is confirmed by millennia. stories civilizations: there were evolutionary changes in the social system, wars, armed forces and means of warfare. With the advent of the first states, the need for their defense and security was created. The effectiveness of solving these tasks was determined by the forms and methods of military activity used in a particular historical period or, according to modern terminology, by basic military technologies (BVT).

In our time it has become fashionable to talk about the innovative development of the country, about advanced, breakthrough, high and other technologies. From the excessively frequent use of the term “technology” and its derivative, “military technology”, the reader may get an idea of ​​an exceptionally favorable state of affairs in the military-technological field.

However, this is not the case. Further technological improvement of weapons and military equipment is complicated by the fact that the scientific and technical reserve (NTZ), created in the Soviet period, has been practically exhausted. The set of scientific achievements and technologies focused on the implementation of weapons of the industrial age, possessing powerful damaging factors, but poor security, low selectivity, weak autonomy, lack of “flexibility” of impact, as well as a number of other properties that characterize its “intellectuality”, fulfilled its historical mission and was either embodied in existing models of weapons and military equipment, or was lost during the period of restructuring, disintegration and ill-considered conversion policy of the state.

Therefore, the imperative of time is to recreate the national defense NTRP as soon as possible, given that one of the military-strategic tasks in the name of which it is created is to contain aggression. Under the conditions of the global scientific and technological revolution, the possession of nuclear weapons can no longer remain a sufficient factor for deterring aggressive aspirations from the outside. Non-conventional types of weapons (weapons on new physical principles - ONFP), as well as qualitatively improved conventional weapons and military equipment, accumulated in themselves the latest scientific and technological achievements and technologies, over time can become one of the main tools to maintain military-strategic parity. Unfortunately, in recent years, the scientific and technical groundwork (and especially its fundamental component) has actually been the “stepchild” of the state defense order (GOZ) and work on its creation was financed according to the residual principle.

As of 2012, the degree of overlapping of the list of basic and critical military technologies by research and development commissioned by the Russian Ministry of Defense was 35 – 40 percent, and the list of priority areas of basic and exploratory research (FPI) was only 30. But at the same time, multi-billion dollar contracts were concluded for the construction of the French Mistral helicopter carriers, which, as it turned out now, are completely unsuitable for our climatic conditions, decisions were made to purchase Italian armored vehicles and other types of foreign-made weapons. At the scientific and technical councils of the Ministry of Defense, in response to proposals for the formulation of new fundamental, prospecting and applied work in priority scientific and technical areas, recommendations were often made to purchase appropriate technologies abroad. However, the legislation of a number of leading foreign countries prohibits the sale to other states of not only military, but also civilian technologies. In this regard, it is useful to recall the refusal in 2009 of the American auto concern General Motors to sell a controlling stake in Opel to the Canadian-Russian consortium Magna-Sberbank because of the risk of technology leakage.

Therefore, in the best case, our defense department, refusing to conduct its own scientific and technological research, could only rely on the provision of foreign technologies the day before yesterday. Such a policy not only did not contribute to the generation of new scientific and technological ideas by scientists and specialists of the Russian Academy of Sciences (RAS), higher schools and industry, but also led to the loss of those positions in which domestic military technologies could compete with foreign ones.

Currently, the situation is changing for the better. The leadership of the country and the Ministry of Defense made a number of decisions related to the further development of the defense science and technology complex. In particular, 16 of October 2012 was signed by the President of the Federal Law on the Advanced Research Foundation (No. 174-FZ), the main purpose of which is to promote research and development in the interests of the country's defense and state security. new results in the military-technical, technological and socio-economic spheres. Conducted and planned (including in the part of the FPI) defense research projects in federal targeted programs (FTP). In addition, in a number of federal programs, in the Basic Scientific Research Program of the State Academies of Sciences, in the framework of projects funded by RUSNANO OJSC and the Skolkovo Foundation, as well as by grants from the Russian Foundation for Basic Research and the Russian Humanitarian Foundation, prospects for dual, that is, civil and military use. At the same time, their degree of maturity has a very wide variation - from new scientific knowledge about phenomena, effects, laws and patterns of interest to the country's defense and state security, to prototyping and experimental samples of technical devices that have prospects for use in the creation of weapons and military equipment. This instills hope that the national defense NTRP will not only be restored, but also complemented by new scientific knowledge and breakthrough scientific and technical solutions.

The emergence of new structures outside the military department related to the order of military-technological research and development, the formation of relevant sections within the Federal Program should not in any way detract from the role of the Russian Defense Ministry in creating the NTR for promising conventional and non-conventional (ONFP) weapons. On the contrary, it should increase, first of all, in such areas as the substantiation of the priority directions of the development of military technologies; formation of an effective mechanism of interdepartmental coordination of research and development carried out in the State Armaments Program (GWP), federal target programs, programs of the Russian Academy of Sciences and with the support of research and innovation funds; examination of scientific and technological projects of a defense nature.

Unfortunately, the formation of a mechanism for interdepartmental coordination in the field of creating a defense NTRP is currently at the very initial stage, and there is practically no information interaction between various ministries and departments in this field. This situation is unacceptable, since in the near future it will be necessary not only to coordinate the relevant sections of the LG and FTP, but also to organize joint work in the formation of the State Armaments Program for the 2016 – 2025 years. Indeed, according to the federal law of the Russian Federation on 29 December 2012 of the year No. 275-ФЗ “On the state defense order”, state-owned R & D customers for the creation of new production technologies for weapons and military equipment can now be not only federal executive bodies with armed forces formations (as it was written down in the previous version of the law), but also other federal authorities ensuring the delivery of products for the state defense order, in particular, the Ministry of Industry and Trade of Russia and Roscosmos.

The adoption of the new edition of the law “On State Defense Order” almost coincided with the beginning of the formation of new departments within the Ministry of Defense related to scientific and innovative activities, in addition to those created during the Soviet period, have proven their efficiency decades and survived in times like the general collapse of the beginning of the 90-ies, and ill-considered reforms of recent years. Therefore, along with interdepartmental coordination, well-coordinated, balanced, constructive work of all military administration bodies associated with the development of military technologies is required, regardless of which intra-departmental "trunk" they belong to. Work aimed not at dragging the rope in the part of the corresponding functionality, but at achieving synergy effect from the efforts of all stakeholders in terms of maintaining the proper level and further building up the scientific and technical potential for promising conventional weapons and arming on new physical principles. At the same time, one should listen as little as possible to the advice of people who have long lost contact with the state’s military organization and who are unable to adequately assess the current realities. 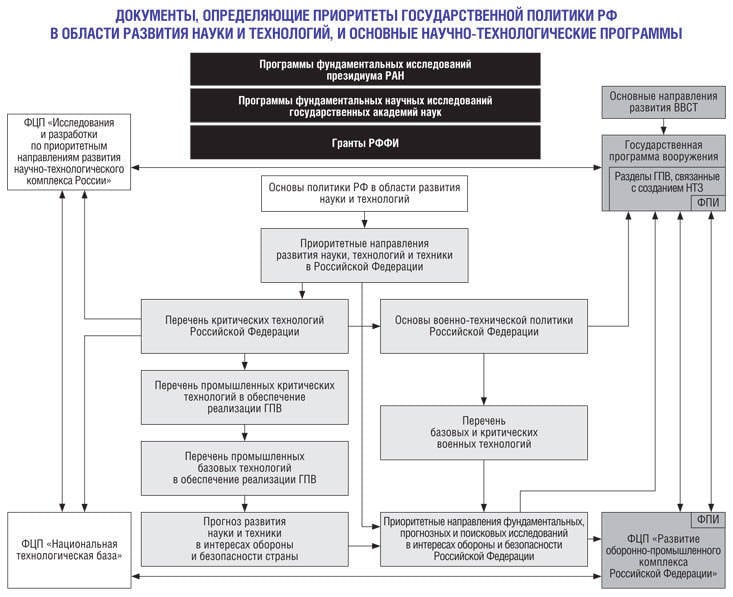 The increase in the requirements for the quality of programs and plans for the creation of military technologies necessitates an improvement in the methodology of the program-targeted planning (PCP) of their development. The PCP methodology used in practice must have the necessary flexibility and adaptive properties that allow for the prompt consideration of the interests of the various departments involved in this process.

In the interests of the Ministry of Defense

For the development of military technologies, the main tasks of the military department include:

Ctrl Enter
Noticed a mistake Highlight text and press. Ctrl + Enter
We are
Why rebuild repsMilitary reform as an integral part of the security concept of the Russian Federation: Systematic dynamic assessment
67 comments
Information
Dear reader, to leave comments on the publication, you must to register.