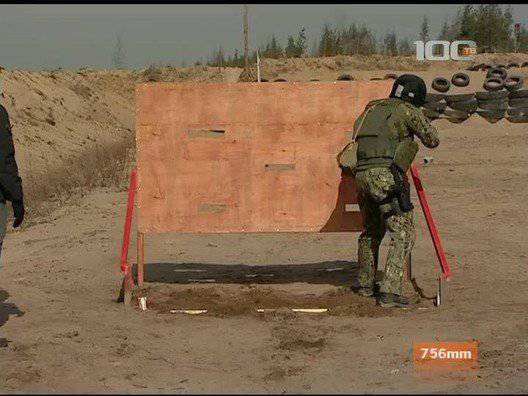 In the last days of April, 2013, in the village of Sertolovo, near St. Petersburg, a regular championship of the Federal Security Service in practical shooting from combat weapons among the special forces of the Russian Federation.

The championship was attended by about 150 people - the best special-purpose employees who came from all regions of Russia. The host team hosted the guests - a special unit “Grad” of the FSB Directorate for the city of St. Petersburg.

One and a half hundred highly professional fighters, from head to toe, hung with means of protection and weapons, under training conditions worked out combat techniques that in real life in case of unforeseen situations can save more than one human life.

Colonel Alexander Krylov, the chief referee of the competition, as well as the head of the regional special service "Grad" in the city of St. Petersburg and the Leningrad region, said that such a championship in the region was not the first time. This year the competition started for the sixth time. By the way, the host of the championship unit "Grad" in 2013, celebrates its twentieth anniversary.

The main goal of the championship is to improve the level of professional training of special forces, to study best practices, to improve the shooting skills of employees, and, of course, to identify the best of the best.

Competition conditions are as close to real as possible. All weapons - only the most modern, from pistols, machine guns and rifles to grenade launchers. Preference is given to foreign models, in particular, German and American. According to the organizers of the championship, it is more practical, reliable and universal. Each of the participants during the championship must demonstrate their ability to own all these types of weapons. In total, within the framework of the championship it was necessary to perform ten exercises, and it was necessary to work not only in groups, but also alone.

Among the most striking tests can be called a special special forces duel. First you need to pierce the brick. Only after that the fighter will be able to see three targets (in the framework of this competition, these are balloons). Teammates do not have the right to prompt members of their team, because this is followed by harsh punishment in the form of withdrawal from the race or penalty points for violating the rules of the championship. Such strict rules do not cause any confusion, because in real life special forces soldiers must be able to make responsible, correct decisions on their own, without any prompts. Therefore, the only thing that is allowed by the rules is to instruct before the start of the competition and to discuss with the members on the team the methods for the best performance of one or another task. In addition, many exercises require not only excellent fire training, but also attention and memory. So, in particular, before performing the task called “Bus”, where the fighters needed to take the bus by storm and free the hostages, three seconds before the attack it was necessary to memorize the terrorist’s face from a photograph, and then, inside the bus, recognize him among many targets and destroy. At the same time, according to the rules of the competition, for being taken hostage, instant disqualification threatened.

It should be noted that this year's championship was slightly different from previous ones. The fact is that the organizers decided to completely change the principle of the competition. And therefore, within the framework of competitions, not only the individual qualities of a fighter were assessed, but also his ability to act together in one team. In the exercises of special forces it is very important not only a professional approach, but also a creative one, because no one knows in advance what tasks to be overcome in the championship.

Competitions were held for three days, not only in the daytime, but also at night. And this is another common feature with real life, because the special forces very often have to act under the cover of darkness. Three dozen of the best spetsnaz fighters who managed to pass all the trials took part in night firing.

Traditionally, the championship has its annual leaders. This special forces units "Alpha" and "Vympel". But this does not mean that new heroes, in particular, fighters from Krasnodar or Nizhny Novgorod, who have proven themselves, cannot appear in the new championship.

Another innovation of the championship was that, along with the special forces soldiers, the civilian team, which included international-class masters of sports and champions of Russia in practical shooting, was also training. The organizers are sure that this is useful both for one and the other, because it helps to keep track of all the new training methods, weapons and ammunition, equipment that appear in the world, to test and come together to certain conclusions.

According to representatives of the leadership of the security forces of the Russian Federation who attended the championship, as well as the judges of the competition, the fighters of special units demonstrated a high professional level and readiness to perform various operational and combat tasks in real life.