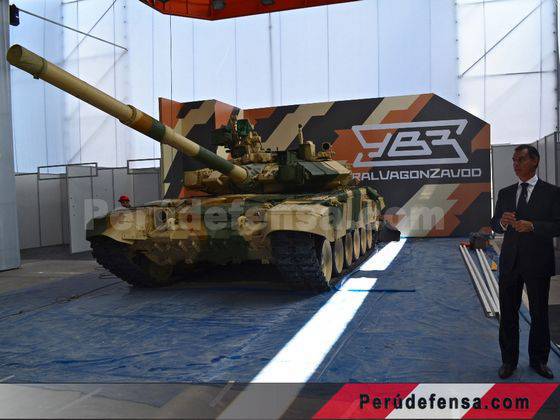 The 4-th International Exhibition of Defense Technologies SITDEF-2013 is starting today in Lima, which runs until May 19. Companies from 24 countries take part in the showroom.


On the eve of the opening of the exhibition in an interview with RIA News»The head of the regional department of Rosoboronexport and the head of the company's delegation at the SITDEF-2013 exhibition Sergey Ladygin said that the Peruvian side is taking an active interest in the T-90C MBT.

In addition, he said, “Peru is currently showing interest in Russian aviation and automotive technology. There are appeals regarding the possible supply of air defense systems, anti-tank systems, engineering and construction equipment, components and spare parts. ”

According to TSAMTO, Russia has good chances to expand its presence in the arms market of Peru due to an active marketing policy to promote the Russian defense industry. In addition, the current situation on the Peru market has been favorable due to the cancellation of the results of a number of previously announced tenders, where Russia has lost to its competitors, and now it can again fight for orders. This applies to short-range and medium-range air defense systems, OBT and MANPADS.

In April, 2012, the Ministry of Defense of Peru announced the cancellation of the decision to issue a contract for the supply of short and medium-range air defense systems to the international Air Force TRIAD consortium. The project cost was estimated at 150 million dollars.

The TRIAD consortium, which included the American company Northrop Grumman, the Israeli Raphael and the Polish group Bumar, proposed the 3 early warning radar AN / TPS-78, the short-range air defense system Spider-SR, and the Poprad air defense system from Peru. "With the" Thunder "MANPADS.

In addition to the TRIAD consortium, Rosoboronexport and Chinese companies CETC and CPMIEC took part in the tender.

After a thorough review of the evaluation procedure, the special commission announced that the acquisition program should be canceled due to “procedural errors”.

Initially, Peru’s defense department intended to purchase manufactured by the Chinese corporation NORINCO MBT MBT-2000, the consignment of which was delivered to the country for evaluation.

Nevertheless, as it turned out later, the Chinese side misinformed the Peruvian defense department about its permission to re-export the tanks MVT-2000 engine-transmission compartments with a 6TD-2 engine and a Ukrainian-made transmission.

Under pressure from the opposition, the defense ministry of Peru decided to cancel the contract and postpone the MBT procurement program to a later date.

According to the Infodifensa agency, the Peruvian Ground Forces canceled the contract for the purchase of Chiron MANPADS produced by the South Korean company LIG Nex1.

In December 2012, the Ministry of Defense Peru summed up the tender for the supply of MANPADS, the winner of which was the South Korean company LIG Nex1, which offered KP-SAM MANPADS (“Shin Gang”; Shin Gung; export name - “Chiron”; Chiron). The contract worth 109,15 of new salts (42,87 million dollars) provided for the supply of 18 launchers, more 100 missiles, 3 radar, simulators, and provision of services for personnel training and equipment maintenance.

The proposals for the competition were also submitted by the China Precision Engineering Import-Export Corporation CPMIEC (MANPADS QW-18; FN-16) and Rosoboronexport (Igla-S).

After selecting the winner of LIG Nex1, two other bidders filed protests. CPMIEC believed it should win, because it offered the lowest price for the delivery of QW-18 MANPADS. In turn, Rosoboronexport stated that the South Korean MANPADS includes technologies for the export of which to third countries the Russian side did not give consent. The South Korean company claimed that only national technologies allowed for sale abroad were used in the complex.

Apparently, Rosoboronexport was able to confirm its statements with the relevant documents. At the same time, the South Korean company demanded an increase in prepayment from 30% to 60%. This led to a decision to cancel the contract with LIG Nex1.

In addition, as it became known in January 2013, the Government of Spain offered the EF-20 "Typhoon" Tranche 2000 fighter jets to the Peru Air Force 1.

At the same time, due to the limited military budget of Peru, the implementation of the program for the purchase of fighters in the short term seems unlikely.

At the end of March 2013, the Ministry of Defense of Peru submitted for approval to the Ministry of Economy and Finance a project to finance the procurement of 24 multi-purpose military transport helicopters Mi-171Ш.

According to information sources in the Ministry of Defense of Peru, the cost of one helicopter will be 16,95 million dollars (the total cost of 24 units - 406,8 million dollars).

The Peruvian Command has sent a request for the purchase of 18 new helicopters at the end of 2012. In the future, the number of cars scheduled for purchase increased to 24 units.

The main bidders for the supply were called “Eurocopter” with AS-332C1 “Super Puma” and AS-532 “Cougar” and OJSC “Helicopters of Russia” with Mi-171Sh.

In early March of this year, the evaluation of the proposals of two applicants by a special commission began. As a result, after analyzing the report of the technical committee on the recommendation of the Joint Command of the Peruvian Armed Forces and Army Aviation, a decision was made in favor of the Mi-171Ш.

According to local analysts, the adoption of the Russian proposal was expected due to lower cost, unpretentiousness in operation, greater payload, the availability of infrastructure and maintenance skills for Mi helicopters.

Below are published statistics describing the position of Peru in the structure of world arms imports. The calculations are based on data available to TSAMTO as of the autumn of 2012.

Peru's package of orders for the import of defense products

In the Latin American region, Peru’s 6 ranks in terms of a package of import orders for Peru, behind Brazil, Venezuela, Chile, Mexico and Colombia.

According to the actual volume of arms imports by the period 2004-2011. Peru takes 65 place in the world.

Actual volume of identified imports of weapons of Peru in 2004-2011 TSAMTO estimates in the amount of 716 million dollars.

In the Latin American region, in terms of the actual volume of defense drug imports over the 2004-2011 period. Peru is ranked 6, behind Venezuela, Chile, Brazil, Mexico and Colombia.

Peruvian Arms Supplies in 2004-2011 implemented 12 countries. Over the 8-year period, the volume of identified military imports of Peru in all exporting countries amounted, according to TSAMTO, to 716 million dollars.

During the same period, Peru formed a package of orders for the purchase of weapons in the amount of 1,071 billion dollars.

In addition, the supply of weapons to Peru in 2004-2011. carried out the United Kingdom, Germany, India, Canada, China, the Netherlands and Ukraine.

The valuation of the Peruvian import contract package for selected categories of weapons in 2004-2011.

In the structure of the package of orders of Peru for the import of defense products for certain categories of weapons, the first place in the period 2004-2011. occupies the category of multi-purpose fighters (repair and modernization) - 246,7 million dollars. The second place is occupied by the category of multi-purpose helicopters - 149,3 million dollars. Closes the top three category BNK OK - 142 million dollars. In general, the period 2004-2011. Peru has formed a package of orders for the import of weapons products by 15 categories of conventional weapons.

In general, the period 2004-2011. Peru imported STIs in 14 categories of conventional weapons.

More detailed materials are published on the website of TSAMTO in the open access in the sections "Exhibitions of Armaments" and "Current Analytical Materials".

Ctrl Enter
Noticed oshЫbku Highlight text and press. Ctrl + Enter
We are
The action “Military service under the contract is your choice!” In Rostov-on-Don: future contract servicemen, exhibitions and “Russian Knights”
Military Reviewin Yandex News
Military Reviewin Google News
15 comments
Information
Dear reader, to leave comments on the publication, you must to register.