15 May 2013
30
Perpetuum mobile design life of the aviation complex to them. S.V. Ilyushin


After the collapse of the Soviet Union, the Russian Federation lost its military transport aviation. Serially produced IL-76 remained in Uzbekistan, Antonov cars - in Ukraine. Aviation complex them. S.V. Ilyushin, founded in 1933 as an experienced design bureau, turned out to be the only company in Russia with experience in creating military transport vehicles. Ilyushin residents had to make a difficult choice of the future path. Continuing to build wide-body aircraft - the IL-86, IL-96, the design bureau chose the main line of development for the revival, or rather, the creation of military transport aircraft from scratch. Viktor Vladimirovich Livanov, General Director - General Designer of OJSC Il, talks about how this was possible and about further work plans.

"MIC": Viktor Vladimirovich, you came to KB them. Ilyushin in 1967 year, when work on the creation of IL-76 just started. What was then and now the main competitive advantage of IL aircraft?

- When I came to the company, Sergey Vladimirovich Ilyushin was still working here. He taught us: "Never scold competitors, praise your own." You can compare specifically: what, for example, is good IL-96-300 compared to A340 Airbus. There are pluses, there are downsides, as in every case. But the general opinion of all the operating organizations, civilian and military: Il-grade airplanes have simplicity, reliability and efficiency. It was these requirements that Sergey Vladimirovich Ilyushin set forth at the time. And now for 80 for years, we have been making airplanes primarily reliable, economical and simple in technology.

- The base plane, which we launched today in Ulyanovsk, retained all the positive qualities that it possessed during 40 years. These are operational advantages, and unpretentiousness, and the possibility of operation at remote airfields, far from bases, and reliability.

"MIC": Please name the main innovations of IL-76MD-90A. What do they give?

- About 70 percent of systems and units underwent modernization. Aircraft 40 years from the beginning of its flight work. We have replaced the subsystems with modern ones, which are more economical, lighter, more reliable. Made a new wing, having received a weight reduction of more than a ton and reducing the complexity of its manufacture by 20 percent. 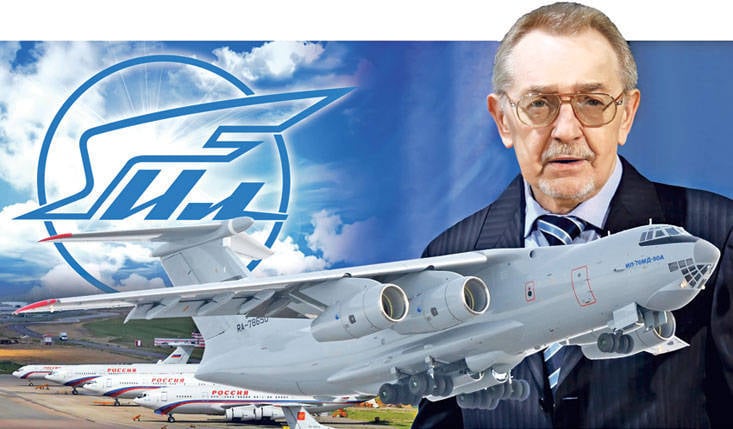 The PS-90А-76 engine is more economical than the D-30КП-2 engine that we had on the base plane and still stands on the main fleet. With this engine, the aircraft meets all ICAO noise requirements, chapter 4 in particular, and emissions. Although the engine is somewhat heavier and larger in diameter.

- No, first of all, it is the reliability and safety of operating the aircraft and facilitating the work of the flight crew. On the old cabins there are several dozen instruments, it is rather difficult to follow them, and the “glass cabin” on the IL-76MD-90А, apart from the navigation, flight situation, responds only to failures. If everything is normal with the plane, the pilot can fly and fly.

"MIC": How to increase the range, capacity?

- The maximum payload of the base aircraft - 40 tons. IL-76MD-90А - 60 tons maximum. The range of the aircraft has increased by about a thousand kilometers by reducing the weight of an empty aircraft and engine efficiency.

"MIC": What do the preliminary market estimates of this machine say, how much will the aircraft be in demand?

- We evaluated the market for military and civilian use. The Ministry of Emergency Situations on IL-76 aircraft perform a number of non-military functions, which will be expanded. We recently transported injured children from Belgium on IL-76 aircraft equipped in the hospital version. Unfortunately, we live in a troubled world.

As for the commercial part, we have not yet begun a marketing campaign to promote the aircraft to the market. Firstly, it is necessary to confirm the flight performance and, secondly, we consider the main task to fulfill the state defense order.

"MIC": Still, what are the export expectations, are there agreements with potential customers other than the Ministry of Defense?

- We hope that the prospects are very good. Today, more than a hundred IL-76 planes flying abroad have been bought officially, and not resold in dashing Russian times. Western partners, exploiting IL-76, are closely monitoring our progress. Few people believed that we would launch this aircraft at all. We launched it. Now they are waiting for what flight performance it will show. In addition, India, Algeria, Iran, Iraq, Libya want to touch everything. Together with Rosoboronexport, we drew up a marketing plan and began to implement it. The delegations of a number of countries - potential buyers visited our company, looked at the flight copy. Some foreign delegations have already visited Ulyanovsk to make sure that the plane is flying and the plant is ready for mass production.

"MIC": What is the maximum load can be at the Ulyanovsk production plant?

- It all depends on the suppliers. Contracting for the first 39 machines with all of our suppliers is in full swing. Everything is very difficult, but I think this process has already been completed on 80. By the way, by the way, the entire production program of Ulyanovsk has been approved before 2020, we have to reach 18 machines a year. In my opinion, for Ulyanovsk this is enough - a serious load.

"MIC": At the moment, what other projects exist in the aviation complex to them. Ilyushin?

According to the classification, MTA is an average military transport aircraft. If on IL-76 we have the maximum payload of 60 tons, then on this plane - 20. We are trying to make it sufficiently unified so that the Russian and Indian armies are not re-trained and the ground infrastructure is ready. Formally, this aircraft in its size, size - half of the 76-th.

- Not. That is impossible to say. He has his own niche. The largest market in the world - this is just the average military transport vehicles, twenty-ton. There is a famous, absolutely unique American C-130 aircraft. It is under 60 for years, but it has been constantly upgraded and continues to be mass-produced. We, Ilyushins, still regret that we stopped the production of IL-18 aircraft. They are in demand today. It was possible to modernize, install new modern engine, new equipment and continue to produce it, repeating the fate of C-130.

"MIC": When will we get the first MTA?

"MIC": To create an airplane Ilyushins work together with the Indians?

- Yes, our specialists and Indians work. We are now at the stage of choosing the final look, materials, components. This plane is only being laid, it will live for at least 40 years, so we are trying to apply absolutely new materials on it, in particular aluminum-lithium alloys. Today we are discussing with the military about the possibility of making composite plumage, which is less susceptible to damage. And we also want all the systems on this plane to be new, modern.

- No, that's why they agreed to work together to build airplanes to go through this school. For many years, India, like China, has been pursuing a strategy not to buy, but to create and manufacture inside the country. And this is absolutely correct. Instead of simply buying weapons, Indians want to become partners in design and production. The other side of this cooperation is the investment burden, which is already divided into two countries, not only Russia. This is beneficial for Russia. Next is the issue of market expansion. We took the Russian market, took the Indian market, and already through India it is easier to enter the markets of third countries. These are the reasons that, together with our Indian colleagues, have pushed for the joint creation of this aircraft.

We already have a launch order for two countries - 145 aircraft, this allows you to start the program.

“MIC”: How do you think the situation with military transport aviation in the country has leveled off now?

- The deep modernization of the IL-76 is the first step in the revival of the military transport aviation of the Russian Federation. MTA is the second step. The third step will be the creation of a light military transport aircraft. Well, then we will see how the fate of An-124 will develop. Either we will continue this line, modernizing it, or we will offer something new. Unfortunately, the plane is not born very quickly.

Born September 17, 1943 in Khabarovsk. He graduated from the Moscow Aviation Technological Institute in 1967. Since the same year, he has been working at an aircraft building enterprise (now the Ilyushin airline complex) as a process engineer, head of the coordination and analysis team, and deputy chief of design bureau. In 1988–1996, he was the director of the airline complex, and in 1996–1997, he was the deputy minister of the defense industry of the Russian Federation. Academician of the Russian Academy of Transport and the Academy of Aeronautics. Laureate of the State Prize of the Russian Federation (2000), awarded the Order of the Badge of Honor, Friendship of Peoples, "For Services to the Fatherland" IV degree. Married, has two children. Is fond of historical literature.

Ctrl Enter
Noticed a mistake Highlight text and press. Ctrl + Enter
We are
Flight to the futureList of destroyed the largest and most high-tech enterprises
30 comments
Information
Dear reader, to leave comments on the publication, you must to register.