Evgeny Pozhidaev: The ghost of the "Red Colossus" - the causes of the military disaster 1941 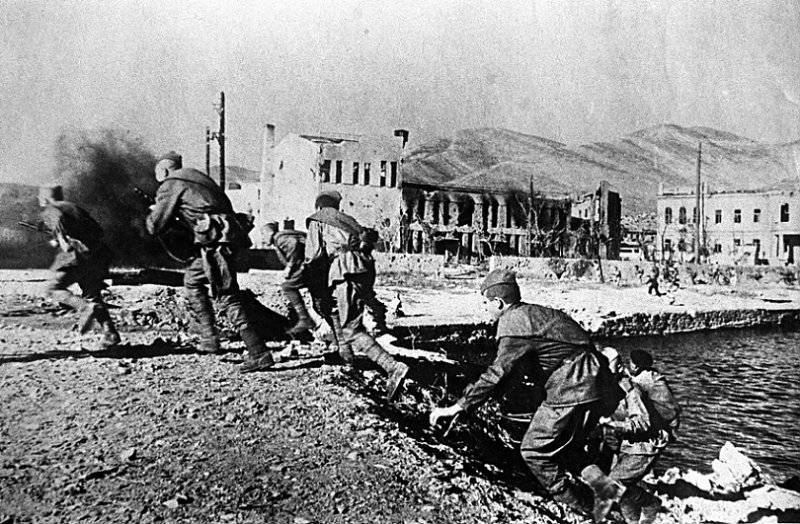 9 May 2013 Russia celebrated the 68 anniversary of Victory in the Great Patriotic War - once again recalling its huge price. At the same time, it is obvious that the huge price of Victory is 90% the result of the 1941 disaster, when the personnel Red Army was lost almost completely together with a huge amount of equipment and weapons, and the country lost a third of its industrial potential.


The traditional Soviet version of its causes boiled down to the superiority of the Wehrmacht in the amount of the latest weapons, surprise attacks and miscalculations of Stalin. However, in the post-Soviet period, the parameters of the “red colossus”, which possessed tens of thousands, began to loom more and more tanks, aircraft and artillery barrels - and formally superior to the Wehrmacht in all respects at times. At first glance, the fall of the giant looks almost inexplicable - and this has spawned a long series of speculation.

Mr. Rezun tells about Stalin's sinister plans and claims that the USSR army was not preparing for a defensive war and came under attack while preparing for the attack. Mr. Solonin explores the depths of the people's soul, disillusioned party and government policies: "Mass desertion and mass surrender were both the cause and effect, and the main content of the process of turning the Red Army into an uncontrollable crowd." Mr. Mukhin talks about the world Jewish conspiracy led by Kaganovich and Khrushchev. The phantoms of motorway tanks, although often ridiculed, are still present in the mass consciousness. Meanwhile, the causes of the 1941 disaster are simple and fairly obvious.

Firstly, the fully mobilized army attacked the army, which was in the process of mobilization, with all the ensuing consequences. Further, contrary to the common myth, the attackers had an advantage in manpower. The Wehrmacht, along with the troops of the satellites, concentrated on the border of 4,6 million people; 2,9 million opposed him in the western districts. At the same time, 82% of the Wehrmacht's soldiers had combat experience compared to just a few percent in the Red Army. The infantry armament of the German troops allowed them to conduct noticeably more dense fire - primarily due to the use of the versatile and very rapid-fire machine guns MG34.

How many cars did the anti-Soviet coalition have? According to Thomas Yents - 3811 units. However, it does not take into account the assault guns, anti-tank self-propelled guns, tanks that were part of the landing groups of armored trains and armored vehicles of the allies of Germany. As a result, the minimum estimate of a tank park concentrated in the East is 5600 units. At the same time, looking at the list of vehicles, you can see that there are more medium tanks and self-propelled guns at their base on the eastern front in the Wehrmacht than in the Red Army.

However, quantity is not everything. According to a common myth, the Red Army had a qualitative superiority. Alas, but ... The test results of the T-34 at the Aberdeen Proving Ground in the United States looked like this. The first breakdown of the T-34 occurred already after 60 km of run - the caterpillar broke, and after 343 km the tank failed and could not be repaired - the engine collapsed to a state that could not be restored, the transmission died. Suspension because of the bad steel on the springs slipped, the tank's clearance decreased, and hence the patency. The motor turning the tower was weak, sparked and quickly failed. The quality of body welding was below any criticism. Meanwhile, the Americans got "the best tank of the best factory", one of the 5 specially assembled copies. In general, the B-2 engine's passport life did not exceed the 100-120 hours on the stand and the 45-70 in a real tank.

At the same time, the T-34 outside of Aberdeen proved to be a miracle of reliability compared to the KV, which specialized in permanent breakdowns (passport life of 80-100 hours). Both tanks were distinguished by poor visibility, poor optics and minimal radio communications. Finally, on the T-34, the function of the gunner was combined with the function of the commander, which radically reduced the combat rate of fire.

However, the extremely low reliability of the new tanks was largely due to children's design diseases, largely overcome later. However, for a long time the used machines did not differ in phenomenal indicators. The motor life of the T-26 engine was 180 hours, BT after 1936 of the year - 250 hours. In theory. Since most of the tanks were no longer new, in fact, the service life was 40-100 hours. At the same time, besides the traditional problems with optics and radio communications, the cars were actually very poorly armed. As the test sites showed before the war, the 45 mm cannon projectile did not pierce the side of the German T-III medium tank with the 400 m - launched in 1936-39. shells were defective.

The poor training of tankers organically resulted from the low motor potential - the motor potential was saved, despite the fact that the management of domestic tanks was difficult.

In other words, the industry created in the shortest possible time did everything badly — steel, optics, transmissions, gunpowder, projectiles — and could not do otherwise. Hastily trained engineers with minimal experience invented non-working air filters for engines and copied the worst possible foreign transmissions.

Such were the costs of technological lag — but the problems of the Red Army were not exhausted by them. Let's look at how the organization of the standard division in June of the 1941 looked.

The Red Army Tank Division had 375 tanks against 200 in the Wehrmacht Panzer Division. However, almost half as many tanks were serviced by one and a half times more cars - 2147 versus 1360. For each German tank, therefore, there were three times more cars than in the Red Army.

The rifle division of the Red Army with the number of people in 10858 had a 203 car, the Wehrmacht with the number of 16859 people 903. In other words, the ratio of the level of motorization again - tripled. In fact, the situation for the “soviets” was even worse, because the average tonnage of German trucks was much larger. And even worse, because even what was supposed to be a very curtailed state of the Red Army, did not go to the troops. For example, in the 43 Tank Division of regular 1360 vehicles there were 630, of which 150 were faulty.

A much higher level of automobilization gave the Wehrmacht compounds, firstly, much greater mobility. Meanwhile, you can have two hundred divisions, the enemy has one hundred, but if he can concentrate three divisions against one of yours in this particular place, he will simply destroy you in parts, each time having an overwhelming local advantage. In this case, your troops, most likely, will simply collapse on endless marches, wasting time on fuel and engine life, unsuccessfully trying to catch in that particular place. About this happened to the Red Army in 1941. Roughly speaking, the Red Army against the Wehrmacht at the initial stage of the war is the Chinese infantry against the cavalry of Genghis Khan.

Secondly, a greater level of automobilization allowed a more balanced structure of the compound, allowing it to carry with it a mass of extremely useful "additions" - and effectively maneuver them on the battlefield. Thus, with half the number of tanks, the Wehrmacht tank division had 1,6 times more personnel, mainly due to attached infantry, 58 field artillery guns against 28, 101 anti-tank guns against 12, 63 anti-aircraft guns against 12.

The Wehrmacht rifle division, with 1,6 times more personnel, had twice as many field artillery guns (74 versus 36) and four times more anti-tank guns (75 guns against 18). The weight of the volley of the German division was three times greater than that of the Soviet - that is, the saturation with fire weapons in the Wehrmacht division was twice as high.

In other words, the tank divisions of the Wehrmacht were fairly well protected from air strikes, unlike the almost defenseless Soviet, went into battle with effective support from field artillery, and when meeting with formally stronger Soviet tank formations they could count on powerful anti-tank defense. Finally, within their framework, effective interaction with the infantry was possible — meanwhile, Soviet tanks, often breaking through the first line of defense, simply left behind “uncleared” trenches and were steadily destroyed in its depth.

Likewise, the German riflemen went into battle with more effective support from field artillery and could count on an “honest” battle with tanks, unlike the almost defenseless Soviet armored vehicles.

What is the reason for this situation? The fact is that the Red Army even theoretically could not reach the German level of automobilization. "In 1941, in Germany, 333 thousand cars were produced, in the occupied countries 268 thousand, satellites of the Third Reich produced another 75 thousand cars." The Soviet car industry has produced a million cars for the entire pre-war period. In addition, Germany got great trophies - only in Dunkirk, the British expeditionary force force had to throw 75 thousand cars.

Equally illusory is the advantage of the Soviet artillery (37 thousand guns against 31 thousand). First, the Soviet guns were much less mobile, with all the consequences described above. Secondly, the artillery must shoot something - and the Germans had more accumulated ammunition. Thirdly, domestic anti-tank guns had their own specifics - as was shown above, the forty-skaters that received defective 1936-39 shells of the year could not effectively deal with medium-sized Wehrmacht tanks.

Now let's look at the Air Force. So, on June 22, 10743 Soviet aircraft opposed 4914 aircraft of Germany and the allies, including about 830 Messerschmidt fighters. What could the Soviet Luftwaffe really oppose aviation? It should be borne in mind that the USSR in aluminum production was several times behind Germany, which left an indelible mark on the face of the Soviet Air Force. Wooden cars, for example, all other things being equal are heavier than aluminum.

The most numerous of the modern fighters, the Mig-3, was lightly armed, but had record speed and good maneuverability ... at high altitude. However, most of the battles took place at low and medium altitudes. In addition, the plane burned very readily. The nearly all-solid Logg-3 was the product of a desperate attempt to save aluminum. The combination of the overweight design with a weak engine led to dubious flight performance and practically negated the value of the aircraft as a “fighter jet”. The old I-16 fighters, which were the most popular in the Soviet Air Force and made up 41% in the western districts, were inferior to the enemy in speed and altitude, and because of the habit of yawing - accuracy of fire. As a result, the real threat to the Luftwaffe fighters was represented only by the 399 Yak-1, but even they were noticeably inferior to them both in speed and altitude. The situation was aggravated by the lack of radio communications and the extreme shortage of trained crews.

An additional factor was the unsuccessful basing system. The airfields were located directly at the border - but not at all because it was part of the aggressive plans of the Red Army. It was just a new border and former Polish airfields, located at a standard distance from the border of the Commonwealth.

In general, no 22 puzzle of June, 1941 th does not exist. There was only, first, technological backwardness. Secondly, a purely quantitative preponderance of the German block, based on a much greater industrial potential. Thirdly, inadequate views of the military leadership on the scenario of the beginning of the war.

However, even if there were no last, the Red Army would inevitably lose the border battle, although, perhaps, with a less devastating result. One way or another, the bloodiest phase of the Great Patriotic War was inevitable.

Ctrl Enter
Noticed oshЫbku Highlight text and press. Ctrl + Enter
We are
About Stalin and KhrushchevList of destroyed the largest and most high-tech enterprises
Military Reviewin Yandex News
Military Reviewin Google News
71 comment
Information
Dear reader, to leave comments on the publication, you must to register.