Remember Vienna, remember the Alps and the Danube? .. 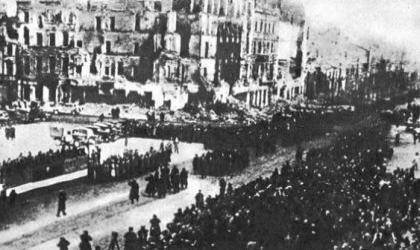 By the beginning of World War II, all of Europe was literally crammed with dictators: Pilsudski, then Beck in Poland, Smetona in Lithuania, Ulmanis in Latvia, General Metasas in Greece, Mussolini in Italy, General Anthony Carmon and Salazar in Portugal, Primo de Rivera, then Franco in Spain, Dolphus in Austria, the racist regime of Marshal Pétain in France, Ahmat Zogu in Albania, Marshal Antonescu in Romania, Pats in Estonia, Marshal Mannerheim in Finland, Admiral Horthy in Hungary, Tsankov, and then Tsar Boris in Bulgaria, Quisling in Norway, Ante Pavelic in Croatia, monseny p Tiso in Slovakia ...


Most of them became the Fuhrer in their states even before 1933, when Hitler came to power in Germany, uniting the European rulers to march on the East.

It seems to be not Belgium, the Netherlands, and Luxembourg that were not dictatorial and did not fight with the USSR. They would send the Soviet-German front from 90 to 110 thousand soldiers, but Sweden and Switzerland who formally declared neutrality together with Spain (the Blue SS division and air squadron) over 50 thousand volunteers. The last military unit manned by the Norwegians and the Danes (the Norland division) will be routed by the Red Army already near Berlin. The German author of the book “The Results of the Second World War” (1953) K. Pfeffer testifies: “Most of the volunteers from Western Europe went to the Eastern Front only because they saw this as a common task of the West ... Volunteers from Western Europe, as a rule, were attached to connections and parts of the SS ... "

The prominent English historian A. Taylor wrote about two “neutral” countries least of all dependent on Nazism, Switzerland and Sweden, that they “could bring Germany more benefits than if they were in the position of vanquished. Germany received iron ore from Sweden, precision instruments from Switzerland. Without this, she could not continue the war. ” Almost every third fascist projectile was made of steel smelted from Swedish ore, and almost all the necessary tungsten came from Portugal ...

Czechoslovakia, the former in 1930-ies. world exporter weaponsHaving 45 fully mobilized and well-armed divisions, without a single shot surrendered to the German group, which consisted of 30 divisions. But the factories of only one Czech concern Skoda from August 1938 (the capture of the Sudeten Germans) until September 1939 will give the Nazis the same military output as the British all the military factories in England. The Nazis will attack the Soviet Union, having in their 21 tank divisions of 5 divisions armed with Czech tanks.

The overwhelming majority of citizens of European countries collaborated with the Nazis, guided by both ideological and purely selfish considerations in the hope of profit on the rich expanses of Russia. And the Fuhrer actually led the European crusade against Soviet Russia. Germany’s ambassador to the Vatican, von Bergen, reported to Berlin 24 on June 1941, that “in circles close to the Vatican, they welcome this new phase of the war with known relief and follow its course with particular interest” ...

What is left over? Slavic Poland? Partly yes. But it is worth remembering that soldiers and officers who had passports of Polish citizens on 100.000 September 1 fought over 1939 in September in the Hitler army. Professor Richard Kaczmarek, Director of the Institute stories The University of Silesia, the author of the book “Poles in the Wehrmacht,” states that “about half a million passed through the German army during the war of the Poles” (not to mention the Home Army, which was subordinate to the government in London and often fought against the Red Army and partisans, rather than Wehrmacht). Only in 1942, the Poles made up 40-45% of the personnel of the Wehrmacht 96 Infantry Division, about 30% of the 57 Division, about 30% of the 11-division (together with the Czechs), about 12% of the 110 division ... From an interview R. Kaczmarek of the Polish Gazeta Wyborcza: “We can assume that 2-3 has millions of people in Poland who have a relative who served in the Wehrmacht. How many of them know what became of them? Probably a few. Students constantly come to me and ask how to establish what happened to my uncle, with my grandfather. Their relatives were silent about this, they got off with the phrase that the grandfather died in the war. But this is no longer enough for the third post-war generation ”...

The only European country that did not want to take part in the fascist madness that swept all of Europe was Serbia. The signing of the 25 March in Vienna by the Prime Minister Tsvetkovich of the Rome-Berlin-Tokyo axis by the Prime Minister, which provided for the transfer of the entire economy of Yugoslavia to Hitler with the right of free movement of German troops, caused an outrage of popular indignation in the Balkans. Two days later, the prime minister was overthrown, and the pact was terminated. In Belgrade and throughout the country, the population rejoiced, celebrating the victory. On the streets burned effigies of the overthrown premier collaborator. In Berlin, these events caused such rage that Hitler on the same day signed a directive with the code name "Punishment." The European press launched a frantic anti-Serb campaign, rushed to describe the "persecution of the German minority" in Serbia. Began the spread of fake photos, close-up showing the "refugees", called "victims of the Yugoslav terror." The invasion of the German forces and its satellites began with the 1940-day continuous bombardment of Belgrade, under which more than 2 thousands of people died. Although the Serbs shot down 18 bombers, the total tonnage of bombs dropped on Belgrade exceeded 40 tons.

Every person celebrating 9 on May Victory Day should know that this day brought the uprising of the southern Slavs closer. Thanks to the Serbs, the beginning of the implementation of the “Barbarossa” plan and the invasion of the USSR was postponed for a month, and as a result of the onset of the autumn thaw, the Hitlerite technology began to waste fuel (about a third), which slowed down the blitzkrieg; in the midst of the decisive battles near Moscow, Hitler was forced to redeploy some of the divisions so necessary for his generals on the Eastern front to the West - against the recalcitrant Serbs.

By the beginning of the Second World War, all authoritarian regimes in Europe were gigantic purulent boils on the body of European civilization. Of the two dozen (excluding “dwarf”) European countries that existed by June 1941, almost half - Spain, Italy, Denmark, Norway, Hungary, Romania, Slovakia (separated from the Czech Republic at that time), Finland, Croatia (highlighted and then from Yugoslavia) - together with Germany entered the war against Russia / USSR, sending their armed forces to the Eastern Front. Apart from the number of troops of these official allies of Germany, more than 1.800.000 citizens of all European countries fought in the Wehrmacht and the SS alone!

A general impression of who fought against Soviet Russia and how could be made up of prisoners of war in May 1945: Poles surrendered to 60280, French 23136, Croats 21822, Dutch 4729, Belgians 2010, Luxembourgers 1652, dates - 456, several thousand Czechs. This is only a part of captured from several European countries that seem not to have fought against the USSR. Suffice to say that, around 600.000, prisoners from the armies of Germany and its allies were released by the Soviet command directly on the fronts after appropriate verification.

In the ensuing titanic struggle, the Soviet people managed to defeat the authoritarian-fascist plagues that had grown into the body of Europe. However, it should not be forgotten that Nazism and totalitarianism are a product of European progressism and rationalism. No wonder the end of the war and the Nazi fascists, and their vassals from other countries tried to surrender to the British and Americans, but not the Soviet troops. So judge for yourself which regime is closer to the Nazis - Soviet or Western "liberal-democratic".

Although the war that began in June 1941 was a struggle for life and death between two ideological opposites - fascism and communism, for our ancestors this antagonism did not play any role. For them it was the Great Patriotic War. The war against the enemy who attacked the country. The war of survival. Holy war!

Ctrl Enter
Noticed oshЫbku Highlight text and press. Ctrl + Enter
We are
"New State" by Professor SalazarEnver Hoxha is the last Stalinist in Europe. Part of 1. Becoming a political leader
29 comments
Information
Dear reader, to leave comments on the publication, you must to register.