Win a victory and not lose it. 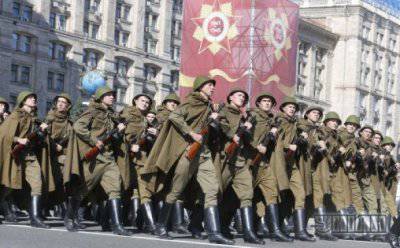 In the minds of people, the war ended on May 9, 1945, with the capture of Berlin. Just because it is so right, it should be so: they seized the capital, removed the enemy rulers who had survived the battles from power, and ... here it is, the world. Alas, it does not always happen.


The Battle for Berlin

Historiography, movies, memories of veterans taught us to think that the battle for Berlin was the final chord of the war. To the capital of the Third Reich, our soldiers burst from Moscow and Stalingrad, hoping to "finish off the beast in its lair." And on January 31, the Belarusian 1 troops captured a bridgehead on the western bank of the Oder in the Vistula-Oder strategic operation near the town of Kustrin. To Berlin remained only 60 kilometers. It would seem that one breakthrough, one, albeit the most difficult, battle, and the end of the war ... But by this time our troops had already exhausted, having completed about three weeks of fighting about 500 kilometers. Losses had an impact, the supply bases fell behind, and a German assault force was looming from the north, preparing to deliver a flank attack. And the attack on the German capital was postponed for two and a half months.

16 April The Berlin offensive began, and after five days, the first Soviet soldiers entered Berlin. But the fierce fighting for the city, where about a million German soldiers were concentrated, and the houses, streets, canals turned into fortifications, continued until the morning of May 2. It was 2 of May that the Berlin garrison capitulated, only a small part of the Nazis tried to escape from the city, but was destroyed or scattered.

In Berlin, a peaceful life was already getting better, but the German troops, despite the news of Hitler's suicide and the capitulation of the capital, continued to resist fiercely. And not just to the west of Berlin.

Even the Surrender Act did not stop fighting. The commander of the Army Group "Center" Ferdinand Schörner, executing the order of Hitler, given them a few days before suicide, decided to turn Prague into a "second Berlin", gathering about a million soldiers under his command. Schörner refused to believe in the capture of Berlin by the Red Army and the death of the Fuhrer, ordering the execution of everyone who would spread this information.

On May 5, an anti-German uprising broke out in the capital of Czechoslovakia, which was supported by one of the divisions of the ROA, General Vlasov. But since the leaders of the uprising could not guarantee the Vlasovites the status of allies, the betrayers twice betrayed them for the third time, leaving the rebels, who were doomed to defeat by the Nazis. Only a day and a half later, on May 9, Soviet forces broke into Prague Tankswho rescued the rebellious population. However, the battles with Schörner’s troops continued until May 14, until their remnants were defeated or left for the American zone of occupation.

Already after May 9, battles continued on the Puzliger-Nerung spit at the mouth of the Vistula, whose defense by the Poles in 1939 was the first heroic page of the Second World War. 11 May ended the defeat of the Courland boiler in Latvia. Only by May 15 had the destruction of the remnants of Army Group Center in Central Europe ended.

There could be no peace in Europe

The situation in March-April 1945, when the Red Army was only 60 kilometers from Berlin, was very disturbing to England. Such a successful Soviet offensive threatened the British plans for the postwar world order, in which London relegated to itself the dominant position in Europe. Despite the fact that the overwhelming majority of German troops fought on the Eastern Front, rendering the Anglo-French-American troops not the strongest resistance, the Allies did not move as fast as they wanted on the shores of Albion. And, although the borders of the occupation of Germany were approved in Yalta, the British were eager to be the first to enter Berlin, which would have diminished the role of the USSR in victory and, conversely, elevated their role.
The recently declassified English archives opened the most unattractive page of the activities of the English of those days. In April, British Prime Minister Winston Churchill ordered 1945 to develop a plan of operation that would “impose the will of the United States and the British Empire on Russians”. The operation was called "Unthinkable." It must be said, the name that most accurately describes the idea of ​​the British.

British planners, no less, planned on 1 July 1945, an Anglo-American-German military strike on the Soviet troops. The 47 of the British and American divisions, with the support of the German divisions 10-12, which were carefully preserved and armed by the British, without a declaration of war should have struck the positions of the Red Army. “They are elated ... They think the war is over. And the real war is just beginning, ”wrote Kennan, an adviser to the American embassy in Moscow, on May 9 in his diary.

The war was really planned serious. It was planned to overturn the Soviet troops who had relaxed after the Victory in northern Germany and to drive them to Poland by September. After this, the Poles, Hungarians, as well as other states that until recently were allies of Germany were to join the fighting. Using the overwhelming advantage in aviation, had to turn into massive ruins, like Dresden, the most important Soviet centers: Leningrad, Moscow, Murmansk. The British’s multiple advantage at sea guaranteed the security of the supply lines, and the deterioration of Soviet equipment (as the planners thought) ensured an early victory in the war, which was planned to end on the Arkhangelsk-Stalingrad line.

The date of the attack was not accidental. Back in Yalta, Stalin announced that the USSR would go to war with Japan 8 in August 1945, and already in June, our forces were moving from Germany to the Far East. But The Unthinkable was blown away by the unforeseen: at the end of June, Marshal Zhukov unexpectedly regrouped the Soviet troops stationed in Germany, thereby confusing the British with all the cards. The power of the Soviet technology that stormed Berlin, the “random” volley from the Katyusha on the positions of the allies on the eve of the end of the war gave rise to doubts about the success of the operation in the hearts of many allied generals. Strongly against the attack on the USSR, supported by the new American president Harry Truman, were the American military, who feared excessive losses in the war with Japan without Soviet support. As a result, the treacherous attack plan was sent to a secret repository, from which only a few years ago it migrated into the open access of the British State Archives.

The German Command signed the surrender on the night of May 7 in Reims. In this case, the Act was to enter into force in 23: 01 8 May. But the Soviet general Ivan Susloparov, who put his signature under him, acted at his own peril and risk. Immediately after that, Susloparov received a telegram from Moscow with a categorical prohibition to sign the Act. But the matter was already done, and the Soviet government immediately contacted the allies, protesting against the signing of the document, not by the top leadership of the German armed forces, but by secondary figures. The Allies considered the arguments of the USSR convincing and agreed to re-ceremony the next day, but in a more representative composition and with slight changes in the text.

8 May in 22: 43 Central European Time in the suburbs of Berlin, the commanders of the German armed forces signed the Act of the unconditional surrender of Germany - in the presence of representatives of the command force of the anti-Hitler coalition. The start date of the Act has not changed, so the surrender announced on the German radio the day before began almost immediately after the document was signed. Due to the time difference (in Moscow at the time of signing it was already 00: 43 9 in May) the end date of the war in the former USSR, Europe and the USA is considered differently. We have - 9 May, in the West - 8 May.

Immediately after receiving the news of the signing of the Act of unconditional surrender, on the same night, the Soviet government issued a decree on the celebration of 9 Victory Day as first peaceful day after World War II. Only a year later, a similar holiday appeared in other states. Naturally, with the date of the celebration of 8 May. In England, France and the USA, it is called Victory Day in Europe. And on May 9, Western Europe celebrates Europe Day. But it is dedicated to a completely different event: it was on this day in 1950 that French Foreign Minister Robert Schumann proposed the creation of a European coal and steel union, from which the European Union would later grow ...

The Ukrainian opposition, committed to hide the sin, to the influence of the ideology of the OUN (Bandera), today agitates the population of Ukraine to abandon the festivities on Victory Day and dedicate mourning for the dead to 9 in May. Like, the whole of Europe is doing this, forgetting about the victory over fascism. But it cannot be called anything other than lying, because in November 2004, the United Nations adopted Resolution No. A / RES / 59 / 26 - “Celebration the sixtieth anniversary of the end of the second world war. " In it, states, organizations and individuals are invited, in addition to celebrating its Victory and Liberation Days, annually also celebrate one or both of these days (8 and May 9), as a tribute to all the victims of the Second World War. So, since 2007 in London, along with commemoration of war victims, the magnificent Victory Day celebration with the participation of the royal family and veterans is held annually.

Calls for refusal to celebrate Victory Day are not as harmless as it may seem. By this step, the opposition denies Ukraine’s succession as a member of the anti-Hitler coalition and declares itself the heirs of Hitler’s allies, for whom our Victory Day is their day of defeat, which can only be celebrated with grief.

Well, let them grieve: they have something to grieve. And we will celebrate the anniversary of the first peaceful day after the most terrible war, be proud of our ancestors-winners and remember those who brought Our Victory closer, but did not live to see it.

Ctrl Enter
Noticed oshЫbku Highlight text and press. Ctrl + Enter
We are
About Stalin and KhrushchevWhat you didn't want to know about England
21 comment
Information
Dear reader, to leave comments on the publication, you must to register.