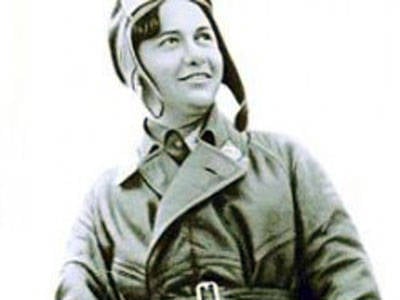 Baku of the 30s ... A parachute tower rises on Baku Boulevard, always surrounded by a crowd watching parachute jumps. The Baku Worker installed a tower in a favorite resting place of the townspeople. Since then, there have always been many young people. I must say that in Baku of the 30s, not only guys, but also girls were keen on flying business. The future heroes of the Great Patriotic War once began their journey into the sky with this tower, trying themselves for fearlessness and courage. Among them was the future first pilot of Azerbaijan, major aviation Leyla Mammadbekova, and the only combat pilot-Azerbaijani woman during the war, aviation captain Zuleikha Seidmamedova.


The first pilot of the East

Leyla Mamedbekova will fall a wonderful fate to become a legend during her lifetime, the first Muslim pilot in the whole East. She will prepare a whole galaxy of Azerbaijan pilots, many of whom will be active participants in the Great Patriotic War.

According to the stories of the pilot's son, Khanlar, after graduating from the flight school in Moscow, Leila returned to Baku. But here she faced a problem: they did not give her an airplane and offered a job as a librarian. Then she went to Mirdjafar Bagirov, the then first secretary of the Communist Party of Azerbaijan. And only after the intervention of Bagirov, on the second day, she got access to the plane.

The fate of the first Muslim pilots Leyla Mamedbekova in 30-s was made a feature film. It was the film “Ismet”, in which she took part as a stuntman, a performer of stunts in the sky. See it in the film can only be in the first and last frames of the feature film.

When the war began, Leila had four minor children, the last one was just born. Despite this, Leila decided to create his own group of combat pilots. The military enlistment office, however, despite its insistence, does not let the pilot go to the front. Women with babies were not supposed to be taken to the front. But Leyla Mamedbekova still manages to get permission to open training courses for paratroopers and paratroopers. During the war years, she prepared hundreds of paratroopers and about 4 thousands of paratroopers to throw into the rear of the enemy. Two of them, Adil Guliyev and Nikolai Sheverdyaev, subsequently became Heroes of the Soviet Union.

While Leila Mamedbekova was still alive, poems and films were devoted, including at the Azerbaijantelefilm studio and the Lider TV channel. And in 2009, in honor of its 100 anniversary, “Azermarka” was issued a postage stamp with the image of the first female pilot in the East, on which Leila is depicted in a flying helmet.

The first and only combat pilot-Azerbaijani during the war was aviation navigator Zuleikha Seyidmamedova. In the 1932 year, while studying at the 1 course of the Oil Academy, she simultaneously worked at the flying club. According to the story of Seidmamedova herself in the film “Zuleikha” from the film trilogy “Heavenly Brothers” by Nazim Reza Israfiloglu, it was a student club of aeronautics. Training flights were conducted from a dedicated site in Zabrat. Since 1936, she is an instructor-pilot of the Baku Aero Club. In the 1938 year, after graduating from the Azerbaijan Industrial Institute, she received a degree in engineering geology. Soon, Zuleikha made her main choice: she decided to enter the faculty of navigators of the Zhukovsky Air Force Academy.

At that time, girls were not taken to this department. However, she decided to fight to the end. Zuleikha turned to Klimentiy Voroshilov, and within half a month she received an answer: she was made an exception and allowed to study as a navigator!

Since childhood, Zulia loved height. In her memoirs she wrote: “I have loved height since childhood. Every summer my parents and I went to the suburban village of Shuvelyany, to the country. There were growing fig and mulberry trees. I climbed to the highest. I liked to look down on the flat roofs of houses, gardens and vineyards, on the sea, trimmed off the coast with white lace surf. ” As a child she woke up early in the morning from the hum of the engine, ran out into the yard and, covering her face with the palm of the sun, looked at the sky for a long time, watching the plane, trying to imagine a brave man flying high above the ground, alone in the endless space. Who is he who dares to soar above the birds?

Her first impressions of what she saw for the first time of this aircraft are also interesting: “For the first time I saw a plane very close to me on one of the April sunny days when a physics teacher organized a trip to the airfield. The plane seemed amazingly beautiful, incomprehensible to me! Living winged creature! "

Later, having learned about the decision of her daughter to become a pilot, Zuleikha's mother would exclaim in surprise: “To fly in the sky - is this a women's business?” But nothing could turn Zul away from her cherished dream of becoming a class pilot.

So, in May 1941, Zulya, having graduated from the Military Academy, did not even suspect that a terrible war would begin in less than a month.

From the very beginning of the war Zuleikha served in the regiment, which very soon will be re-trained in the fighter. Later, on the orders of Stalin, the creation of a women's 586 Fighter Regiment began, headed by Major Marina Raskova (in the future - a hero of the Soviet Union). Zuleikha was invited to join the regiment. She will fight the entire war in this regiment in the position of deputy commander.

There was not a single night so that the female regiment flew into the dangerous sky, the war hero Z. Seidmamedova tells in the film. Zulia, as they would gently call her in the regiment, will fly with Marusya Kuznetsova: one will be in the attack, the other - to cover. The pilots of the regiment on fighters designed by Yakovlev covered large industrial centers and railway junctions from attacks by German scorers, guarding bridges across the Volga, Don, Voronezh, Dnieper, and Dniester.

Not a single object guarded by the regiment was harmed by enemy attacks, although the Germans practically bombed cities around the clock. Engineer-navigator Zuleikha Seidmamedova made more 500 sorties, participated in more than 40 air battles.

One day Zuleikha summons leadership. Going into the office, she saw in front of her a rather respectable-looking German prisoner, as it turned out, a general.

Pointing at Zul, they explained to him that this girl had shot down his plane. The German has long been at a loss ...

There was a case when she was instructed, along with several other pilots, to cover the plane flying to the southern part of the country, on board of which there was a high-ranking official. As it turned out later, it was Joseph Stalin himself.

After the war, she was in various senior positions, including for over 20 years, she was Minister of Social Security. The composer Tofik Kuliev dedicated a wonderful compatriot to the song, which was performed by Rashid Behbudov himself. Unfortunately, she did not succeed in seeing the film dedicated to our pilots. She left the world shortly before the completion of filming ...

In order to perpetuate the memory of our heroic pilots of the Great Patriotic War, the tireless Azerbaijani documentary film director Nazim Reza Israfiloglu shot the first documentary film trilogy in Azerbaijani cinema under the general title “Only heaven above the sky” in 1995. It includes three films: “Leila”, “Zuleikha” and “Heavenly Brothers”. Through all three films, the song “About Pilots” by Tofik Babayev, performed by our prima singer Flora Kerimova, is a keynote. Unfortunately, this song is almost forgotten, and it cannot be heard even on holidays on a corresponding occasion.

Ctrl Enter
Noticed a mistake Highlight text and press. Ctrl + Enter
We are
Pilots of the Soviet East. In memory of women participating in the Great Patriotic WarMyths of the Great Patriotic. Did Stalin have prostration in the first days of the war?
23 comments
Information
Dear reader, to leave comments on the publication, you must to register.