All Europe fought against the USSR 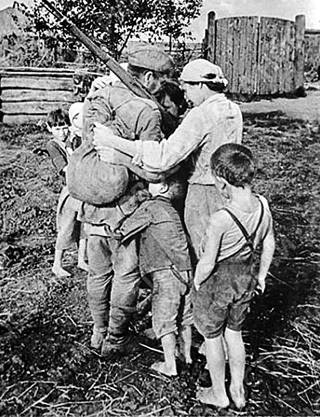 Soviet soldier left to fight for his native land, and eventually cleared the whole world of the Nazis

The farther into history this day goes, the more gaps in the memory of descendants become. The voices of madmen are louder and louder, trying to convince the whole world that the contribution of the USSR to the victory over fascism is minimal. Silent that almost all of Europe diligently contributed to the strengthening of Hitler’s army, and not to its defeat.

The countries occupied by Hitler have always exposed themselves as victims. Like, evil invaders came, what could we do against them? It was impossible to fight. They were forced to work on pain of death, they starved and tortured. However, in fact, it turns out that in the West under the Germans everything was not so bad. It was our troops that, retreating, blew up industrial enterprises so that they would not get to the enemy. Partisans and residents of the territories occupied by the fascists staged sabotage and sabotage. In most of the occupied European countries, workers worked diligently, getting paid and drinking beer after work.

In 1938, the balance of power in the German and Czechoslovak armies was comparable. And technically the Czechs were well equipped: they provided 40 percent of world trade weapons and military equipment, and their Tanks were the best in Europe. And this country surrenders to Hitler without a single squeak. In addition to trophies, Germany has at its disposal well-known factories: Skoda, CKD, Poldi, Zbroevka. And the complaisant Czechs are beginning to work diligently for the Nazis. Small arms, armored vehicles, self-propelled guns, Czech-made aircraft make up at least a quarter of the entire armament of the fascist army. Plus cars, ammunition and parts for the V-2 missiles. 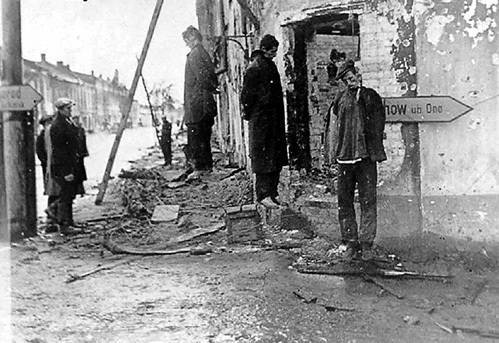 Life in the occupation on the territory of the USSR ... (photo privetsochi.ru)

“Without the Czech military industry and Czech tanks, we would not have four tank divisions, which would have made an attack on the Soviet Union impossible,” said Helmut Ritgen, lieutenant colonel of the Wehrmacht armies.

The workshops of the arms factories stood only 5 May 1945 of the year. And for the whole war not a single attempt to sabotage or sabotage! On the contrary, the designers are modernizing weapons and are struggling with their Austrian colleagues for the right to develop and implement an all-terrain vehicle designed for impassable Russian forests and wetlands. And why not try, if the owner is satisfied, and gives those who work well, at elevated rates.
“The Czechs put at our disposal all the necessary information about their tanks,” recalled German lieutenant colonel Iken with gratitude. - Czech officers were confident that their vehicles fully meet the needs of the Wehrmacht. And we have never had to deal with actions of sabotage or any kind of resistance. 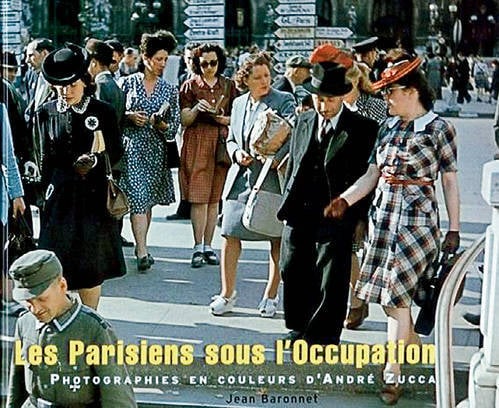 ... and in France it was strikingly different (on the photo is a poster of the photo exhibition "Parisians in Occupation")

In the German war only guns in the price

Equipped with French flame-throwing tanks, the fascist company was particularly distinguished during the capture of Sevastopol. Armored vehicles, howitzers, mortars, anti-tank guns, ammunition were regularly received from Wehrmacht factories in France. The largest howitzer was produced here: shells weighing 1654 kg, released from it, crumbled the districts of Leningrad. About 10 000 tanks, self-propelled guns and base machines for their creation put Hitler France and the Czech Republic. Allies of the Third Reich - Italy and Hungary gave half as much.

“Industry and the economy continued to work rhythmically, at the Renault enterprises trucks for the Wehrmacht steadily descended from the conveyor,” reported Otto Reille, assistant head of the German military intelligence. - The French, without any coercion, made products for our military industry in large volumes and without claims.

Assembled in the Czech Republic and France, “frames” hung over our positions, telling enemy gunners where to aim better. Knock them down was very difficult

French aircraft engines were on the German anti-tank attack aircraft Henschel-129 and on the Messerschmitt-323 transport aircraft, which raised seven times more cargo to the sky than any others, it even carried armored vehicles. 750 from 894 Focke-Wulf-189 double-hulled artillery spotters - the famous “frames” that caused a lot of trouble to our troops — got off the assembly lines of factories in Bordeaux and Prague. The Peugeot and Citroen factories also worked for the Hitler army: at that time the French auto industry was more powerful than the German one. Its products made up the fifth part of the fleet of the Hitler army.

Yes, there was a resistance movement in the country. However, the underground heroism is somewhat lost against the background of the scope with which France assisted the invaders. We have heard a lot about 72 hero pilots from the Normandy-Neman air regiment. And almost nothing about the 200 000 French volunteers who fought on Hitler's side. 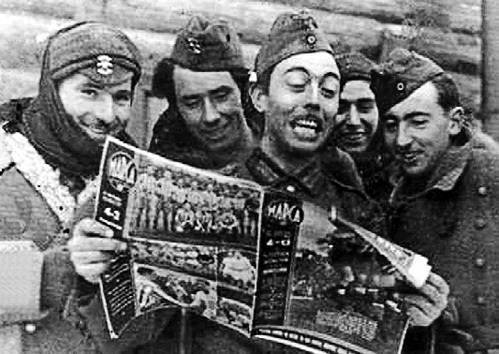 Almost 20 000 volunteers from Spain, formally observing neutrality, fought on the side of Hitler. A medal was made especially for them, which the veterans continued to wear after the war

Strategic raw materials, weapons, materials, equipment - united Europe provided the Nazis with everything they needed. Including human resources: around 2 000 000 people volunteered for the Hitler army. And often such fighters were more brutal than the Germans.

“There are several sorties in my memory when the bomb was flown to the rear,” Boris Rapoport recalled, who was the navigator of the Po-2 night bomber during the war. “In the summer of 1944, the militants of the Polish Home Army cut out our hospital in the city of Minsk-Mazowiecki, killing 200 the wounded and the entire staff. After the attack, the Poles took refuge in the forest. So we were attracted - to bomb this unfortunate forest.

In total, according to experts, 350 000 000 fought against the USSR. It does not matter if they fought with weapons in their hands or worked hard in mines and factories. 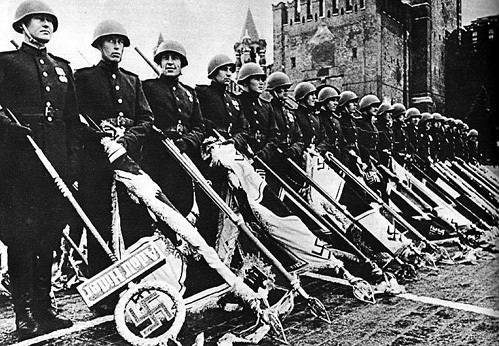 In 1945, hardly anyone would dare to downplay the role of our army in the victory over Nazism

Who is war and who is mother

The banks of neutral Switzerland kept the finances of the Nazi government, as well as gold bars - 75 percent of the captured gold. Including remelted from teeth torn from victims of concentration camps and ornaments removed from them. The Swiss insurance companies also made a profit: before 1944, they wrote 206 000 insurance policies in Germany. Business also did not lag behind: precision instruments, telephones, radios, watches were supplied to the fascists regularly. And gas for use in concentration camps came from the laboratories of the chemical company Ciba (in 1996, it became part of the famous pharmaceutical giant Novartis). Those prisoners who did not get into the gas chambers could get to the Swiss factories. One of the companies that used slave labor is the well-known to us now Nestlé.

However, there were noble people in Switzerland. For example, doctors of the Red Cross, voluntarily sent to the battlefields. But they helped the wounded of one side - not ours. And although the country took over 60 000 civilians who fled from Germany and Austria, 20 000 Jews were extradited to the Nazis and subsequently destroyed in concentration camps.

And the trial of the underground workers from Geneva, who collaborated with the participants of the French Resistance, looks quite stunning. The term, albeit conditional, they received for the "violation of neutrality"! However, to the neighbor of one of the heroes who denounced the Nazis to them, there were no complaints.

Sweden, which also declared neutrality in World War II, supplied Germany with iron ore and steel: a third of German munitions and weapons was made from Swedish raw materials. In the period 1941 - 1943. it provided its territory for the transit of Nazi troops, weapons and cargo. And the Swedish king Gustav V in a personal letter thanked Hitler in October 1941 for defeating Bolshevism.

* A third of Japanese schoolchildren are confident that the atomic bomb on Hiroshima and Nagasaki dropped the Soviet Union. 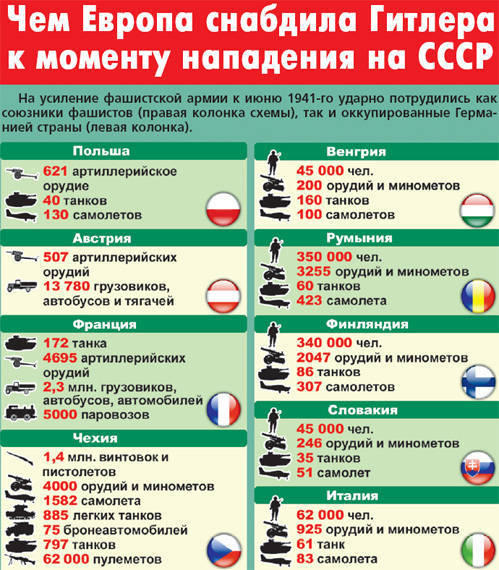 The occupation did not become for the inhabitants of Paris time of hardship and deprivation. Judging by the photographs of those years, they felt quite comfortable. Social life in the French capital continued to seethe. Despite the Nazi flags hanging on state institutions, and crowds of people forced to wear yellow stars on their clothes.

French explorer Patrick Boisso in his book “1940 - 1945. Erotic years "describes the" horizontal cooperation "Parisian women with the Germans. The Hitler army, having occupied the city, requisitioned all the brothels for their own needs. But this is not surprising, but the fact that French women lined up to serve the invaders. In an effort to please customers, they learned German and dyed their hair black to create an exciting contrast with Aryan blonde. Created a home comfort detached from the home of the military. In gratitude, the command allowed the staff and visitors to the brothels not to comply with the curfew. 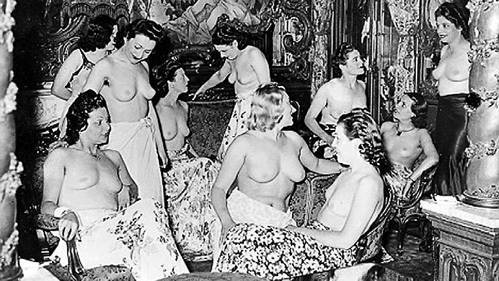 With the arrival of the Germans, the number of "employees" of brothels has increased six times

The fee for visiting elite brothels, where, for example, Hermann Goering visited, was comparable to the weekly salary of a high-ranking official. Somewhere there was blockaded Leningrad, concentration camps with gas chambers, pain, hunger, death. And here the loving French women served champagne in the old glasses to the Nazi leadership, the freshest cakes on silver trays, delighted the ear with classical music. And with tears they escorted their clients to the Eastern Front.

“These were the best years of my life,” recalled Madame Fabienne Jamet, manager of one of the elite brothels, when half the world was drowning in blood. - I have never spent time so cheerfully and carelessly. The nights during the occupation were fantastic!

Ctrl Enter
Noticed oshЫbku Highlight text and press. Ctrl + Enter
We are
About Stalin and KhrushchevWhat you didn't want to know about England
Military Reviewin Yandex News
Military Reviewin Google News
112 comments
Information
Dear reader, to leave comments on the publication, you must to register.