6 May 1715 in Russia published the first "Military Article" 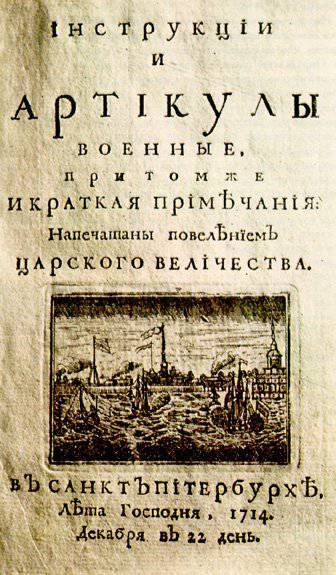 6 May 1715 was the first military criminal and military procedure code - “Military Article” - issued in the Russian state. It was designed by Tsar Peter I during the creation of the regular army. The military article of Peter I of 1715 consisted of 24 chapters, which were divided into 209 articles (articles) and included in the second part of the Military Charter. The military article was valid until the reign of Emperor Nicholas I, when the Code of Laws of the Russian Empire was introduced.


The military's article contained the basic principles of criminal responsibility, the concept of crime, the purpose of punishment, the list of military crimes and set the penalties for them. It also contained a provision on necessary defense and extreme necessity, a list of mitigating and aggravating circumstances.

The military article was borrowed from foreign sources, first of all the Swedish articles of Gustav Adolf were used in their later processing of 1683 (under King Charles XI). True, significant changes were made in the system of punishments, they became more severe, and in the defining part, and interpretations were added for each article. In addition, other European legal documents, imperial German laws, Danish and Dutch statutes, and ordinances of Louis XIV were used in the compilation of the article. Thus, the Military Article was actually a compilation of various European sources. It was prepared by several persons, among whom was the king and cabinet secretary Makarov.

A crime according to the Article was a socially dangerous act that caused harm to the state. A criminal was a person who violated the law, broke the prohibitions established by law. Crimes were divided into intentional, reckless and accidental. When committing intentional or reckless crimes, criminal liability was imposed. The crime was divided into stages: intent, attempted crime and a completed crime. In some cases, in particular for state crimes (an attempt on a monarch, insult, revolt or treason), the law established the punishment for intent. The attempted crime could have been completed and unfinished. The objectives of the punishment were intimidation, isolation of the offender and compensation for damage.

The military's article was, first of all, intended, as its name implied, for the military and was to be used by military courts. Their jurisdiction included persons serving the armed forces. The Article was applied in general courts, as a collection of criminal law.

The military article contained the following types of crimes:

- Against the faith (chapters 1,2). The group of religious crimes included blasphemy, idolatry, witchcraft, violation of the order in the administration of church rituals in the army, church revolt. Punishment relied secular, up to the death penalty.

- State (political) crimes (Ch. 3, 16 and 17). Political crime was treason, armed rebellion or indignation against the sovereign, the plan to kill or capture the monarch, insult the king word, condemn the actions or intentions of the king, secret negotiations with the enemy, opening a password, transferring information about fortifications.

- War crimes (Ch. 4 - 15). They included evasion of military service, desertion. Experienced soldiers were punished with a whip and sent to galleys who had served for less than a year — punished with gauntlets. Soldiers who had voluntarily appeared, deserters were punished more gently and left in the army. Flight from the battlefield was punished by death, while escaping an entire military unit officers were punished. Most severely punished for looting, surrender of fortifications, fortresses. However, the punishment was mitigated or canceled if ammunition, food ran out of the fortress, there were no people to continue protection. Punished for evading military service, insubordination to military discipline, violation of the rules of guard duty, improper treatment of prisoners.

- Official crimes. This group included bribery, embezzlement, abuse of power for the purpose of scrape. The punishment was the gallows. Also official misconduct related to non-payment of taxes, disobedience to the authorities, refusal to perform official duties.

- Crimes against order, management and court. Breaking and destroying decrees, perjury, false oath. They punished cutting off two fingers and penal servitude. Fake stamps and documents. Counterfeiting, unauthorized chasing or admixing of other metals to a coin, was punished by burning. Reducing the weight of money was punished by deprivation of honor and confiscation of property.

- Crimes against decency (public order and peace). Harboring criminals, the maintenance of dens, fights, riots and suspicious gatherings, misappropriation of false names and nicknames with the aim of causing harm, singing obscene songs and pronouncing obscene speeches. Punished, mostly bodily, in some cases, the death penalty.

- Crimes against the person. Murder was punishable by death by beheading. Interestingly, suicide was added to the murder. The suicide was supposed to be dragged through the streets and buried in a “dishonest” place. Injuries, mutilation. In particular, for hitting a knife, the criminal was nailed for an hour with a nail to the board, and then punished with gauntlets. Insult by action: who struck his cheek, the executioner also beat his cheek in front of the formation; took out the sword, but not hit, cut off his hand. For insulting the word punished six months in prison. The slanderer was punished for the crime in which he accused an honest man.

- Property crimes (Ch. 21). Mere theft (up to 20 rubles) was punished with gauntlets, self-mutilation and hard labor. The mitigating circumstances were petty theft, theft due to the difficult financial situation and hunger. A qualified theft was considered theft with a sum of more than 20 rubles, 4 times, during a natural disaster (fire, etc.), from a military arsenal, a guard duty place, from a soldier or officer, from a church. Punished by death - hanging or wheeling. For the robbery committed without weapons corporal punishment was relied upon, the death penalty was in arms. The night thief could have been killed on the spot, as he could have penetrated with the aim of killing. Intentional arson was punishable by death, arson through negligence - compensation for damages. Hiding a find was equated with conscious theft. Transferring the discovery to the authorities should have received a third of its price. The non-return of the property deposited was considered theft.

- Crimes against morality (sex). The rape of a young man or a man (sodomy) by a man was punished with death penalty or a reference to galleys. Banefulness - corporal punishment. Rape - the death penalty or the eternal reference to the galleys. Adultery - corporal punishment, temporary hard labor, etc. (depending on the circumstances of the case). If the spouse forgave the traitor, the punishment was softened. Heresy punished by the "church rules." Incest (incest) - the death penalty. The birth of an illegitimate child - the culprit was to contain the mother and child. In addition, church repentance and imprisonment were provided for.

The main types of punishment were the death penalty, corporal punishment, urgent and indefinite exile, hard labor, confiscation of property, imprisonment and a fine. The death penalty was divided into simple - hanging, shooting, beheading and skilled - wheeling, quartering, burning, pouring the throat with metal. Corporal punishment was subdivided into painful — beating with whip and gauntlets, and self-inflicting — cutting off parts of the body (fingers, hands, ears, nose), applying stigma. Punishing with hard labor, they could send them to galleys, to build fortifications and enterprises.

For officers, there were special types of punishment: temporary or permanent resignation from service; deprivation of rank, demotion in the ordinary; arrest; deprivation of vacation; It was considered the most severe and shameful punishment - defamation or civil death, that is, the person lost legal capacity. Confused was considered to be expelled "from among good people and faithful", could not act as a witness, file a lawsuit, for any crimes other than murder committed against the condemned, it was not supposed to be a criminal punishment. In 1766, this punishment was replaced by deprivation of rights, that is, the restriction of certain elements of legal capacity, and not their complete abolition.

Ctrl Enter
Noticed a mistake Highlight text and press. Ctrl + Enter
We are
Mexican warriors, eagles and jaguar warriors against the Spanish conquistadors. Who wrote us about them? (part three)297 years ago in Russia was published military article
5 comments
Information
Dear reader, to leave comments on the publication, you must to register.