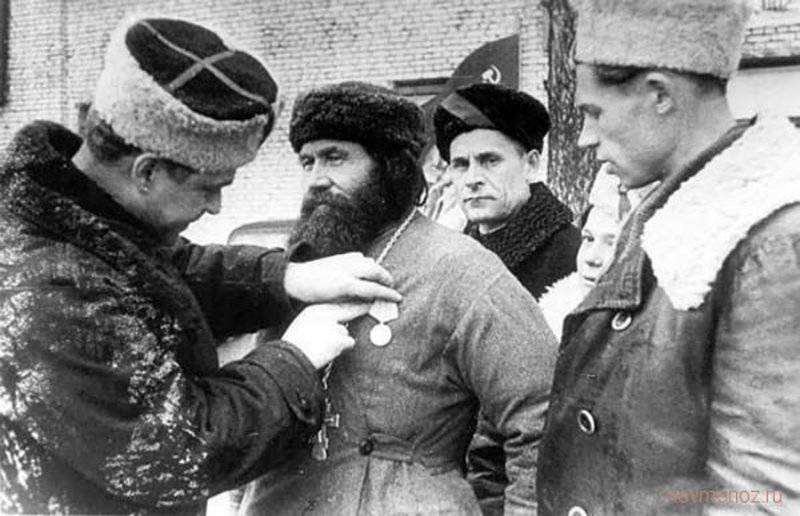 As clergy participated in the partisan movement


This year, Easter falls on the May holidays and almost coincides with the Victory Day. With the beginning of World War II, the priests shared the fate of their parishioners with a full measure.

At dawn 9 October 1943, fascists broke into the parish church of the Belarusian village of Khoyno. Priest Kosme Raih was ordered to be exposed, taken to the police station, searched. The officer gave the documents and the clock to the translator. “You won't need them anymore,” he smiled. And two soldiers-Czechs led the father to be shot.

... Archpriest Cosma Raihna was a hereditary priest. His father with a cross and Gospel sailed on Russian military ships and died from wounds received in the Battle of Port Arthur. The German occupation found the archpriest and his large family - and he had seven children - in the Pinsk district of the Brest region and immediately made a choice.

The question of whom to obey was far from being intrachurch, and the prayer “for our country, its authorities and its army” acquired a political meaning under occupation.

The occupation authorities demanded to pray "for the liberation of the country by the Russian and victorious German army." But Father Cosmas read the canonical prayer every time. And when they reported on him, he said that he had forgotten himself, read by inertia.

No, Father Kosma served not godless authorities, but his flock, the Orthodox people, on whose shoulders a heavy burden of war fell.

These people flowed day and night to the east along forest and field roads — the refugees, the wounded, the encirclement, and mother continually baked bread, cooked potatoes, helped with clothes, shoes, and medicines. The wounded received communion, asked for prayers for fallen comrades, for themselves and loved ones.

After the traditional Easter service, Father Cosmas announced the collection of gifts for children and partisans. A few days later, shedding tears, he buried the family of those who had been shot and burned in the nearby village of Nevel. Then he went to the remote village Semikhovichi - the base of the partisans - and in a small church, which, having lost his temper (God is his judge), the young priest threw, communion of the sick and wounded, baptized the children, funeral the dead and the dead.

As the teachers went to the ghetto with students, as doctors took death along with the wounded, so the priests shared the fate of the parishioners.

The parish priest John Loiko publicly blessed the sons of Vladimir, George and Alexander as partisans. "My weapon on the enemy, the holy cross, mocked by foe, and the word of God, and you be God-preserved and honestly serve the Father-in-God. " Father John punitive burned along with parishioners in the church. After the war, an obelisk was installed on the site of that terrible conflagration, where at first the name of the priest was, but then for some reason it disappeared.

The priest Nikolai Pyzhevich, a friend of Kosma's father, helped the wounded Red Army men, was in good relations with the partisans, and even distributed leaflets. Reported In September, 43-th punitive punched in Staroye Selo. The father jumped out the window and had already disappeared into the forest, but, looking back, he saw his house, where his wife and five daughters were left, lumbering with boards and putting straw over it. “I'm here,” he shouted. “Take me, I ask God, pity the innocent children ...”

The officer kicked his boot to the ground and shot him point-blank, and threw the body of the priest into the already burning house. After some time, the whole village was completely destroyed, and its inhabitants were burned in the temple.

In the summer of 1943 of the year, to the commander of the partisan formation, Major General V.Z. Korzh tearfully addressed the relatives of the deceased ... the police. No one, they say, from the priests agrees to read the funeral of the deceased, would you send your partisan father? Archpriest Alexander Romanushko served in the detachment then. Accompanied by two partisan machine gunners, he appeared at the cemetery. There were already armed policemen. He put on his clothes, was silent for a while. And suddenly:

- Brothers and sisters! I understand the great grief of the mother and father of the murdered. But not our prayers deserved in the tomb presenting. He is a traitor to the Motherland and a murderer of innocent old men and children. Instead of eternal memory, we all - he raised his head high and raised his voice, - utter anathema!

Gathered numb. And the priest, approaching the policemen, continued:

- To you, misguided ones, I appeal: before it is too late, redeem your guilt before God and people and turn your weapon against those who destroy our people, bury living people in such graves, and burn temples alive in churches and temples ...

In the home group, Father Alexander led almost a whole detachment, and was awarded the Medal "Partisan of the Patriotic War" 1 degrees.

... And on October 9 1943, two soldiers-Czechs led to the shooting of Archpriest Kosma Raynu. Near the church he fell on his knees and prayed earnestly. He did not remember how much time had passed, but when he rose from his knees, he saw no one near him. Having crossed himself, the priest with prayer moved towards the bush. And then rushed headlong into the saving forest.

After there was a partisan camp, a meeting with his sons. Together they won back from the fascists mother, which the Germans with other partisan wives and children wanted to send to a concentration camp.

The whole family of the parish priest Raihna managed to gather at the festive table only in 1946 year.

His last years, Cosmas Raina spent in the village Olgino near St. Petersburg, together with his mother and daughter Angelina, who worked here as a district doctor. He was buried in the Seraphim church at the altar. The eldest son Peter also departed into another world. Otpartisan and having won in the army, he then served for many years in the rank of priest in Belarus, Moscow, the Moscow region, was abbot of Orthodox churches in Alexandria and San Francisco. Pavel was also a priest, but he was removed from his post by the communist authorities, and for his vagaries - no one wanted to hire a former priest - he almost fell behind bars. Rescued guerrilla awards. He could no longer priesthood, and for many years he led the parish council in the temple where the ashes of his father rest. He told me about partisan priests. We talked a lot about it. He gave me his book, published in small editions. But, unfortunately, on my next visit to St. Petersburg, I did not find him in the church anymore ... He was buried here, at the Seraphim cemetery.

Ctrl Enter
Noticed a mistake Highlight text and press. Ctrl + Enter
We are
Our memory. Five steps along the Brest FortressMilitary priest father Ciprian Peresvet
60 comments
Information
Dear reader, to leave comments on the publication, you must to register.