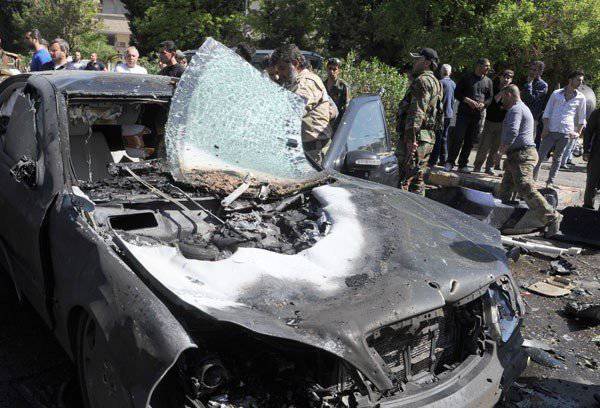 An Attempt against the SAR Prime Minister


29 April in the morning in the metropolitan area Mezze thundered car bomb explosion. At this time, Syrian Prime Minister Vail Al-Khalki drove along the Mezze motorway.

The explosion killed 8 people, several dozen injured. The head of government himself, fortunately, was not injured. Killed one of his bodyguards. Dozens of cars and buses that were passing by were hit.

The attack occurred near the school and kindergarten. To try to kill the chairman of the Council of Ministers, the bandits rejected conscience - they were absolutely not worried about the fate of the children. This is where the image of the so-called “opposition”, which is at war with the Syrian people, manifests itself.

Syrian Prime Minister Vail Al Khalki simultaneously heads a government commission to implement a political program to resolve the crisis through dialogue. The Commission is actively involved in the preparation of a national dialogue - it holds meetings and consultations with parties, movements, and trade unions.

It is clear that any activity aimed at political settlement of the situation in Syria is hostile to the goals and aspirations of terrorists, and especially those who support them from abroad and use them in their own interests. Therefore, this attempt was organized - to try to thwart the efforts of the Syrian leadership in the peace process. But their plans failed - the attempt failed.

It should be noted that in recent days the situation in Damascus has become much calmer. Although the attacks and mortar attacks continue. In particular, 28 in April in the Barze district was a terrorist attack against a Damascus utilities employee - a bomb was laid under the bottom of his car, as a result of which he was wounded and died soon after. On the same day, gangsters bombarded the Abbasiinov square, several people were injured.
But if you compare the situation with a very recent period, when murderous mortar shelling of buildings in the city center — the information agency SANA, the Opera House, the University of Damascus — which killed dozens of people — took place every day, it is clear that the criminals were driven away far from the capital. The army conducted a number of very successful special operations in the suburbs. Dareia was freed, militants' attempts to penetrate from the Dzhobar area were prevented, the village of Al-Uteiba was cleaned of terrorists.

The Syrian soldiers also won several local victories in the province of Homs, near the border with Lebanon. One of the radical extremist sheikhs even called on the Lebanese to come to the aid of the “opposition”, trying to stir up a war between Syria and Lebanon. Few militants responded to the call, a number of penetration attempts were repulsed by Syrian border guards.

In the West, they began to seriously fear the complete defeat of the rebels. Therefore, in order to organize a new round of escalation of the conflict, the United States and its European allies once again raised the topic of chemical weapons. A new wave of information hysteria about this begins.

US Secretary of Defense Chuck Hagel at a press conference in the city of Abu Dhabi, citing some intelligence data, said that Syria used sarin. But where it was and when, whether it led to the victims - Hagel did not specify.

The American masters were immediately supported by the British puppets. Immediately after this statement, the British Foreign Office, Hagel, made a statement that the British intelligence services also had "limited information" that the UAR authorities used chemical weapons.

I remember the situation with Iraq, when the United States to the whole world argued that Baghdad has chemical and even nuclear weapons. Then, US Secretary of State Colin Powell shouted to the UN that these weapons were a danger to the whole world. But, after the “democracy” rink rolled Iraq along with hundreds of thousands of people, no weapons of mass destruction were found. This was explained by the "bad work" of the CIA, which gave the wrong information. But the Americans don’t think of bringing any apologies to the Iraqi people, although many relatively honest military and journalists already repent of having participated in this dirty anti-Iraq war, informational and real.

Following the defense minister, the White House spokesman, John Carney, and Obama himself joined the anti-Syrian provocation, saying that military intervention (that is, in precise words, aggression) is not excluded.

On the direct question of whether there is clear evidence that Syria used chemical weapons, Obama's vote was forced to admit that such intelligence is not enough.

Syria itself, of course, completely rejects such accusations. The UAR Information Minister Az-Zoubi, while visiting Moscow, stated that his country was ready to invite Russian specialists to investigate this issue, especially the incident when chemical weapons were used by the so-called “opposition” in the Khan Asal district of Aleppo Province . It happened 19 March 2013 of the year, and the Western forces in the UN did everything to thwart the investigation of this war crime by the militants.

The minister added that there is every reason to assume that this chemical weapon was received by terrorists from Turkey. The area from which the rocket was launched is occupied by militants and is located near the Turkish border. In addition, the military equipment used at the launch of the rocket has Turkish markings.

However, the so-called "opposition" is afraid of investigating his crime. Speaking against sending Russian specialists to the area, representatives of these collaborators said that Russia is the main supplier of weapons to the Syrian regime and therefore does not have a status allowing it to conduct an investigation. ”

Speaking dolls of this “opposition” are silent about one thing: that even if we assume that Russia supplies weapons to the legitimate Syrian state, then Western countries, including the United States, no longer hide their help from the militants. Consequently, they cannot conduct such an investigation, for they are not a neutral and unbiased party.

Another hysteria around the Syrian chemical weapons is associated with the failure of the conspirators' plans to wage war with someone else’s hands — the bloody hands of mercenaries. They suffer a military defeat - and therefore their masters focus on the information front.

Ctrl Enter
Noticed a mistake Highlight text and press. Ctrl + Enter
We are
Yasinovataya: difficult history of one kindergartenPhoto report: how Chinese bodyguards are trained
43 comments
Information
Dear reader, to leave comments on the publication, you must to register.