New Tavor caliber 7,62 millimeter. Why is the old cartridge relevant?

April 30 2013
111
There has long been information that the designers of IWI are planning to create a version of the Tawor machine gun in the bullpup arrangement chambered for 7,62 caliber, since 5,56 does not meet the requirements currently imposed on arms. Since the people who deal with this issue are not stupid at all, it’s quite logical to develop this topic and once again talk about what is better than 7,62 or 5,45, 5,56. Though at once I will make a reservation that to say that this is better, but this is worse without reservations is impossible. In general, the topic is quite interesting, since it is the ammunition that defines the main characteristics of the weapon. 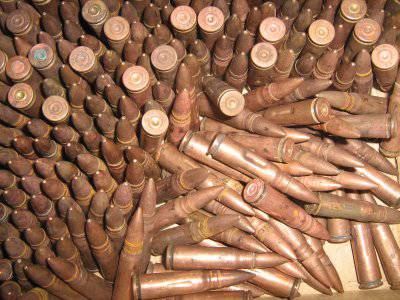 For the transition from 7,62 to 5,45, we need to thank not only the NATO countries, for whom domestic production has chased. In fact, Fedorov was the first to suggest that the caliber be reduced, and it was still in the late thirties, that is, when the intermediate cartridge was only in the plans, and far enough at that. Even then, Fedorov proposed an intermediate caliber ammunition equal to 6-6,5 millimeters, that is, at that time we could get far ahead, well, of course, with a normal approach to designing ammunition and no one would know about 5,45 at all, but did not grow together. Unfortunately, the production at that time was not ready to create an intermediate cartridge in the correct caliber, because 7,62x39 appeared. But if everything turned out differently, then nobody would even look towards 6,5 Grendel and others like him.

At the moment, it has already been proven not only theoretically, but practically, that the 7,62х39 is not the best ammunition, but, nevertheless, many manufacturers have continued, and will continue to manufacture weapons for this cartridge. The reason for this is that, despite everything, the 7,62x39 cartridge in some situations is superior to both the 5,45x39 and 5,56x45, but these munitions have their advantages, otherwise we would never have 5,45. 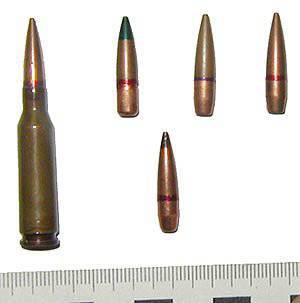 First of all, the appearance of 5,45X39 is due to the fact that the recoil when firing weapons for 7,62x39 cartridges is quite large as a result, the accuracy when firing by the burst decreases sharply. I think that many have seen videos that the AK is not as good as is commonly believed, in which the superiority of the M16 in accuracy of fire in front of the AKM was clearly demonstrated. You can write off everything on the design of the weapon itself, but, as it seems to me, such a comparison is absolutely inappropriate. Since with the same pleasure it is possible to compare AKM and any light machine gun under 7,62х54 when shooting from a shoulder standing and to prove that the accuracy of the machine gun is worse than AKM. Ammunition is completely different, and therefore the comparison of speech can not be. It was the increase in the accuracy of the automatic fire that was the main reason for starting work on the 5,45х39 cartridge. But besides this there were other positive aspects in reducing the caliber, such as reducing the weight of ammunition or the same price during production.

All this turned out to be quite reasonable arguments and when the cartridge was still brought to mind, we got what we wanted, but did not take into account one circumstance. A circumstance has been a decrease in the effectiveness of hitting, as well as a decrease in the effective range in the practical use of weapons. However, at that time it did not attach much importance, the main thing is to make a hole in the enemy, and the rest is unimportant. In addition, I personally repeatedly heard such an opinion that from the economic side it is much better to injure the enemy, since money will be spent on his treatment, while the coffin will be much cheaper. Even if you take this rationale seriously, it is impossible not to take into account that the wounded may remain for a long time not a full-fledged, but quite a combat unit. In other words, 5,45x39, as well as 5,56x45, do not provide that stopping effect like 7,62x39. 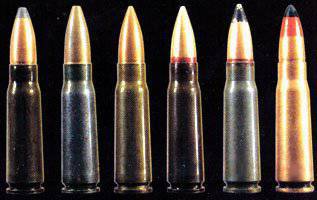 I think everyone will agree that the stopping effect of ammunition is a very important thing, given the current knowledge and practice, the manufacturers agree with this. Thus, the essential problem of the cartridge 7,62х39 lies only in high recoil energy when firing, which reduces the accuracy of the automatic fire. Well, what weight is that weight? A remarkable point in all of this is that they began to struggle with the problem of recoil when shooting, or rather weapon stability when shooting, even during the first competition for an automatic machine for the Soviet Army. But all the proposed ideas had problems with reliability, the designers simply didn’t have a base and the thoughts that came to people were raw, they went to experimental samples, and actually our school of gunsmiths was born, because there was no looking back opportunities. But by the time of the transition to ammunition 5,45x39 there was already a fairly good base of the most interesting developments that increased the stability of the weapon when maintaining automatic fire, because it was they who had to give the green light rather than develop a replacement for the cartridge. In the end, back it was necessary to turn to what Fedorov was offering and at least try. However, we tried, but then 5,45x39 was already maximized and the next transition could not be pulled simply financially. 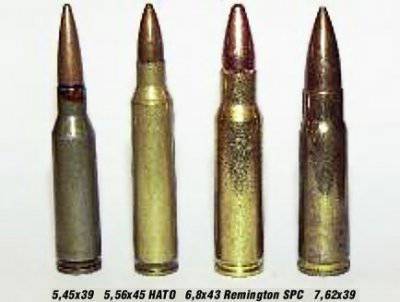 Outside of the motherland, everything was somewhat different. Caliber 7,62 millimeters there also existed, but in the form of a full-fledged rifle cartridge 7,62x51. It was under this munition that they tried to blunt the machine gun once, but crawled to heal bruises on their shoulders and set about developing the cartridge 5,56х45, which is why our 7,62x39 is still pulling hands, it’s not elementary, or rather, the price is not comparable.

In addition, since the end of the last century, intermediate cartridges have been developed in calibres from 6 to 7 millimeters and I must say very successful. So it was possible to achieve the characteristics of the domestic cartridge 7,62х39 with less impact, caliber, weight. Moreover, some options, such as the 6,8 Remington, require replacing a minimum of parts in order to switch from the 5,56 caliber to the new one. And everything seems to be good in new ammunition and the characteristics and the ability to adapt the already used samples, but so far no one is in a hurry to turn to them, although they are clearly more efficient than the 5,56x45 or 5,45x39 cartridges. 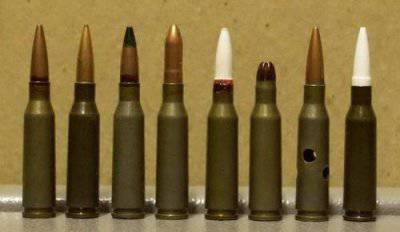 As already noted above, the price of these ammunition is no comparison with the price of the already widely distributed 7,62x39, which is not produced only by the lazy. Of course, new ammunition is significantly superior to its low-impulsive counterparts, and in comparison with the 7,62 x39 can be without any concessions, but the cost due to the lack of large-scale production varies greatly with the domestic patron. Thus, it is much more profitable to make a version of a weapon for a cartridge, which in some places literally rolls under your feet than under expensive ammunition, letting the weapon be stronger and stronger, but even with this in mind, it is cheaper to solve the problem of recoil compensation. What actually proves the company IWI their plans. Still, 7,62х39 still cannot be abandoned, despite its negative qualities and the existence of a large version of equivalent and superior replacements, but it would be better, of course, once Fedorov was listened to, you see, and the NATO army would get more intensely at-tat.