Who “succeeded” in the American case Tsarnaev

April 26 2013
42
On Wednesday, US Secretary of State John Kerry noted that Tamerlan Tsarnaev “learned something” during his recent trip to the North Caucasus. "This young man first went to the Russian region of Chechnya, and then made an explosion in Boston," said Kerry, talking to a correspondent "Voices of America" in Brussels. “He did not stay where he was,” the Secretary of State continued. “However, he learned something there and came back with the desire to kill people.” 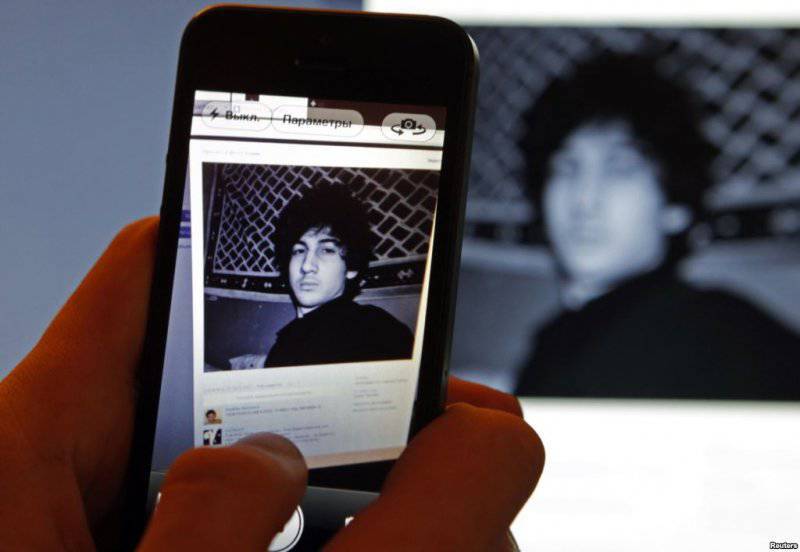 You can, of course, think that Mr. Kerry uses such complex combinations of words as “the Russian region of Chechnya” because of the general dislike of Americans for geography when Chechnya is confused with the Czech Republic, and then hasty advice to the government to bomb Prague. However, it can be assumed that the adjective pronounced aloud the name of an adjective deliberately determines the regional affiliation. Not somewhere, but in Russia, they say, Tsarnaev Sr. visited, and returned from there "with the desire to kill people." Then there is the trend of the last years - the revival of that glorious (for older Americans like Mr. Kerry) of a bygone era, when the “cold war” was on, sometimes it seemed very hot.

John Kerry, this half-stone descendant of the dinosaur era, a worthy successor to Hillary Clinton, might remember that as early as 2011, Russia had been asked by the United States about Tsarnaev Sr. As reported correspondent ITAR-TASS Dmitry Kirsanov, FBI spokesman Michael Cortan assured the American public that his department had a conversation with Tamerlane in 2011, for which reason a press statement was made. This document indicated that “at the beginning of 2011, the foreign government requested” information from the USA “on Tamerlan Tsarnaev”. The FBI said: “This request was based on the information that he (Tamerlan Tsarnaev) was a follower of radical Islam and a deeply religious person, that he had changed dramatically after the 2010 year, when he was preparing to leave the United States in order to go to the region (he asked the US intelligence services assist the country in order to join unnamed underground groups. " In addition, in the same 2011, the FBI "conducted an interview with Tamerlan Tsarnaev and his relatives." Later, US law enforcement officials clarified that the country requesting the request was Russia.

25 April "BBC" reported that Tamerlan Tsarnaev a year and a half ago was included in the database of the anti-terrorism unit (at the request of the CIA). This was done just after the Russian security authorities came to the conclusion that Tsarnaev could have planned an attack on the territory of Russia. Yes, that's just a preliminary investigation by the FBI did not reveal the danger of Tamerlane. No, not for Russia, - for the USA.

The BBC database, known as Tide, now contains information about 745 thousands of people. But the base does not coincide with the so-called list of potential terrorists, which are being monitored. So that this bowl of Tamerlane passed. The fact that Tsarnaev Sr. is growing up brother, the FBI or the CIA did not think at all. Last year, this brother became a US citizen and even received a scholarship to study at the university. Instead of an excellent study, he, however, preferred to blow up the Americans (his relatives are on his passport) and shoot at their police officers.

As for the bombs, they were homemade and radio-controlled. Speaking at a hearing in the US House of Representatives, investigators reported that similar devices were being used to remotely control radio-controlled toys.

“It was a remote mechanism like a toy typewriter. This means that the brothers took information on how to make a bomb from the magazine "Inspire", which was confirmed by the younger brother ", - quotes RBC the words of Democrat Congressman Datca Rappersberger, who heads the intelligence committee of the lower house of Congress.

This magazine was created by Yemeni preacher Anwar al-Awlaki, who was later killed by American UAVs in Yemen.

In general, the FBI was a mess, but now politicians can talk about the “Russian trail,” and special agents can demand a larger piece of the sequestered budget. We must wait and fall Obama's rating.

In addition to the questionable, in our opinion, hints on the “Russian region of Chechnya,” the United States began to declare that it was time to begin to speak openly on Muslim topics. The other day "Inopressa" made a review of foreign newspapers on this entertaining and "politically incorrect" topic, in the plots of which, for the sake of fascination, there were also related issues.

“Following the terrorist attacks in Boston, President Obama and Russian President Vladimir Putin decided to strengthen bilateral cooperation in the fight against terrorism,” writes Janusz Bugayski, a commentator for The Christian Science Monitor, who is a big dreamer.

According to him, Washington and Moscow are fighting terrorism in opposite ways. If in Watertown the police avoided explosions or skirmishes that could harm civilians, the Russian scenario “would be a massive operation to destroy an entire area where the suspects could be hiding. Several hundred civilian casualties would have been written off as inevitable losses. ”

The journalist argues his point of view by the fact that such a strategy, it seems to him, was used during the storming of the school in Beslan, when 380 people died, and when 130 was poisoned by citizens in the Moscow theater on Dubrovka.

“As the Olympiad approaches, the zeal of the Russian special services is likely to increase, and may provoke the reaction that the fight against terrorism should prevent,” the author of the article fears.

Glen Howard, president of the Jamestown Foundation (USA), in an article for The Wall Street Journal, calls Dagestan "the center where global jihadist activities flourish." He notes that the Boston terrorist Tamerlan Tsarnaev and Al Qaeda leader Ayman al-Zawahiri are united by the fact that they both lived for several months in Dagestan.

The analyst points out that Chechen youth are the most attractive recruits for Islamists who need fighters for jihad against the USA and their allies. According to the author, Tamerlane was trained in Dagestan, necessary to commit the terrorist attack in Boston. The author of the article complains that the United States does not pay attention to the "separatist wars of Chechnya with Russia and the suppression of Muslim minorities by Russia". This analyst also mentions the upcoming Olympics in Sochi: sports games near the North Caucasus can be very, very dangerous.

The theme of the wrong Kremlin tactics in relation to Chechnya is being developed on the pages of The Washington Times and former US envoy to the United Nations John R. Bolton. He writes bluntly: "We should not veil the Chechen origin of the alleged Boston terrorists."

Chechnya is the source of “countless terrorist acts against Russia,” the analyst recalls. What is Moscow? She took brutal retaliatory measures, and "in Chechnya, the tactics of Moscow itself led to the death of many innocents."

Chechen separatists have become radical Islamists, and are now acting in the ranks of terrorists in various countries. Mr. Bolton really saddled the topic of "foreigners": "Alas, many commentators and Obama administration officials demonstrate conscious blindness - they refuse even to recognize key issues arising from the possible involvement of foreigners."

An Islamist trail in the attack was discovered by Frank Gaffney Jr., director of the Center for Security Policy. In an article for The Washington Times, he writes that one cannot ignore the Sharia trail. The question is whether political leaders, the media and ordinary citizens have the mind and the courage to draw obvious lessons from this tragedy.

The article says: "The suspects Tamerlan and Dzhokhar Tsarnaev were jihadists who were born in the troubled Russian republic of Chechnya - the forge of Islamic terrorists - and were named after outstanding figures from the recent and distant past of this movement."

Their radicalization occurred after they came to Islam. Gaffney is outraged that Barack Obama stubbornly refuses to recognize the link between terrorism and Islam. After all, his administration has already gone so far as to use instead of the word “terrorism” the expressions “cruel extremism”, “anthropogenic catastrophe” and “violence in the workplace”. The FBI cleared from training materials everything that could offend Muslims ’feelings,“ including, apparently, all the information about the connection between sharia, jihad and терро terrorism ’. In general, the author is greatly indignant.

He reminds Barack Obama that the flirting of the White House’s administration with the Muslim Brotherhood “leads to their legitimization, strengthening, increase in their financing, supply weapons and establishing their dominance with our help everywhere in the Sunni Islamic world. "

As a measure of the fight against the Islamists, Gaffney proposes the protection of US citizens "from anti-constitutional doctrines such as Sharia". Among the measures “reduction of migration quotas for imams, advocating for Sharia, and for residents of Muslim countries; observation of the mosques that preach this doctrine and the jihad adjacent to it, as well as the removal of those associated with the Muslim Brotherhood from the posts of officials and advisers in the US government. ”

Let's sum up. American observers and analysts seem, to put it mildly, wrong in the fight against terrorism to cooperate with the Russian special services. If the FBI begins to adopt the methods of the Russians, then very little will be left of the United States in the near future. Also, American experts believe that it is time to dot the i and call things by their proper names. Jihadists are so jihadists, Muslims are Muslims, Chechens are Chechens, angry with Moscow’s policy against Chechnya and somehow avenging America for this, so angry and avenging. Finally, the newspaper people hinted to Obama - not for the first time - and wasn’t he a Muslim brother? So far, journalists are still discussing what the Tsarnaevs and Zawahiri have in common, but they will soon begin to seek out the Dagestan roots of Barak Hussein.

By the way, in the media they write that during hospital interrogations, Dzhokhar Tsarnaev admitted that the motive for organizing the Boston bombings was the wars that the United States had waged in Iraq and Afghanistan.

The FBI’s failures, Obama’s weak policy, the Russian trail, the sharatchikah in the United States are much talked about today - but few people ask themselves if their native United States has annoyed other countries and peoples so much that the whole world is against the Americans? Is it time for the White House to follow the advice of the former blue-eyed presidential candidate Merlin miller? Oh, in vain, Obama did not take him to the state secretaries. However, the Congress would give a ride to Comrade Miller, calling him a racist, a supporter of the Iron Curtain and an opponent of freedom, democracy and, most importantly, human rights.

Observed and commented on Oleg Chuvakin
- especially for topwar.ru
Ctrl Enter
Noticed a mistake Highlight text and press. Ctrl + Enter
We are
Results of the week. “We were sincere in our delusions!”Geopolitical mosaic: Tamerlane washed his brains to Joharu, and the Americans decided it was time to bomb the Czech Republic
42 comments
Information
Dear reader, to leave comments on the publication, you must to register.