People in uniform against the shooter "to hell"

April 25 2013
183
Belgorod. A calm and prosperous Russian city, references to which, if it has appeared in recent years in the domestic press, is only in a positive way. However, the tranquility of this regional center was broken by the everyday day of 22 on April 2013, when 31-year-old local resident Sergey Pomazun staged a bloodbath in the very center of the city. WITH weapons, which he possessed by breaking open the gun safe in his father’s (hunter’s) apartment, Pomazun Jr. went to the Ochota store, with whose staff, according to some sources, he had a big fight the day before. 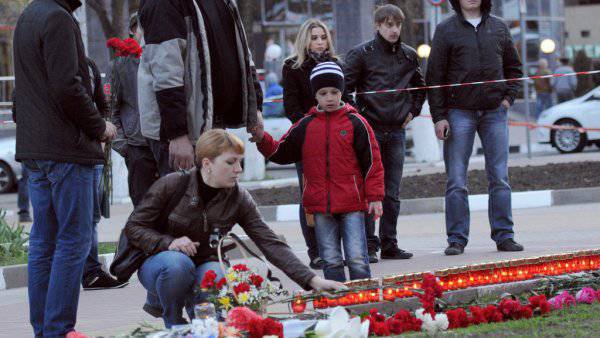 A quarrel, if this incident that occurred in the store a few hours before the tragedy, can be called so, for the reason that Sergei Pomazun was refused to sell ammunition, as he did not have a weapon permit and at the same time there were several criminal convictions canceled. Pomazun with the words "I'll shoot you all" retired. Before that, Pomazun was not allowed into the neighboring department store by the guards, who did not inspire confidence in his appearance. Then no one paid serious attention to the words of the criminal.

After some time, Pomazun took possession of his father’s weapons, returned to the Ochota store on a BMW X5 car, and embodied his threats into a nightmarish reality, killing three gunmen from the Saiga carbine on the spot. A number of Russian publications claim that this store belongs to the murderer’s father - Alexander Pomazun, 56-year-old. After the triple murder, Sergey Pomazun decided to grab with him a weapon from the store drenched in the blood of his victims. Out on the street, the murderer met on his way two schoolgirls, who were also not spared. One girl died on the spot, the other - died in intensive care from a direct hit by a bullet in her heart. Another passerby became the victim of Pomazun.

After the mass execution, the criminal escaped from the scene by car, which he then threw in one of the yards near the site of the tragedy. Huge forces of law enforcement officers were sent to search for Sergei Pomazun, who even his own parents called an insane person. The operation to capture the “Belgorod shooter” was headed personally by the head of the Ministry of Internal Affairs of the Russian Federation Vladimir Kolokoltsev. Police units from various Russian regions and even from neighboring Ukraine were brought to Belgorod. Ukrainian policemen expressed a desire to help their Russian colleagues after the information passed that Sergei Pomazun may try to go to the Kharkiv region.

The operation to detain Pomazun lasted for more than a day, and what information was not given out during this time by the media: from the fact that Pomazun was blocked and even detained in one of the Belgorod high-rise buildings, to the point that Pomazun had already crossed the Russian-Ukrainian border using foreign documents.

However, Pomazun was detained not in a high-rise building or on the territory of Ukraine, but on the Belgorod railway tracks. So it turned out that the arrest was carried out by officers of the Kursk linear department of the Ministry of Internal Affairs in transport. Kursk police arrived in Belgorod to assist their neighbors in catching the killer.

Four policemen: Lieutenant Alexander Samsonenko, Senior Lieutenant Dmitry Konovalov, Major Yuri Sedykh and Lieutenant Colonel Alexei Yedreshov literally collided with Pomazun on the Belgorod station railways when the killer tried to jump into the freight train. Having identified the “Belgorod shooter” in the person he met, he was stopped by the law enforcement officers, asked to call themselves and present the documents. He responded by calling himself a false name, and instead of documents from his pocket, he took out a knife and pounced on Major Sedykh who was closest to him. The major, having received several knife wounds to the face and neck, still managed to bring Pomazun to the ground, while the other policemen disarmed the killer and handcuffed him.

While Pomazun was on the ground, the police, calling the ambulance for Major Yuri Sedykh and informing other outfits about the arrest of the killer, asked Sergey Pomazun where he had been hiding all the time while they were looking for him. Pomazun replied that he was sitting in a swamp, in which he had drowned his firearms. When he was asked why he shot the children, Pomazun calmly replied that he did not shoot the children at all, but shot the hell ... 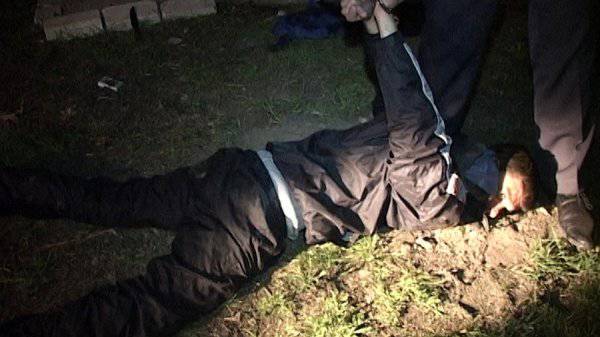 Sergey Pomazun is charged under four articles of the Criminal Code: the murder of two or more persons, the theft of ammunition and weapons, the theft of ammunition and weapons with violence, the use of violence against a representative of the authorities. Before the terrible crime that Pomazun committed on 22 on April 2013 of the year and before attacking a police officer, he was already brought to justice. The first article - for car theft (suspended sentence), the second - again car theft (4 year imprisonment), the third article - again car theft and again 4 year.

We will not go into the details of what prompted Pozamun to a series of murders, because such cruelty in any case cannot have an excuse by definition, and we hope that the murderer will face severe punishment. And pay attention to the work of law enforcement officers, especially since lately the very authority of the system of the Ministry of Internal Affairs in Russia has been significantly undermined, and most often by the employees of the system itself. The situation with the apprehension of Pomazun says that decent and professional employees who are ready to fulfill their duties at the cost of their health and even their lives are not translated into the domestic system of law enforcement.

Someone can say, and that, in fact, such supernatural showed Kursk police, who detained the murderer. Yes, in principle, nothing ... But the fact of the matter is that nothing happened from the negative that the Russian public used to face, evaluating the words and deeds of people in the militia ... sorry, the police uniform. These people just went out and did their job - honestly, without trying to cover up themselves with others. After all, you must agree that participation in the operation of police officers (and one of them is a major, and the other is a lieutenant colonel) is clearly not typical of the current conditions, when staff members of much more modest officials often come to the forefront of the fight against crime, and senior officers usually Coordinates "carrying out operations from its warm cabinets.
In Belgorod, there was a precedent that showed to all Russian law enforcement officers that in the critical moments of the work there should be no division into "you are younger in rank - you go, I’m older - I will lead you." The Kursk police clearly did not recall their shoulder straps, their track records when they were doing their duty. And Major Sedykh, who received serious knife wounds, did not recall. He fought with the criminal, even bleeding to death. 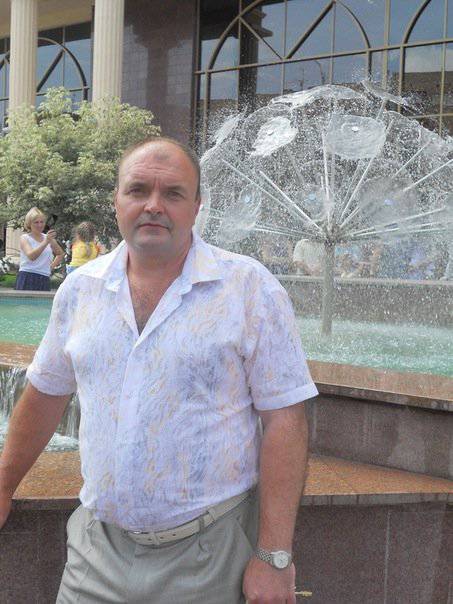 After publications about werewolves in uniform, police officers covering business on illegal migrants, other corrupt police officers, история Belgorod policemen are, no matter how lofty it may sound, a breath of fresh air. Unfortunately, this air is riddled with irretrievable human grief, but it demonstrates that in Russia there remains a chance for the rebirth of the honest name of the domestic guard of law and order. He also demonstrates that there are people in police uniforms for whom the honor of these uniforms is above their personal interests. 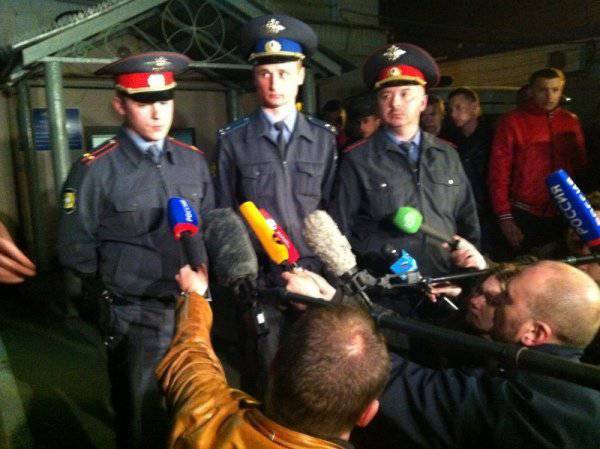 It is noteworthy that the head of the Interior Ministry, Vladimir Kolokoltsev, decided to present the Kursk law enforcement officers, who detained the 6 murderer, for awards. However, the best assessment of the work of these people is a truly popular recognition of their merits, which is much more valuable than the highest awards.

PS “Military Review” wishes a speedy recovery to Major Yury Sedykh of the Ministry of Internal Affairs of the Russian Federation and expresses sincere condolences to the relatives of Belgorod who died at the hands of the murderer Pomazun 22 on April 2013. 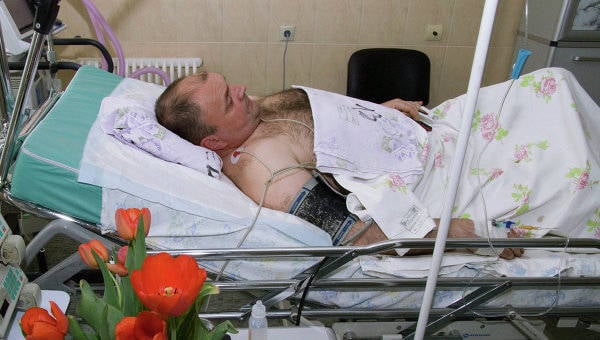