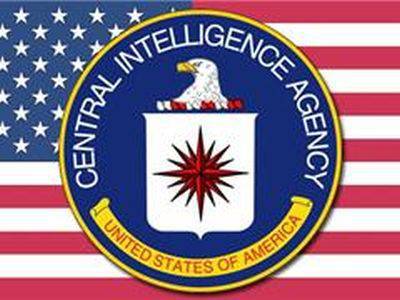 The other day, the world and Russian information space “blew up” another loud confidential information flow in the media. This time, an "anonymous" well-wisher, and according to other sources, a "secret network" from 86, foreign "investigative journalists" around the world dug up and handed over to the American public organization ICIJ information about the beneficiaries of foreign offshore zones, including or owned accounts, companies or transferred their savings to the management of foreign offshore trust funds.


Of course, everything would be logical and may even be useful for Russia in the light of the active fight against corruption. But it is not clear why this information is merged into a little-known American NPO with a wide public, whose office is located in Washington next to the White House, why the ICIJ transmitted this information only to three Russian mass media and strictly forbade sharing it with law enforcement agencies, and of course Why did this happen right now, although as the “investigators” themselves say, the collection of information on offshore companies went for several years? So, as you can see, in this situation there are much more questions than answers, of course, if you do not just read the newspapers and watch TV, but try to look deep into the situation ...

Therefore, for those who not only consume information, but still retain the ability to analyze events, we will try to uncover the mechanism and true goals of the next "sensation" from the American NGO and "Russian independent" media, which is essentially a new stage of the information war against our country.

So, in order. What kind of “beast” is this ICIJ and why is it he (not the mass media) who was leaked to such “exclusive” information? ICIJ is the American "non-governmental" organization "The International Consortium of Investigative Journalists), if briefly, it is a structure uniting a huge network of journalists allegedly specializing in" corruption and crime investigations "around the world. In general, everything is very large and global, as usual with the Americans.

But that is why ordinary Russians and even many of our well-known journalists have never encountered the results of the ICIJ? And the organization’s website contains voluminous and vague reports on the alleged “international investigations” conducted by them on high-profile topics: smuggling, illegal trade weapons, mafia, corruption, etc., according to which it is impossible to realistically assess what they have “pursued” in Russia since its inception. Those interested can delve into these reports on the organization’s website: http://www.icij.org.

It is commendable that American public activists are so worried about corruption all over the world that even with their own funds they have united and supported several hundred journalists in different parts of the world, and of course they rent an expensive office in downtown Washington, contain offices, communication channels and representatives Around the world, a network of informants, in the same place in Washington conduct regular rewards for the most distinguished "investigators" in one of the grandiose halls of the city and much more. The question is - who pays for all this?

As stated on the ICIJ website, the organization is a project of another even larger US NGO - CPI Center for Public Integrity. Their website is here: http://www.publicintegrity.org

Go ahead, and who then finances the CPI? As the organization itself claims, they are sponsored by "private" funds and individuals, mainly from the USA (what conscious citizens there!). We turn to the proposed list of sponsors (donors) and find there several well-known structures: 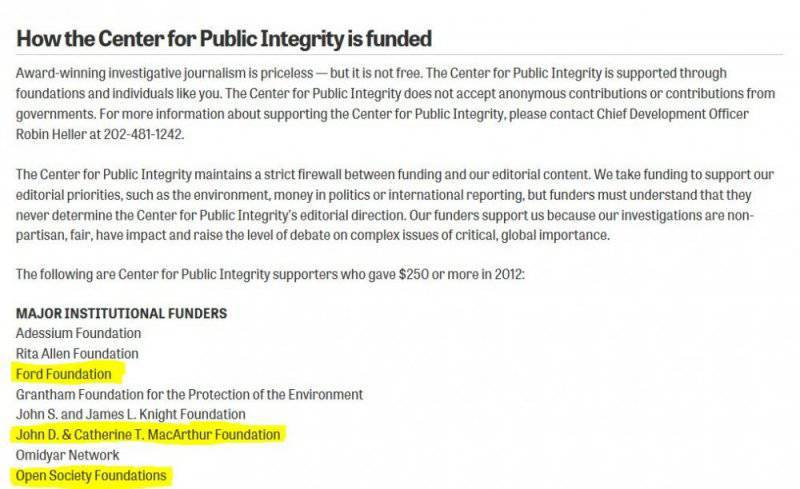 The specialists of this list would be enough to understand who finances the ICIJ and why, and why the work of this NPO is aimed at harming Russia under the guise of "human rights and journalistic" activities. But suppose that for some of our readers the names of the listed funds are “discovery” and therefore we will briefly reveal what these “charity” funds are.

The Ford Foundation - finances opposition and human rights structures in Russia, which mainly then “cry out” in Washington and Brussels about the “intolerance and non-democraticness” of life in our country. At the same time, in the United States itself, the foundation was repeatedly publicly accused of having links with the CIA. So, former professor of sociology at Binghamton University (New York), James Petras and others, accused the foundation of being a kind of “roof” for the CIA: "The foundation is funded by the Congress for Cultural Freedom Foundation , the cover structure of the CIA, and former foundation president Richard Bissell maintained friendly relations with CIA director Allen Dulles and ensured the fund’s participation in the implementation of the Marshall Plan in 1950. The fund finances human rights organizations that specialize in criticizing s human rights taking place in the states - anti-American. " Notice, we didn’t say it and it wasn’t today ... And if we add here that the Ford Foundation is the main sponsor of the US program to popularize the world of abortion ...

MacArthur Foundation - A complete analogue of the Ford Foundation, so we will not dwell on it. Those interested can see the list of its grantees in Russia: http://www.macfound.org/russkij/nashi-grantopoluchateli/prava-cheloveka-grantopoluchatel/.

Foundation Open Society (Soros Foundation) - here everything is clear and no further explanation is required. If you do not know who George Soros is, look at other sources or here: http://www.youtube.com/watch?v=66mZ_7nFLMA

Goldman Foundation - the foundation of the oldest banking family in the USA, the most famous asset of which is the American Goldman Sachs Bank, whose advisers, at the beginning of 1990's, "helped" the Yeltsin-Gaidar-Chubais team to "privatize" and "fairly" divide the legacy in Russia THE USSR.

The Google Foundation and the Jewish Community Support Foundation - the names speak for themselves! The only thing that can be added is that the Google Foundation, like the IT giant "Google" itself, was created with the direct involvement of the CIA, as many articles in various sources have already written about.

Ctrl Enter
Noticed oshЫbku Highlight text and press. Ctrl + Enter
We are
So leaked or not leaked?Offshore - the end of an era
Military Reviewin Yandex News
Military Reviewin Google News
59 comments
Information
Dear reader, to leave comments on the publication, you must to register.