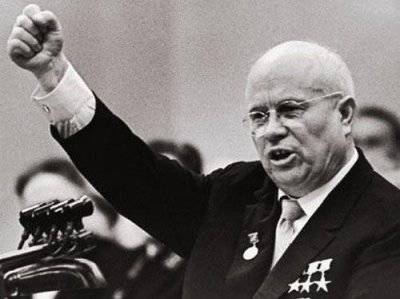 It is known that Khrushchev came out of Stalin’s closest, closest circle. According to the memoirs of contemporaries, in their famous nightly gatherings at Kuntsevskaya dacha, Stalin kept Khrushchev in a role in a kind of clown, a jester. But it was an evil jester and he took revenge on his sovereign in full.


However, I want to talk not so much about the personality of Nikita Khrushchev, but about the theoretical and ideological mistakes he made. And how much was in them from malicious intent and how much - from a lack of intelligence, let the reader decide.

I'll start from afar. The first children’s box was presented to me by my parents on May Day, it was bright red in color and it was written in golden letters “Peace to the world” on it. The inscription was incomprehensible to me, but fascinated by its mysteriousness. Then I met this slogan hundreds of times, sometimes in the most unexpected places, where people seemed not to go. But this slogan accompanied the Soviet man from the days of his October childhood to a prosperous old age. And since the age of pioneer, we already firmly knew that the USSR is fighting for peace and that the united Soviet people do not want anything like world peace. The idea of ​​the world was so natural and obvious that no one seemed to try to comprehend it in a theoretical aspect.

But he called himself a grudge - get into the back: a country that has declared the goal of its foreign policy to fight for peace voluntarily imposes certain restrictions on itself. For example, it cannot develop offensive weapons, it cannot create strike troop formations, cannot build aircraft carriers, cannot invade the territory of other states, in order to solve its geopolitical tasks. Yes, many things were done by the Soviet Union in their political and geopolitical interests and in spite of their own ideological attitudes, but they were done in secret.

Thus, instead of aircraft carriers, the construction of submarines successfully developed in the USSR. The submarine is definitely powerful weapon, but as a means of intimidation, psychological pressure on the enemy - does not go in any way with the surface fleet. And the Soviet Union was most often forced to render assistance to friendly regimes secretly - let us recall the participation of the USSR in the Korean and then the Vietnam War.

I want to mention the key moments that most affected the authority of the USSR and foreign countries' confidence in it: the suppression of the Hungarian uprising by forces of army units in 1956, the Caribbean crisis in 1962, the introduction of troops into Czechoslovakia in 1968. It is clear that in all these cases, the USSR solved its strategic tasks, but our state did not have a corresponding ideological justification, understandable to the Soviet people and inhabitants in the whole world. The struggle for peace has not simply tied our hands, it has deprived us of the moral strength that lies in the truth, in our righteousness.

It ended with the ideological catastrophe of 1979 of the year - the introduction of a "limited contingent of Soviet troops" in Afghanistan. Whatever the regular propagandists say about this, it sounded unconvincing precisely because there was no serious theoretical, ideological justification. It turned out that the USSR, speaking categorically against the “export of the revolution”, in fact carried out this export itself.

On the way to Afghanistan, the USSR was allowed another major ideological and political miscalculation - I mean the Conference on Security and Cooperation in Europe and the Helsinki Accords 1975 of the Year. In fact, it was the failure of the entire foreign policy of the USSR, which in the Soviet Union itself was falsely interpreted as a victory (see, for example, Chakovsky’s novel “Victory”). The West has finally untied its hands in relation to the USSR and officially received the right to "look after" its ideological opponent and interfere in its internal affairs. Without actually winning anything, the USSR received a foreign agent in its own home - the Moscow Helsinki Group, whose legacy in the person of Hon. Mrs. Alekseeva we can often see on TV.

The most annoying thing is that Russia still, in continuation of the Khrushchev's heritage, “fights for peace”, allowing European Lilliputians to entangle themselves from all sides with numerous bans. Is it not time for Gulliver to break the bonds and rise to his full gigantic height?

The second mistake of Nikita Khrushchev and his official theorists is the notorious competition of two systems. I do not know in whose head this slogan originated (“Catch up with and overtake!”) And by what motives it was dictated. On the one hand, this slogan equalized the goals of the two systems - it turned out that the USSR and the USA had the same goals, only the ways were different. On the other hand, this slogan put the USSR in the position of the catching-up side, giving rise to the corresponding psychological complex, which Russia still cannot get rid of ...

From that moment on, the indicators of the two countries (USSR and USA) were constantly compared in terms of personal consumption. However, comparing the two systems for this indicator meant only one thing - to recognize socialism as an unsuccessful copy of capitalism. As a result, the Soviet man ceased to be proud of his system and began increasingly to enviously glance in the direction of the United States. The famous lines of Mayakovsky "The Soviet have their own pride, we look down on the bourgeois!" Have lost their once-great significance.

And the third serious mistake of Khrushchev was that he decided to make the Soviet Union a more open society. The start was given by holding the World Festival of Youth and Students in Moscow in 1957. Then foreign tourism began to develop in the country. At its core, the idea was not bad: to show firsthand the advantages of the socialist system. However, the question arises: who to show? A tourist is a special being, his view of the world is limited to the program of his stay and excursions, as well as living and service conditions. The tourist business is a service industry, and it is clear that the capitalist service “slaughters” the socialist service in the very first five minutes of the fight (for it is based on other principles). It was difficult for a tourist who came to the USSR to see our true wealth - Soviet internationalism and the brotherhood of nations, for example. But the shortcomings of service, as well as commodity poverty, the paucity of entertainment, immediately caught the eye. In turn, the Soviet tourist, having got to the West, did not see the class contradictions of capitalism point-blank, but the commodity abundance, level of service and the entertainment sphere plunged him into a cognitive and psychological shock.

In my opinion, it was these listed three elements of the policy of the Khrushchev era that first gave rise to dissidence, and then led to the rebirth of the socialist system in a bourgeois way. It was not for nothing that voluntarism was imputed to Khrushchev when he was removed from the main post in the party. So he really was. But we should not forget that Khrushchev was not an alien creature, he emerged from Stalin’s inner circle. Theoretically extremely poorly prepared, who did not overcome the petty-bourgeois psychology, he turned out to be the biggest (and fatal) mistake of Joseph Vissarionovich, who ultimately destroyed the fruits of Stalin's works.

However, L. Brezhnev, who replaced Khrushchev on the post of General Secretary, differed from his predecessor by the fact that he not only did not understand the nature of society in the country entrusted to his power, but did not even try to understand. In general terms, he mechanically continued the policy of his predecessor and, without major upheavals, led the country to a precipice ...

Ctrl Enter
Noticed a mistake Highlight text and press. Ctrl + Enter
We are
About Stalin and KhrushchevFunctional stupidity and national stupidity
164 comments
Information
Dear reader, to leave comments on the publication, you must to register.