April 19 2013
11
Sudden checks of the combat readiness of the troops become regular. 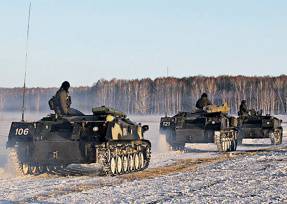 The practice of sudden inspections of the combat readiness of troops is becoming more and more widespread in the Armed Forces of the Russian Federation. And now, without warning, military units not only the Supreme Commander-in-Chief or the Minister of Defense are alerted, such checks are beginning to be organized at a lower level of control — in the Armed Forces and the types of troops.

Yesterday, at the direction of the commander of the Airborne Forces (Airborne Forces) Colonel-General Vladimir Shamanov, a sudden check of the combat readiness and combat capability of one of the assault landing regiments stationed in the city of Pskov of the 76 Guards airborne assault division started. Rather, the very rise of the personnel of the divisions and control bodies of the unit in alarm occurred even the day before, on April 16. The reinforced battalion group of the regiment on a standard vehicle made a march to the “Strugi Krasny” training ground located in 70 kilometers from the regional center. And she started there to perform control exercises on firing from the armament of the airborne combat vehicles (BMD). About 500 military personnel, 29 armored vehicles, over 30 units of special automotive vehicles take part in practical actions.

As the spokesman for the Office of the Press Service and Information of the Russian Defense Ministry for the Airborne Forces Colonel Alexander Kucherenko, told the NG editorial office that today the commander of the Airborne Forces Colonel-General Vladimir Shamanov "will personally participate in conducting control test driving units machines and shooting from regular small arms ". This test with the practical implementation by the units of actions to bring the military units to the highest levels of combat readiness is carried out directly by the decision of the commander of the Airborne Forces. He intends to assess with utmost criticality the real readiness of the troops to perform tasks for their intended purpose. The results of a sudden inspection will be the basis of the overall assessment of the 76 Guards Air Assault Division following the results of the winter training period of the 2013 year.

In accordance with the decisions of higher bodies of the military command and control, the military units of the Airborne Forces from the beginning of 2013 participated in two sudden checks of the combat readiness of troops (forces) - in the Central and Southern military districts. In February, units of the Ivanovo Airborne Force (Western Military District) were suddenly raised by alarm, deployed by a military transport aviation to the Urals near Chelyabinsk, where they completed tasks together with the military units of the Central Military District. That check was initiated by Supreme Commander-in-Chief Vladimir Putin.

However, the second one in the south of Russia is also on the written order of the president. In the last large-scale verification of the combat readiness of the troops (forces) of the Southern Military District, paratroopers of the Novorossiysk air assault (mountain) formation, parachute regiment of the Tula division from Ryazan, reconnaissance of the 45-th separate special forces regiment stationed near Moscow Kubinka took part in March. By the way, the really high intensity of combat training in the Black Sea coast then caused, in March, a somewhat nervous reaction from the NATO command. I was offended that they, they said, had not been warned in advance about such powerful maneuvers in relative proximity to the borders of Southern European countries, to European transport routes and communications. They from our side calmly replied that 7 thousand of military personnel participating in the exercise is much less than the quantitative threshold after which it is necessary to notify all neighbors. In general, these exercises were aimed at solving exclusively internal tasks: not to demonstrate the strength of someone, but to find out what kind of defense potential actually exists in one or another strategic direction.

Actually for the sake of this, the practice of sudden inspections of troops is reviving. In an interview with our newspaper, the Chief of the General Staff of the RF Armed Forces, Army General Valery Gerasimov, confirmed that such checks would be carried out regularly and at different levels of command and control. Indeed, for more than 20 years, nothing like this has happened in the Russian Armed Forces. During this time, the composition of military personnel in the army and navy. Their ability to fulfill the tasks of defending the country, repelling aggression needs serious checks.

Ctrl Enter
Noticed oshЫbku Highlight text and press. Ctrl + Enter
We are
Completed a surprise check of the troops of the Central Military DistrictCommander of the Airborne Forces checks the combat readiness of one of the regiments of the 76 airborne assault division
11 comments
Information
Dear reader, to leave comments on the publication, you must to register.