The Americans studied the DPRK rocket lifted from the ocean floor 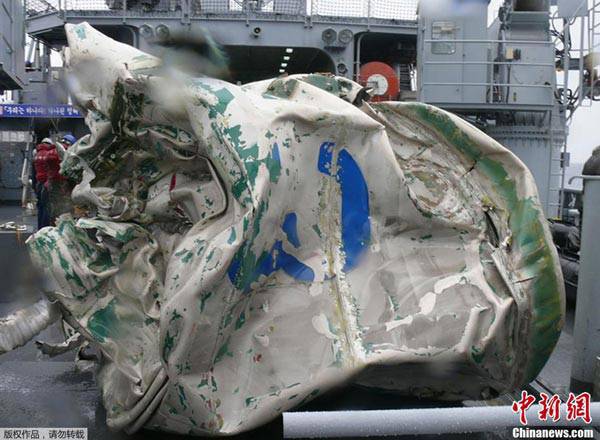 US specialists were able to restore the head of the launch vehicle lifted from the ocean floor, which was used to launch the North Korean Eunha-3 satellite in December, Western media reported.


Apparently, the article in The Daily Beast is about the third stage of the rocket, which fell into the Philippine Sea 200 kilometers from the Philippine Islands. At what depth was a raised fragment of the rocket, not reported. The average depth of this sea is slightly more than 4 thousand meters.

During the reconstruction, which was attended by experts who worked in projects on North Korean armsIt turned out that the DPRK was creating missile front parts suitable for placing nuclear warheads in them.

According to experts, there is tangible evidence that North Korea is working to create a long-range missile capable of carrying a nuclear warhead.

However, according to the director of national intelligence, James Clapper, "it is inappropriate to assume that the North Korean regime was able to minimize the nuclear warhead, while maintaining its combat effectiveness."

According to him, the DPRK is still “not able to demonstrate the full range of capabilities necessary to build such a rocket.”

Sources of publications suggest that North Korea has worked on reducing the weight of the charge for many years.

According to A. K. Khan, who is considered the father of Pakistan’s nuclear program, in 1999, during a visit to Pyongyang, he was shown components for three nuclear warheads that can be assembled in one hour.

Recall that on December 12, the DPRK authorities launched a long-range ballistic missile Ynha-3 from the Sohe space center in the western province of Phenan Pakto.

According to the US intelligence satellite, which recorded the launch, the rocket headed south.

The launch of the DPRK rocket, according to various sources, took place around 09.50 local time (04.50 Moscow time). Later it became known that the satellite was put into orbit.

The launch of the rocket came as a complete surprise, since the day before the DPRK authorities had begun dismantling the rocket with a scientific satellite.

On Friday, a representative of the South Korean defense department, Kim Min Sok, said that the DPRK does not have a nuclear charge that can be used as a ballistic missile warhead.

Assumptions that North Korea could carry out a test launch of a mid-range Musudan-type ballistic missile appeared in early April.

It is believed that the range of such a rocket is about three to four thousand kilometers. In addition, it was suggested that Pyongyang could launch several Scud and Nodon missiles at once from various sites in the country in the event of an unsuccessful launch of a Musudan-type ballistic missile.

On Thursday, the Japanese agency Kyodo reported that at least one launcher of Musudan missiles was in the launch position. Congressman Doug Lamborn said, voicing the opinion of the Pentagon’s intelligence department, that the agency believes with a moderate degree of confidence that Pyongyang is capable of securing a nuclear warhead on a ballistic missile.

Ctrl Enter
Noticed a mistake Highlight text and press. Ctrl + Enter
We are
The Daily Beast: The United States is increasingly fearful of the newly awakened Russian fleetIn response to the "provocations" North Korea promises a "sea of ​​fire"
12 comments
Information
Dear reader, to leave comments on the publication, you must to register.