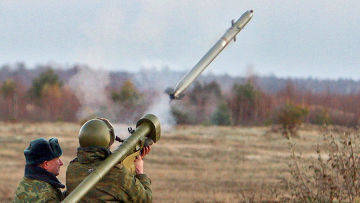 Russia confirmed to the US representatives the sale of at least 100 man-portable air defense systems (MANPADS) to Venezuela, which Washington regards as weapons that upset the balance of forces in the region. The agreement on the sale of Spanish aircraft and ships to Caracas also caused a negative reaction from the US authorities. Reports of US diplomatic staff provided to the El Pais newspaper by the Wikileaks portal also indicate that the Colombian president Alvaro Uribe (Álvaro Uribe) was trying to secretly enter into a direct dialogue with the rebel group of the Revolutionary Armed Forces of Colombia (FARC).


Senior government officials in the middle of last year confirmed to members of the US delegation that at that time Venezuela had sold 100 man-portable air defense systems (MANPADS) to Venezuela, which Washington considers to be extremely upsetting the balance of forces in the region, reports the US Department of State. And although Hugo Chavez personally reported on the acquisition of these weapons, their number was never reported, and no one assumed that it was a question of such a large party.

The rearmament of the Venezuelan army and the expanding military-technical cooperation of this South American country with Russia have long been a concern of official Washington, which is putting pressure on a number of states within its orbit, and on Russia itself, to prevent the sale of weapons to the Chávez regime. The official reason is that they may fall into the hands of FARC rebels, but documents published on Wikileaks indicate a growing Russian military presence in Venezuela, acquiring at least 100 Igla-S MANPADS (SA -24), as well as the role of Deputy Prime Minister Igor Sechin, trustee of the head of the Cabinet of Ministers of the Russian Federation Vladimir Putin, in relations with Caracas.

One of the worst-case scenarios that are considered in Washington is the probability that MANPADS (their combat use is ensured by one person) will fall into the hands of the Colombian partisans. Thus, in order to bring down the aircraft, one fighter is enough. US military experts consider this type of Russian-made weapons "one of the most dangerous portable air defense systems that have ever been manufactured." Using these MANPADS, which range from four to six kilometers, it will be quite easy to shoot down Blackhawk helicopters used in Colombia.

The US is monitoring the situation with MANPADS at the highest level. Last July, while Presidents Dmitry Medvedev and Barack Obama met in Moscow, military experts from both countries held a parallel meeting, the central theme of which was Venezuela. The Russian side confirmed the fact that Xnumx missiles and launchers had been sold to Karakas in that quarter. This does not mean that Russia subsequently did not supply Chavez an additional batch of anti-aircraft missiles. At the same meeting, held in an atmosphere of cooperation and a wide exchange of information, Russian representatives assured their American counterparts that weapon will not fall into the hands of a third party.

During the raid against the rebel camps, computers owned by one of the FARC leaders Raúl Reyes were put at the disposal of the Colombian military. They were found correspondence between the Venezuelan military and a certain Luciano Marín Arango, aka Ivan Marquez (Iván Márquez), a member of the FARC Secretariat, where the first offered weapons to the Colombian partisans.

Since the Americans could no longer prevent the deal, they turned to the Russian side with a request that the anti-aircraft missiles sold to Venezuela belong to a class that involves launching from stationary platforms, in extreme cases, from trucks. However, Russian representatives invariably responded that Chavez himself insisted on the delivery of man-portable air defense systems.

In connection with such shipments, not only FARC is becoming a headache for the United States. Sources to whom our newspaper turned for advice on this issue believe that Venezuela’s Igla air defense systems, the Tor M-1 air defense system, as well as C-300 air defense systems, which Chavez announced in October this year ( It is these complexes that Moscow refused to deliver to Iran), the US Air Force will be forced to think carefully before trying to violate the airspace of the Bolivarian Republic.

In this new alliance between Moscow and Caracas, the fundamental role is played by Russian Deputy Prime Minister Igor Sechin, who enjoys the most confidence of Vladimir Putin and deals with ensuring the energy interests of Russia on a global scale. In September 2008, the chairman of the Russian government himself, appointed him co-chairman of the Russian-Venezuelan Intergovernmental Cooperation Commission. Sechin is personally sympathetic to Latin America, speaks Portuguese fluently and can speak Spanish. The Americans believe that Putin’s decision to appoint him co-chairman of a bilateral commission instead of Alexander Zhukov (also the deputy prime minister) is due to the intentions of the head of the Russian government to deepen relations with Chavez in all areas, including the military.

Ctrl Enter
Noticed oshЫbku Highlight text and press. Ctrl + Enter
We are
There was no bloodshed ...
Add a comment
Information
Dear reader, to leave comments on the publication, you must to register.