Near the village of Sokolovo ... 70 years ago the Czechoslovak battalion defended the Ukrainian village 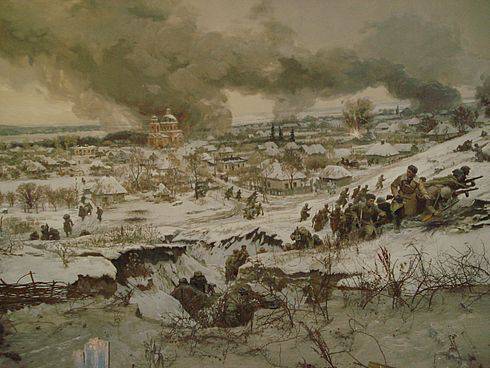 Sokolovo. A village as a village, dozens of villages carry such a name in Russia, Belarus, Poland, and there are three more Sokolovs in the same Ukraine. But this, that on the river Mzha, in the Kharkiv region, in which nearly a thousand and a half people live, is special. Here, in battles for the defense of the village of Sokolovo against the fascist German forces 70 years ago, he received, together with the Red Army units, the baptism of the 1 Czechoslovak Separate Infantry Battalion under the leadership of Colonel Ludwig Svoboda, who later became the first post-war President of Czechoslovakia.


On March 8 and 9, 1943, during the Kharkov defensive operation, the battalion heroically repelled numerous attacks tanks and enemy infantry, destroying about 300 enemy soldiers and officers, 19 tanks and 6 armored personnel carriers. At the same time, having lost 112 fighters and commanders under Sokolovo dead and 106 wounded.

Since Soviet times, there is a large museum in Sokolovo dedicated to the heroic defense of the village, which became a symbol of the military community of the Slavic peoples in the fight against the brown plague of the twentieth century - German Nazism. Directly opposite the museum is a memorial with the mass graves of Soviet and Czechoslovak soldiers. And at the entrance to the 9 Museum in May 1972, the 16-meter monument arms”, The authors of which were students of HISI A. Vengerov and N. Dzuba. Supervised the student group of authors E. Dundich.

For courage and heroism 84 battalion fighter were awarded Soviet orders and medals. And Nadporuchik Otakar Yarosh, the company commander, a Czech, the first of foreign nationals, was posthumously awarded the title Hero of the Soviet Union.

Another 87 fighters received Czechoslovak orders and medals. And today the street named after O. Yarosh is one of the most famous in Kharkiv, it is located in one of the city’s favorite districts of the city - Pavlovoye Field. The name of the hero is honored by today's Kharkiv citizens. There is also a large avenue named after Ludwig Svoboda in the city, in the Alekseyevka area.

This year was a jubilee year due to many memorable events of the Great Patriotic War. We celebrated the 70 anniversary of the victory in the Battle of Stalingrad, now it is chronologically time to celebrate the series of memorable dates of 1943, associated with the battle for Ukraine and its liberation.

And if today in Ukraine, some are not averse to turning everything inside out, to glorify Bandera, collaborators, SS men and Shutzmans, then, surprisingly, in Eastern Europe many people keep the memory of the joint Slavic military feat of the distant years. That is, after the cessation of the Warsaw Pact, the fall of the Berlin Wall and, say, a peaceful divorce of a single Czechoslovakia into two countries, a unifying tendency is revealed, the source of which becomes common memory. It gives hope.

So, 8 and 9 March with. in the Kharkiv region, the Czech and Slovak delegations participated in the events celebrating the 70 anniversary of the fighting under Sokolovo, in total about 200 people.

On the first day, a ceremony honoring heroes, defenders of the city, who fell at the hands of the SS punishers, was held on the territory of the Kharkiv Regional Clinical Hospital. Here stands the obscure obelisk “Mass grave of victims of fascism 1943 of the year” crowned with a small star. The quiet center of the city, not very passing, and in the new times the tragic events that occurred here 70 years ago, somehow began to leave the focus of public attention. Moreover, not so long ago, they actively began to build the building of the arbitration court - in fact, on the bones of the slain soldiers. In the three mass graves rest more than 1000 who took the truly martyr's death of the wounded Red Army soldiers of the 69 Army, medical workers, about a hundred soldiers of the Czechoslovak battalion.

Approximately 300 people were burnt alive by flamethrowers, there is evidence that Red Army soldiers were stabbed with hospital bayonets on hospital beds, and were bombarded with grenades. One of them was crucified - nailed to the gates of the barn. SS men were photographed against his background.

Germans committed atrocities here from 15 to 17 in March 1943. Thus, the tank crews of the Leibstandard-SS Adolf Hitler division under the command of Obersturmmbührer Schultz, who organized the massacre, eliminated the anger on our heroes, who had a week earlier strongly opposed them to Sokolov.

Recall that it was precisely with the liberation of Kharkov 23 in August 1943 that the Battle of Kursk ended. And already on September 7, the Extraordinary State Commission carried out the exhumation of one of the three graves on the territory of the regional clinical hospital, which was confirmed by Act No. 1 of September 07 1943 (stored in the Kharkiv city archive). This act, together with materials about the execution of almost 40 by thousands of Soviet Jews and citizens of other nationalities in Drobitsky Yar as evidence of Nazi crimes, was presented and voiced in 1946 at the meeting of the International Nuremberg Tribunal - in the list of crimes of Hitler’s Nazi regime in the Kharkiv region during German occupation.

An obelisk of black granite “Mass grave for victims of fascism 1943 of the year” was installed here in 1947.

In the event near the obelisk on March 8 with. took part in the Union of Soviet Officers, veterans, diplomats from the Russian Federation and the Czech Republic, the leadership of the city, as well as clubs historical reconstruction of Ukraine, Russia, Czech Republic, Slovakia, Bulgaria. Opening the rally, the deputy of the Kharkov mayor I. Terekhov said: “We want to express our fraternal gratitude to the Czech people, who, during the Great Patriotic War, put an end to fascism together with the Soviet people. Soviet and Czech fighters fought shoulder to shoulder and defeated this brown plague. Today, there are many young people who must take over from the older generation and never allow fascism to revive. ”

The Consul of the Russian Federation, V. Mokin, expressed his admiration for the fact that those who shared with them the bitterness of losses and the joy of victory over fascism are next to the Kharkiv citizens, who remember the price of victory over fascism. He expressed the hope that an information stand will be installed here telling about the tragedy that took place, indicating the names already established by the search engines.

The head of the Kharkiv association "For cultural and linguistic equality", the chairman of the coordination council of Russian organizations in Eastern Ukraine "Russian Veche" G. Makarov, recalled that three years ago, 9 in March 2010, at a ceremony in Sokolovo, the military attache of the Czech Republic was provided with documents testifying that the names of the 7-men from the Separate Czechoslovak Battalion, listed among the missing, are identified among those shot by the SS in Kharkov hospital. The documents and bodies of the Czech military were discovered during the exhumation of the mass grave of another 13 of September of 1943. This was confirmed by the testimony of the nurse E. Dmitrieva at the Nuremberg trials. Documents in 2010 were handed over to the Czech side by A. Konovalov, the daughter of one of the executed Red Army soldiers who rest in this mass grave. The names of those who were martyred and eternally rested here next to the Russian and Ukrainian fighters are now named. This is the foreman Volt Frenz, Sergeant Mikhail Horowenny, Sergeant Eric Fredal, Private Karl Friedrich, Private Bedrich Scharf, Private Joseph Koenig, Albert Körngau-Zentr.

At the rally, representatives of the Czech side made a remarkable proposal to install a new obelisk here. According to them, the draft of the monument on the initiative of the Czech government has already been developed and will be offered to Kharkov.

It was the Czechs at the rally who expressed the wish that the outcome of the Second World War was never revised. This sounded topical, especially against the background of the very recent decision of the Lviv Regional Council to increase the personal pension supplement to UPA veterans.

In the morning, a solemn opening ceremony of a memorial plaque took place on the building on ul. Shota Rustaveli, 10, where the headquarters of the Czechoslovak battalion Ludwig Svoboda was located in 1943. And on the initiative of the Czech delegation, an anti-fascist march from Vosstaniya Square - along Gagarin Avenue - to the airport took place at 18. From there, foreign and domestic participants in the historical reconstruction departed for Sokolovo. The column was headed by the banners of the branches of the Armed Forces of the USSR and the Victory Banner. Co-organizers of these two-day events marched from the Kharkiv side: veterans' organizations, the Union of Soviet Officers, reconstruction clubs Zvezda, Landmark and Samohod, residents of the city.

And 9 March already in Sokolovo itself honored the heroes who stopped the Wehrmacht’s tanks on the approaches to Kharkov. Gathered at the rally, it was recalled that the Czechoslovak battalion, which had received the baptism of the Czechoslovak battalion under Sokolovo, was formed in Buzuluk, in the Ural region, from patriotic refugees who did not accept the treachery of the US and British leadership, who surrendered their Czechoslovak homeland to German fascism.

The Czech government delegation led by the Deputy Minister of Defense, guests from Slovakia, representatives of the Russian consulate in Kharkov, veteran and Russian patriotic organizations of Kharkov, clubs for the reconstruction of World War II events from different countries, deputies, representatives of the Kharkiv Regional Council, leadership took part in the ceremony in Sokolovo. Zmiev district and the village of Sokolovo.

About a thousand people gathered on this frosty day at the Museum of the Combat Brotherhood, the main place in which is occupied by the diorama "The Battle of 8 March 1943, near the village of Sokolovo".

News agencies noted that on March 9, 2013 at the rally in Sokolovo sounded oaths in preserving the memory of the heroes who resigned to save the world from fascism. The ceremony participants also drew attention to the fact that flags of Ukraine, the Czech Republic and Slovakia were hoisted above the Museum of the Military Brotherhood in Sokolovo, but the flag of Russia, the official successor of the USSR, the winner in World War II, which carried the brunt of the war with fascism, is missing.

The ceremony of laying wreaths and flowers to the obelisk of the Czechoslovak-Soviet military fraternity. At the same time, the memorial wall with the names of the fallen Soviet soldiers, which turned out to be painted black, caused bewilderment.

Then the military-historical reconstruction clubs - about 400 people - conducted a large-scale game on a snowy field, as if returning the audience on those fiery days when 60 SS division tanks with air assault rifles and flamethrowers attacked Czechoslovak soldiers. Then, during the 5-hour battle, 22 German tanks, 5 armored personnel carriers and about 400 Nazis were destroyed. In particular, the feat of arms of the 1 of the Czechoslovak company under the command of O. Yarosh is noted, the fighters of which 8 of March 1943 of the city laid down their heads almost all. Twice wounded nadporchik Yarosh, who continued to command the company and firing, died, undermining a German tank that had broken into a village with a grenade.

The fraternal unity of the Slavic peoples, associated with the memorable celebration of the 70 anniversary of the general anti-Nazi military struggle, left an indelible warm impression on all participants in the two-day celebrations. However, the Kharkov Union of Soviet Officers did not stop at fixing the event, and on March 19 received an appeal at its meeting at the head of the regional state administration M. Dobkin, in which he summarized the observations, perplexities and suggestions that were issued following the results of the past celebrations.