April 4 2013
90
Russia currently has 1 thousand 480 deployed nuclear warheads, and Washington has 1 thousand 654, the US Department of State said on Wednesday.


The data is presented in the next certificate on the implementation of the Russian-US Treaty on measures to further reduce and limit strategic offensive arms (the new START). 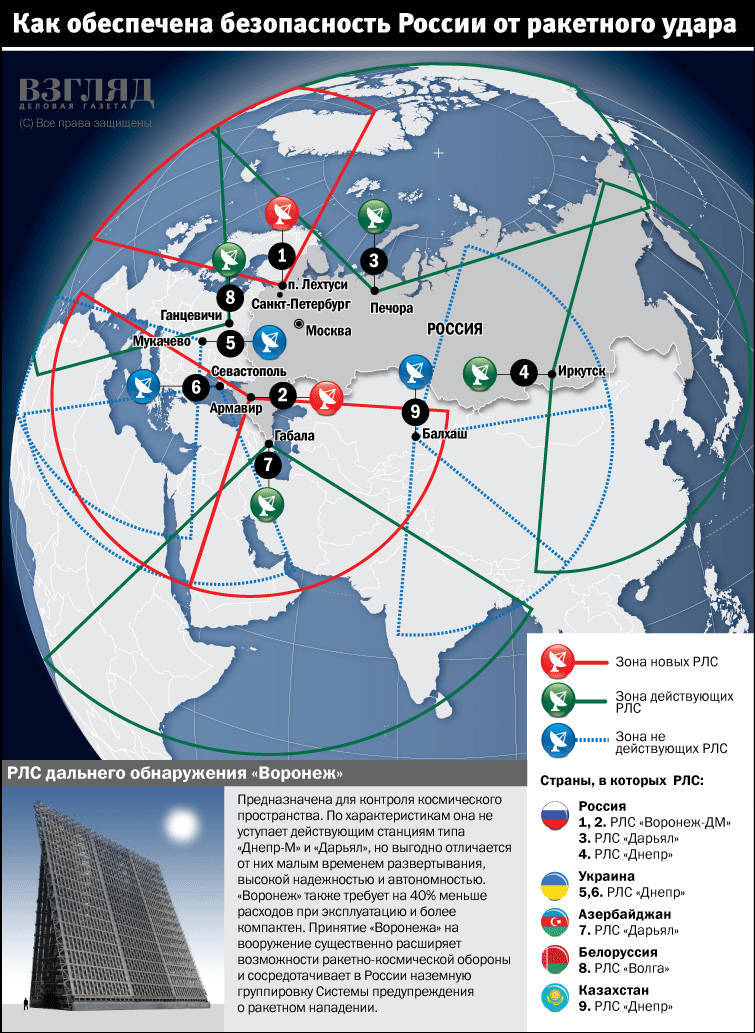 How is Russia secured against a missile strike (click to enlarge)

According to the US Foreign Ministry, 492 is now in service with Russian operational deployed carriers of nuclear warheads, including intercontinental ballistic missiles (ICBM), heavy bombers (TB) and ballistic missiles on submarines (SLBMs). The US has such carriers now 792. In addition, as clarified in the State Department, in general, deployed and non-deployed launchers of ICBMs, SLBMs and TB in Russia are 900, in the USA - 1 thousand 28.

The certificate provides information as of March 1 of the current year. It reflects the official statistics provided by the parties to each other, ITAR-TASS reports.

The new START Treaty was signed on April 8 on Prague 2010 by Presidents Dmitry Medvedev and Barack Obama. It entered into force on February 5 2011. The contract provides that each of the parties reduces its strategic offensive arms in such a way that seven years after its entry into force and subsequently their total quantities do not exceed: 700 units for deployed ICBMs, TB and SLBMs; 1550 units - for warheads on them; 800 units - for deployed and non-deployed launchers of ICBMs, SLBMs and TB. The treaty obliges Russia and the United States to exchange information on the number of warheads and carriers twice a year.

# {weapon} As stated a couple of weeks ago and. about. US Undersecretary of State for Arms Control and International Security Rose Gottemoeller, Washington is consulting with Moscow on how the new bilateral agreements on further reducing nuclear weapons.

“We are currently studying how the future agreement with Russia can look like and how to include (in possible new agreements) all categories of nuclear weapons: strategic and non-strategic, deployed and non-deployed,” said and. about. deputy head of american diplomacy.

Speaking in February in Congress with the annual message “On the situation of the country,” Obama confirmed that the United States intends to “cooperate with Russia, seeking further reductions in our nuclear arsenals.”

According to publications in the American press, the United States government came to the conclusion that it could effectively ensure the implementation of its nuclear doctrine even with a further reduction in the number of operational deployed strategic offensive arms to the level of 1 – 1,1 thousand units.

Ctrl Enter
Noticed oshЫbku Highlight text and press. Ctrl + Enter
We are
Russia and the United States caught up in the number of nuclear weaponsMoscow now has 1492 deployed nuclear warheads, Washington - 1737, the US State Department reported
Military Reviewin Yandex News
Military Reviewin Google News
90 comments
Information
Dear reader, to leave comments on the publication, you must to register.