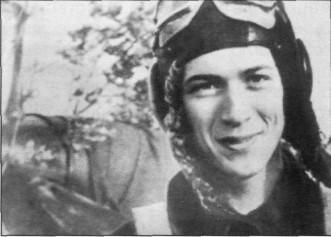 ... In the 30s of the last century, many Kharkov newspapers wrote with some pathos and enthusiasm characteristic of the Soviet press about the opening of the first All-Ukrainian flying club in the southern republic. The enthusiasm was, in general, understandable: air transport at that time was actively developing, helping to explore the vast expanses of the young Soviet state, without aviation it was impossible to imagine agriculture, military industry. The ideological campaign in support of developing aviation was carried out on a large scale - editorials in newspapers, radio broadcasts, speeches of leaders ...


Probably, succumbing to this particular call - “Komsomol member on the plane!”, The young Boris Mefodievich Gomolko signed up for the Kharkiv Aero Club. The lessons in him helped Boris to further enter the Armavir Military Aviation Pilot School.

A month after the start of the war, Boris Gomolko entered the service in the 520 th Fighter Aviation Regiment, commanded by Major Stepan Nikitovich Chirva.

The regiment in August 1941 of the year was formed in Rybinsk (initially consisted of LaGG-3 planes, fighters having the naming of "grand pianos" or "irons" among the pilots). The regiment began the war on the Volkhov front, and since mid-April 1942, it was based in the Saratov region, in the village of Balanda. Here, the 520-iap is equipped with the Yak-1 aircraft, including improved and faster vehicles. Accordingly, the retraining of flight crews on the new Yakis also takes place.

Already in the first days of September, the 1942, the 520 th regiment, flies to Kamyshin city, near Stalingrad, at Vihlyantsevo Airport. The task assigned to the pilots of the Supreme Commander is serious enough: to keep the enemy army on the outskirts of Stalingrad, to prevent the German troops from reaching Kamyshin, that is, to the Volga.

Despite the fact that the war had already lasted more than a year, the Germans still held air supremacy. The Soviet aviation units needed more airplanes, young pilots - graduates of aviation schools and colleges - sometimes they lacked combat experience. And working out methods of piloting, air battles, navigator training and flights in the group - all this had to be worked out at advanced, front-line airfields, directly in combat ...

The Vihlyantsevo regiment together with the 431-IAP and 563-IAP is part of the 283 Air Division. The divisional commander, Colonel V. A. Kitaev, gives the order to cover Kamyshin with couples for several days: this allowed the entire technical staff to pull up onto the airfield, while the pilots could get acquainted in detail with the area of ​​future military operations and conduct airborne training.

On September 7, the command received instructions to relocate to the Altukhovo airfield (located only 7 kilometers from the command post of the 16 Air Army). 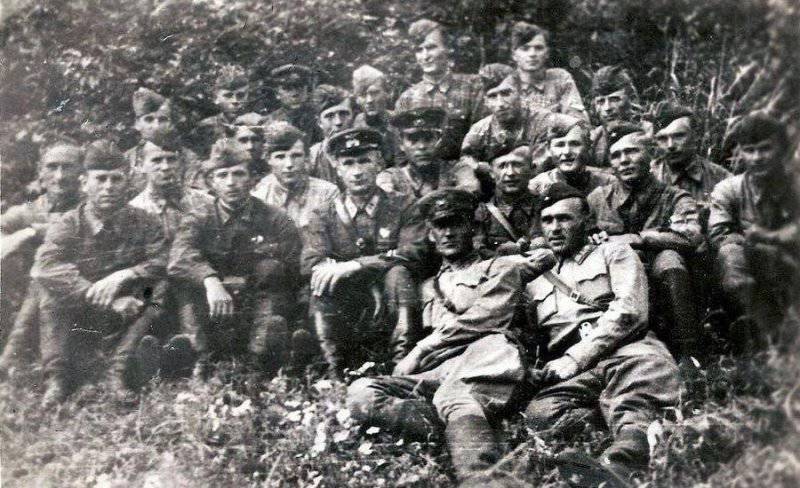 Group of pilots from the 520 th Fighter Aviation Regiment

And the next day can be restored in some detail from the descriptions of eyewitnesses. Major Chirva flew with the first group of aircraft in the 11 area around one o'clock in the morning, brought them to Altukhovo, and followed the second division. When approaching Vihlyantsevo, Chirva heard the rumble of German bombers approaching the aircraft - there were ten Heinkels-111s in total, at the height of 2000-2500 meters: they flew to bomb Kamyshin.

The decision of Chirva was made instantly - to attack the enemy. The order of the group commander (consisting of ten planes) to start the pursuit of German bombers by a “right turn with climb”. The first Heinkel was shot down by Major Chirva himself, and seeing such a rapid onslaught of Soviet aviation, the Germans did not stand up and turned around, having lost their combat order, randomly flew back.

Soviet pilots, however, continued to attack. Senior sergeant Boris Gomolko boldly rushed to the attack, shot down one plane, and even having spent all the ammunition, he did not leave the battle. Heading toward the second bomber, he comes close to him and he cuts off his tail. Another Heinkel goes to the ground ...

The plane of Boris Gomolko himself suddenly begins to fall apart right in the air, and the hero has no choice but to leave the flight machine by parachute.

Interestingly, this feat Gomolko is not exhausted. Down on the ground, he sees as close to him - just as two parachutes descended on parachutes. The reaction of Boris was lightning-one German he immediately kills a pistol. The second Gomolko captures and leads to his unit.

For some reason, in different sources, different discrepancies concerning how much Boris Mefodevich has captured a man write that he alone has almost captured a group of German officers. For example, the front-line correspondent of the newspaper Krasnaya Zvezda N. N. Denisov in his book 1418 days of the front-line correspondent writes: “We were present at the interrogation of one of these pilots, the lieutenant. The squadron in which he served, suffered more than three hundred percent loss - its composition has recently been updated three times by aircraft and crews. Of the other prisoners of the Hitlerites, I remember Ober-Lieutenant ... a red-haired fellow with a fleshy face and running watery eyes. He said: "We did not think that the Russians would be so stubborn." 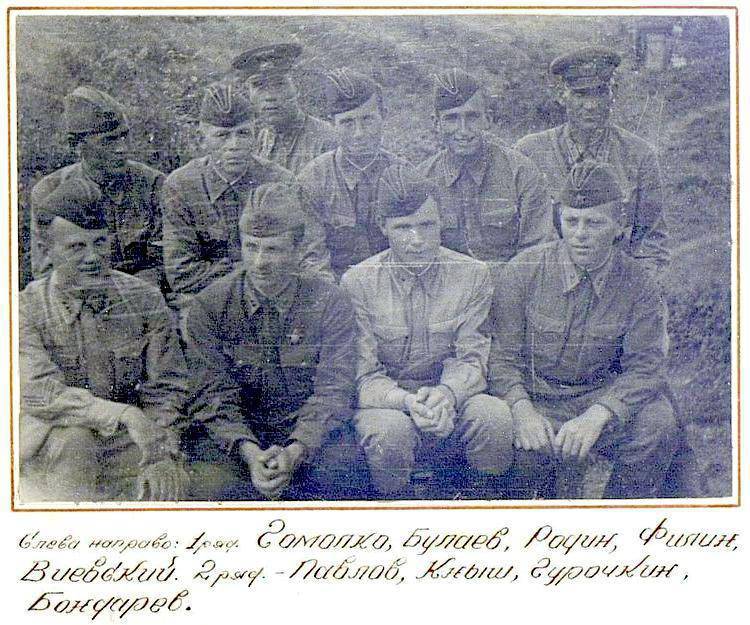 After spending a few days in the infirmary, Gomolko again flies up in the air on an airplane, already in the new post of flight commander. And continues combat sorties, knocking down the next enemy bombers. However, unfortunately, the hero did not have long to fight ... 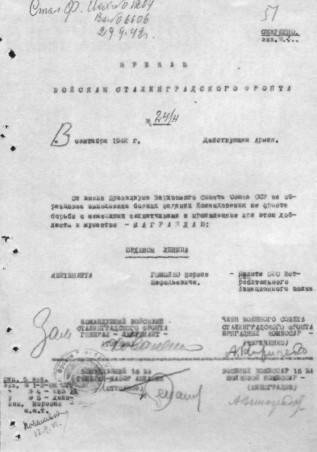 Order №247 People's Commissar of Defense of the USSR

about courage and courage shown by the 2 th squadron of the 520 th fighter air regiment by senior sergeant B. Gomolko in aerial combat

Senior Sergeant Gomolko Boris Mefodievich, making his first combat flight, crashes into their ranks and fires machine guns and cannons to shoot down one He-111, in subsequent attacks, having spent all the ammunition, went on a ram of another bomber.

A propeller and a motor chop off the tail of the Xe-111, causing the enemy's bomber to collapse in the air and fall.

Senior Sergeant Gomolko, landing on a parachute, prepared to meet the Nazi pilots descending on parachutes, while trying to resist them, shot one pilot, and captured the other.

Tov. Gomolko, as the true son of his homeland, showed exceptional heroism and courage.

This heroic deed com. Gomolko confirms once again that who, sparing no effort, despising death, selflessly shows courage, resilience, courage and heroism, he always seeks victory over the enemy.

It is a matter of honor and valor of the entire flight personnel of the Air Force of the Red Army - to beat the fascist air pirates, as their senior sergeant Gomolko beats.

Order to read the entire staff of the Air Force of the Red Army.

In military sources there is a confusion with the date of death of Boris Mefodievich. The fact is that his namesake, also a pilot, Alexander Gomolko died at the Kursk Bulb 12 in July 1943. The hero of our story died 24 September 1942 of the year.

On this day, on the next combat mission (also not far from Stalingrad) together with the 563 iap pilots, Gomolko confronted a squad of twenty German Me-109 fighters. In the course of a hard fight, Boris Mefodievich is seriously wounded, but he nevertheless manages to land his plane. The pilot’s injury, however, was so serious that the doctors of the hospital, where an ambulance car quickly brought him from the crash site, could do nothing: Boris Gomolko dies.

Gomolko was buried in Altukhovo, near the sanatoria located here during the war years. Later, in the 70-s, the remains of Boris Mefodievich and other fighters were reburied in a mass grave of Soviet soldiers of the October settlement, in the Volgograd region ... 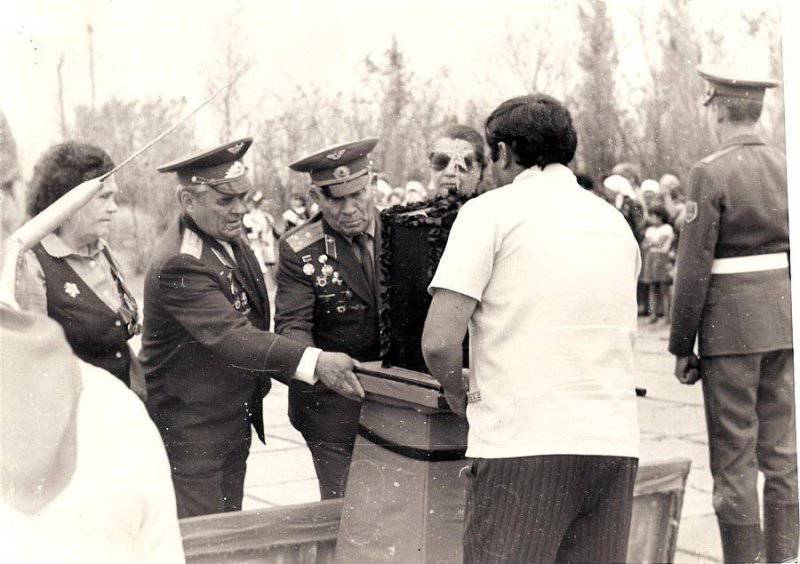 Reburial of the remains of the pilot in the village of Oktyabrsky, Olkhovsky district of the Volgograd region